KTVU sports director Mark Ibanez sits down for an interview as he's set to retire after 43 years at the station. He talks about the Bay Area's golden age of sports, how he became interested in the subject, and his first sports idol, Willie Mays.

OAKLAND, Calif. - When KTVU Sports Director Mark Ibanez signs off for the final time on Thursday night, it will mark the end of a storied and illustrious career, a career that spanned almost 43 years at one place, from where he informed, entertained, and connected with two generations of Bay Area viewers.

He’ll walk off the anchor set as the longest tenured Bay Area sportscaster in history, and for many who have for years turned to him for their sporting news, his departure from their nightly newscast will signal the end of an era.

Ibanez began at KTVU in 1979, when the now Fox-owned station was an independent broadcast entity. 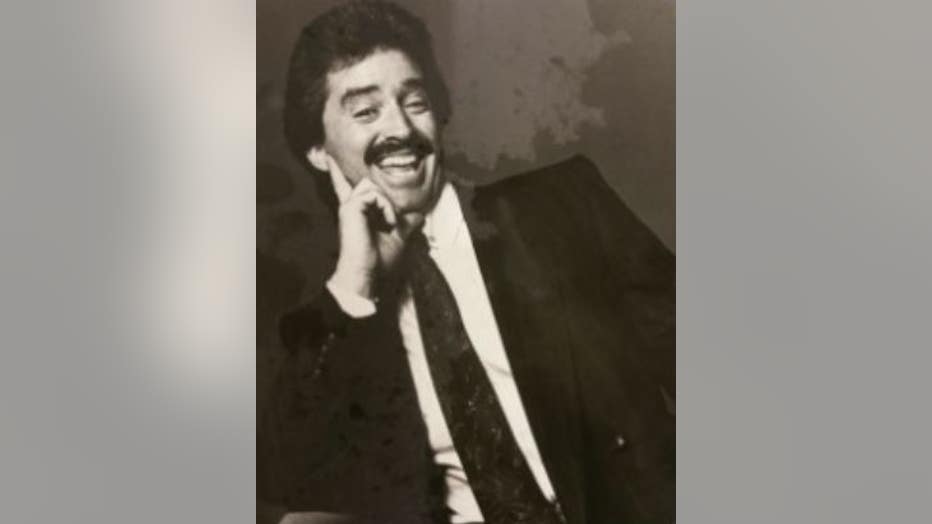 Back then, it was the television home of the San Francisco Giants. It’s where legendary anchor Dennis Richmond delivered the news. The station was known for popular television series including "Captain Cosmic," "Creature Features," and the beloved children’s show "Romper Room" with Miss Nancy. 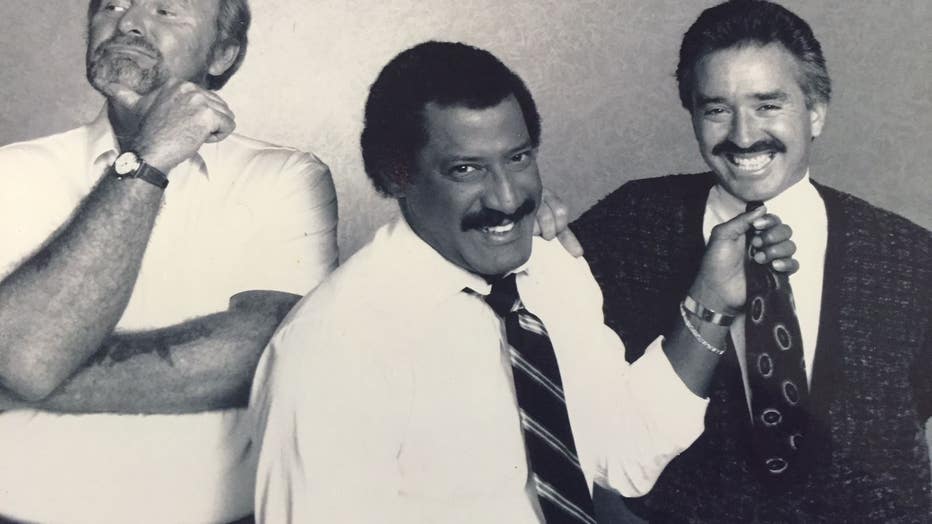 For Ibanez, who grew up in the Bay Area watching Channel 2, he had landed his dream job at the station of his childhood and was covering the sports teams he had followed his whole life.

For the next four decades, Ibanez would report on the biggest wins, the most heartbreaking losses, and everything in between. He provided KTVU viewers access to Hall of Famers and told of their record-setting performances. 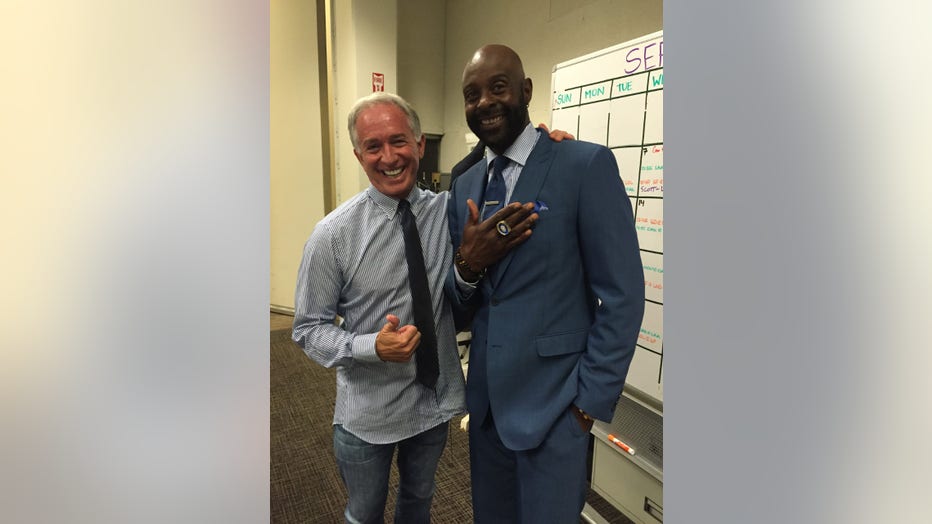 He’s covered nine Super Bowls and eight World Series. In 1982, he was on the sidelines at Candlestick Park for "The Catch," standing some 20 feet away when Dwight Clark caught the game-winning touchdown from Joe Montana in the NFC Championship Game, a moment which set in motion a 49ers dynasty.

Also in 1982, he was in the press box when the Stanford Band ran onto the field during the Big Game at Cal’s Memorial Stadium in what would later be known as "The Play." In October 1989, he was there for the Earthquake Series when the Bay Area came to a devastating halt. The A’s would later sweep the Giants in four games to capture their fourth World Series title in Oakland. 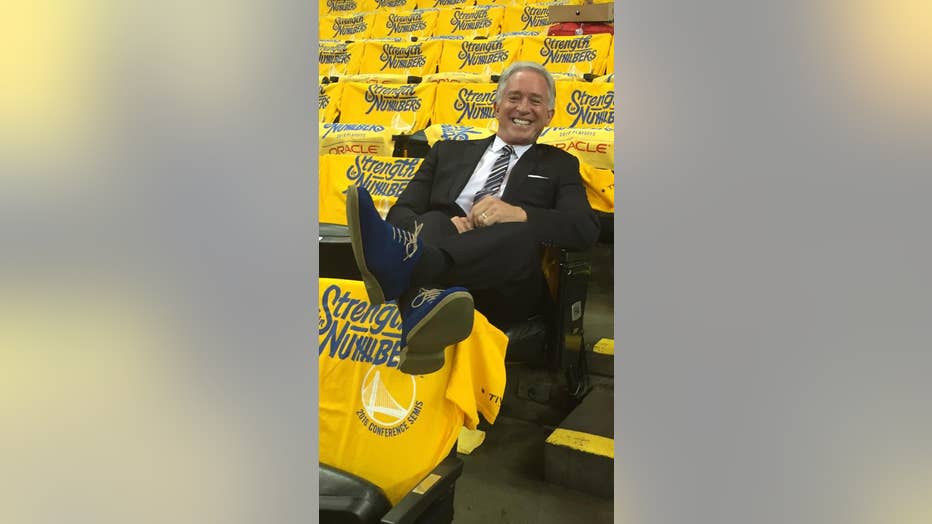 KTVU Sports Director Mark Ibanez at Oracle arena covering the Warriors in the NBA Western Conference Semifinals in May 2016. 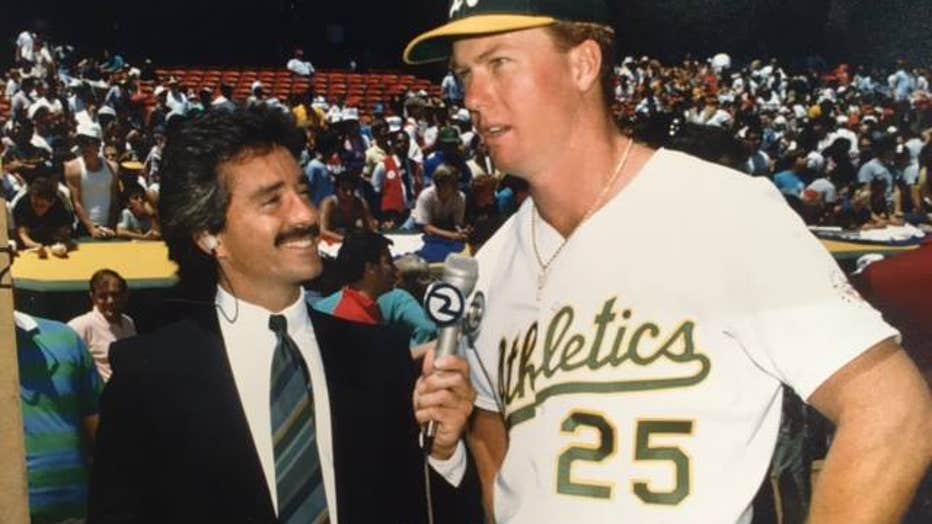 A playback of his career would show like an incredible highlight reel of the most iconic moments in Bay Area sports history.

When asked what the most momentous events were for him along the way, he did not hesitate in his answer: "I would say the things that have made the most impact on me are covering the five Super Bowl victories by the 49ers." 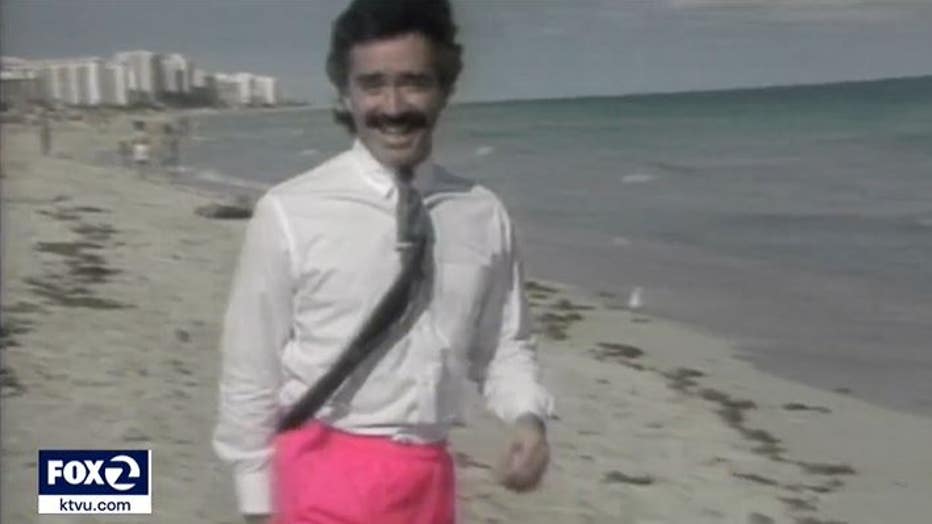 The veteran sports anchor noted though, that every one of the nine Super Bowls he’s covered has been a thrilling, unforgettable experience.

"They’re just such a spectacle. And just all the pomp and the ceremony, and all that goes with it. It’s one of those things that’s indelible," he shared as he looked back.

And when the team you're covering won, the experience was elevated to an indescribable shared journey, he said.

"For some reason there is just kind of exterior exhilaration that kind of rubs off on you," Ibanez reminisced, noting it was that same feeling when the Giants and A’s won. "It leaves you feeling exhilarated like you accomplished something because you followed the journey of these teams all the way." 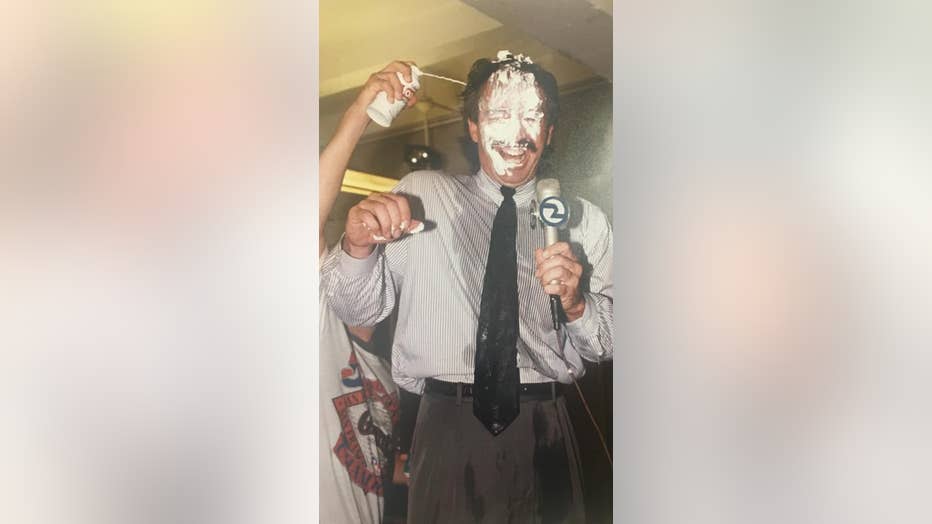 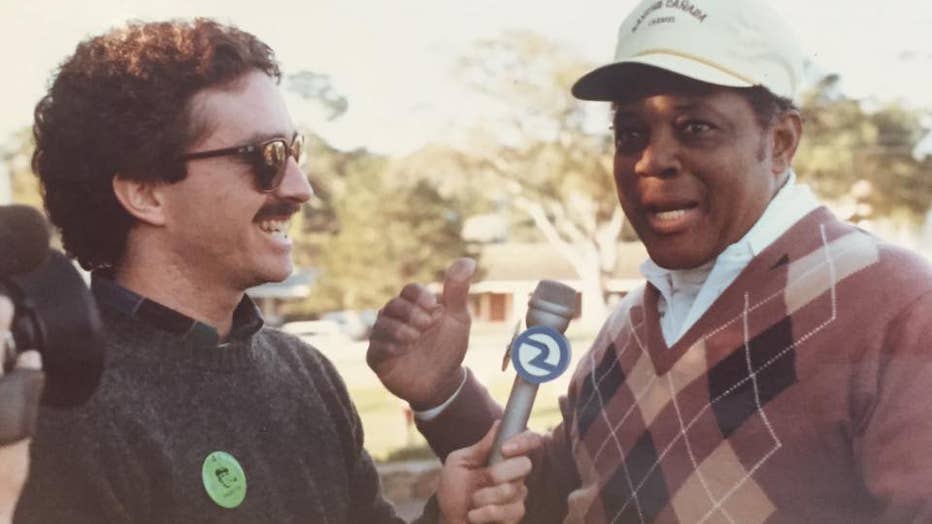 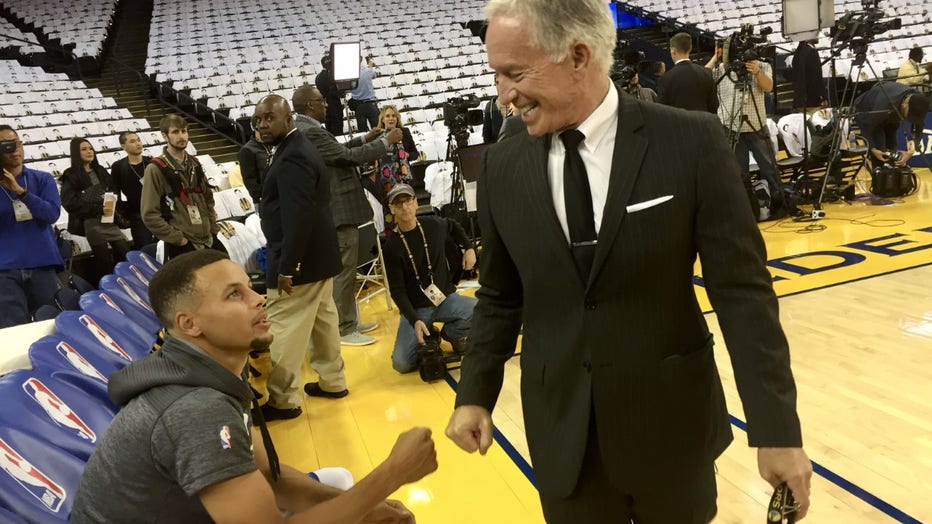 But the interview that has stood out for him was one he said, that wasn’t even a one-on-one. It was a group interview where a mass of media, as well as some of the biggest names in sports, had gathered for a chance to talk with basketball great Michael Jordan.

"I got to interview Michael Jordan after his last game in Oakland when he came through with the Bulls, and he announced he was retiring," Ibanez recalled. "And the reason it left such an impression on me is there were others… like Tony LaRussa was in the room, Rickey Henderson, Dusty Baker, a couple of Giants players, and I noticed as I was looking around the room that they were looking at Michael Jordan in awe, like their jaws were basically dropped down, just staring at him."

He said it was clear at that moment he was witnessing something extraordinary. "I’m thinking, ‘Oh my God these people are superstars in their own sports, and they are looking at this guy like he is a deity. And he has such power over everything,’" Ibanez shared. "I just thought, wow. I am meeting and seeing somebody incredibly special to have other superstar athletes in awe. And that always stood out in my mind as pretty amazing," he said.

For those who want to know the secret to such a successful and long-lasting career, Ibanez said that for him, it was about being driven by the true passion he had for sports coupled with his interest in people and their journeys.

"I’m really, consider myself to be anyway, a people person. I really like learning from people and hearing their stories," he shared. "I always say, it’s not so much the end result, not the wins, the championships. It’s the journey of the individuals, how they got to this pinnacle of sports and what has separated them. And even if they aren’t champions, they've got so many incredible stories."

And in classic Mark Ibanez humor, he also offered this tip for achieving career longevity: "Lay low at work, and stay out of the fray of the gossip and office politics."

For his colleagues in the newsroom, the part about him being a people person resonated as a solid reason for his historic run as a Bay Area sports personality. 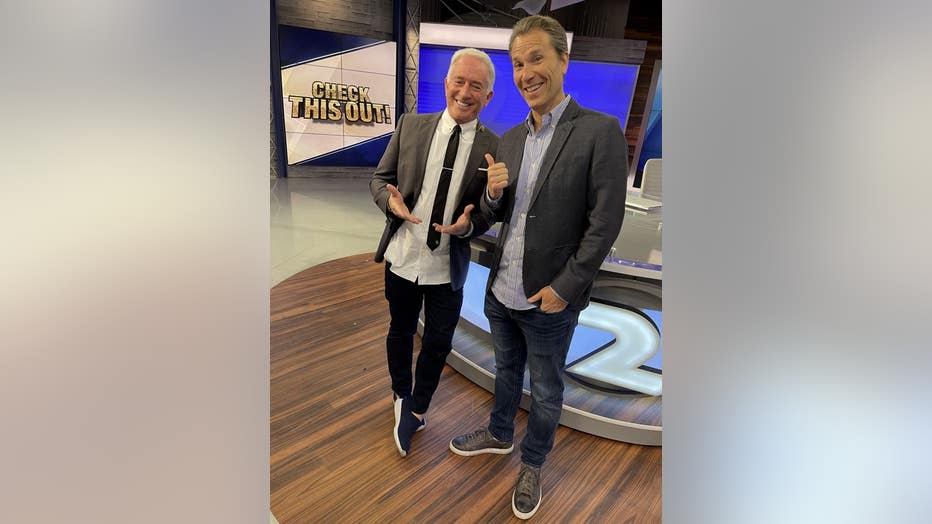 His down to earth demeanor created an easy avenue to connect for the subjects he’s covered, as well as his viewers at home. The person the television audience saw on the other side of the camera was always the person who showed up for work that day. And for many of his colleagues, it’s often not until walking out of the newsroom with him that they’re reminded of his celebrity status in the Bay Area. 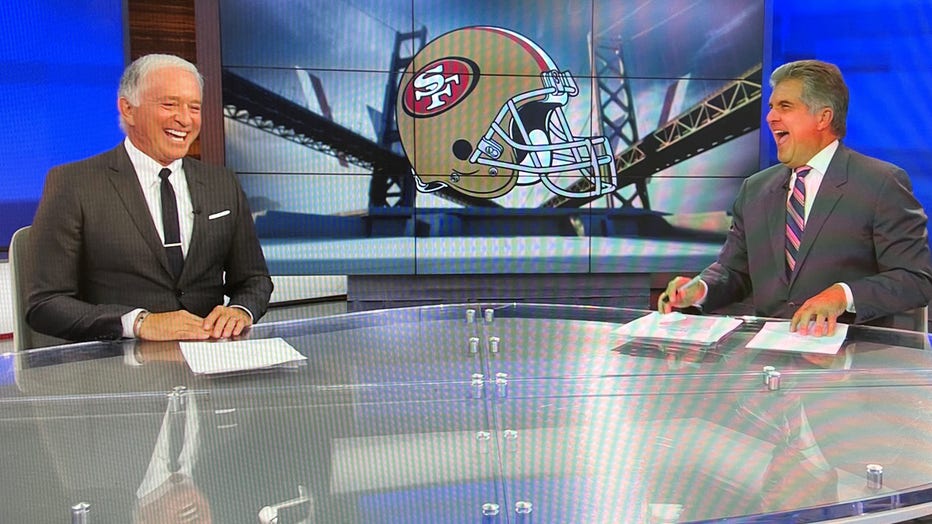 His affable, upbeat disposition has long translated through the television screen, offering his audience the feeling that they knew him as a friend.

To his viewers, he’ll also be remembered for his depth of knowledge in sports and his consistent, dependent delivery. Some very long-time viewers may conjure up images of him with his trademark 80's-style mustache when they think of him on the anchor desk. 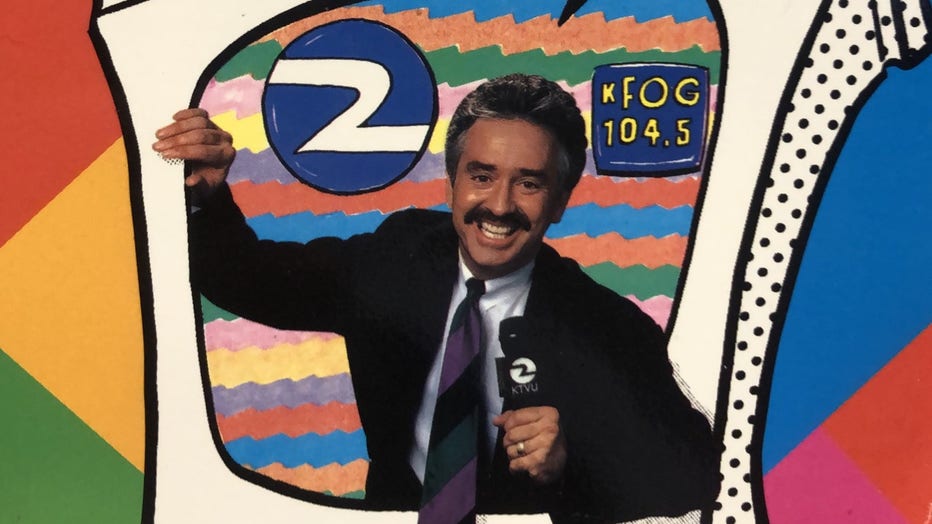 KTVU Sports Director Mark Ibanez on the cover of his book "Mark's Remarks." On Thursday, March 31, 2022, the legendary sports anchor will be retiring from KTVU after a 43-year career at the Oakland station.

Many others will be reminded of his sharp sense of fashion, as he’s been arguably one of the best dressed television personalities in the Bay Area.

Still, others will consider how he adapted to the changing and life-altering times brought on by the pandemic. With the onset of COVID-19, while newscasts were being broadcasts from anchors’ and reporters’ homes, Ibanez took it to the next level and invited KTVU viewers into his music sanctuary he dubbed "The Vinyl Room," where he would change out and display some of his most treasured records from his vast music collection. 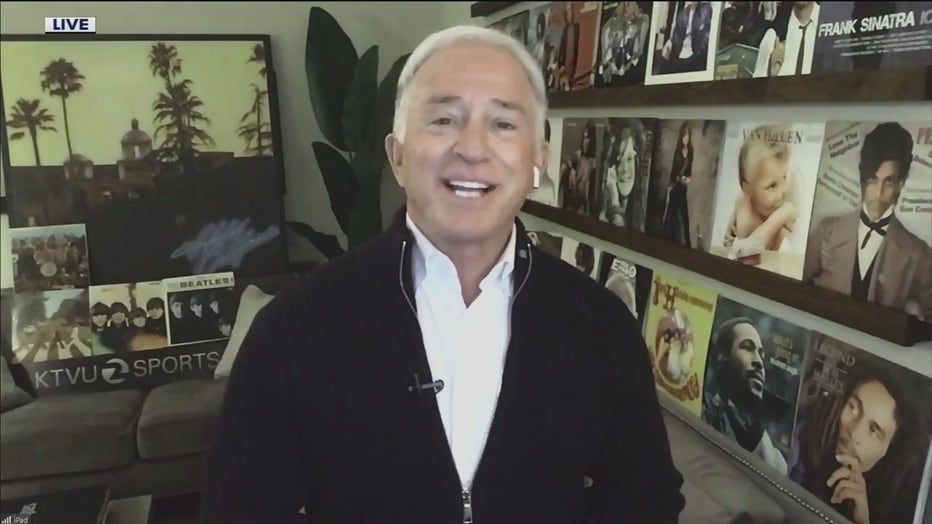 KTVU sports director Mark Ibanez on his final night of broadcasting remotely from the vinyl room.

As Ibanez looked back on what he’ll miss and remember the most, he said it’s the connections and relationships that he’s made at KTVU.

"Unquestionably Channel 2 has been my second family," he shared.

Over a span of 40-plus years, a lot of life happens. Ibanez said that it was during some of the hardest periods of his life when he was most grateful for the job and for being able to deliver the sports to his audience.

"I'm super thankful that I had the people at Channel 2. They always helped me get through the downtimes when sports was kind of like the last thing on your mind," he said. "I could go into work and at least escape for a few hours. The bonds that I’ve connected here are lifelong."

And what will life after KTVU look like for Mark Ibanez? He'll certainly have more time to spend with his family, including his wife Tina, four children and grandkids. He said stepping away from the anchor desk will allow him to take a long, extended vacation, perhaps to one of his favorite places, Hawaii. And it will involve truly relaxing by detaching himself from the pressures of time.

"In our business there’s constant deadlines, and I just recently became conscious of myself and my behavior of always looking at the clock, like always glancing at my phone for the time or glancing at the wall for the time," he said.

For a man who enjoys being active, moving on from KTVU does not mean retirement, nor a life of total leisure. He plans to apply the things that made him successful and happy in his long career to his next chapter.

"I’m never going to be that guy on the couch drinking beer. I'm gonna find something that uses my love of people and communicating and keep myself busy with just less deadlines, and you know, maybe do some work that’s maybe a little more altruistic."

Ibanez, whose youngest son is autistic, added that he’d like to use his skills to make a difference in the lives of other families with similar experiences. "Maybe be a spokesperson for autism or something like that, that I could really help other people, young families going through that kind of a diagnosis."

For now, Ibanez can bask in the glow of what has been an exceptional, remarkable career, one that brought him into countless homes across the Bay Area. For years, with every sportscast, he’s closed with his signature sign-off which began with the words, "And that is the sporting life…"

As he prepares for his final show, his viewers can expect one last Ibanez sign-off, and many will no doubt be thanking him for the "sporting life" he gave to the Bay Area. 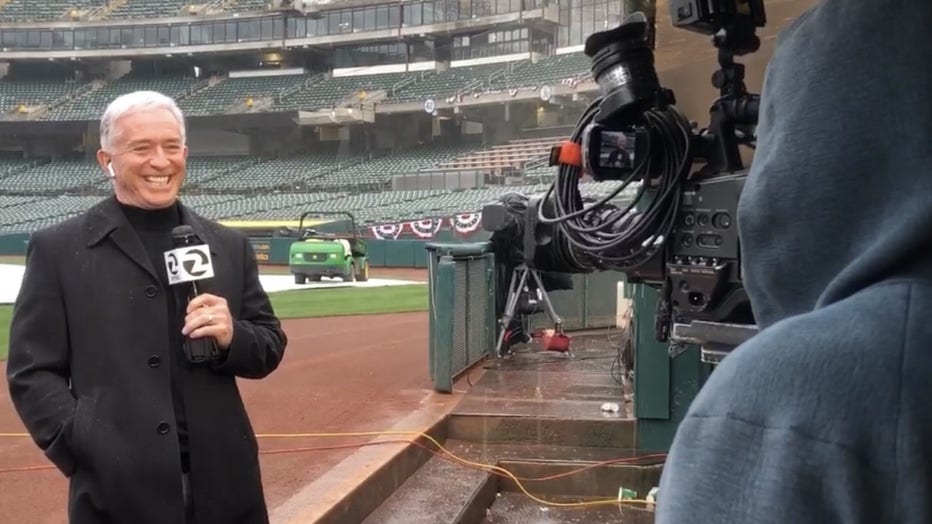 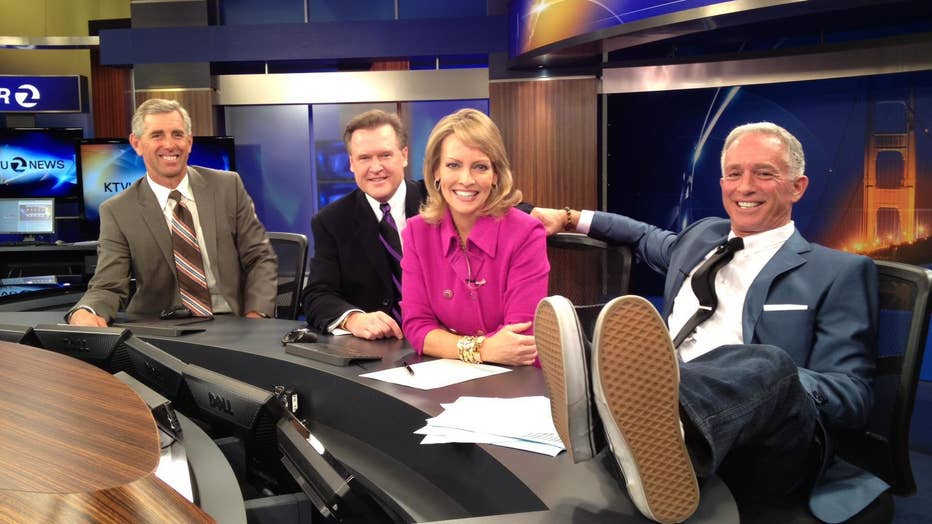 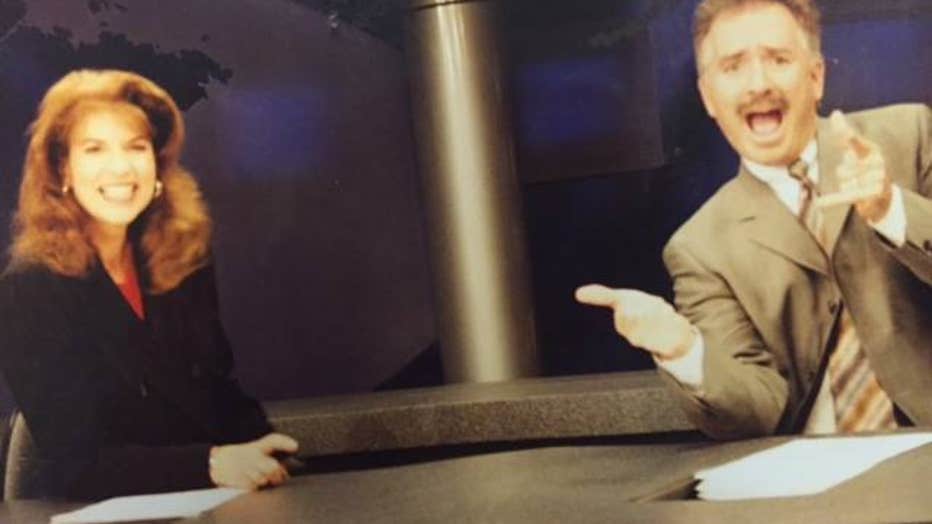 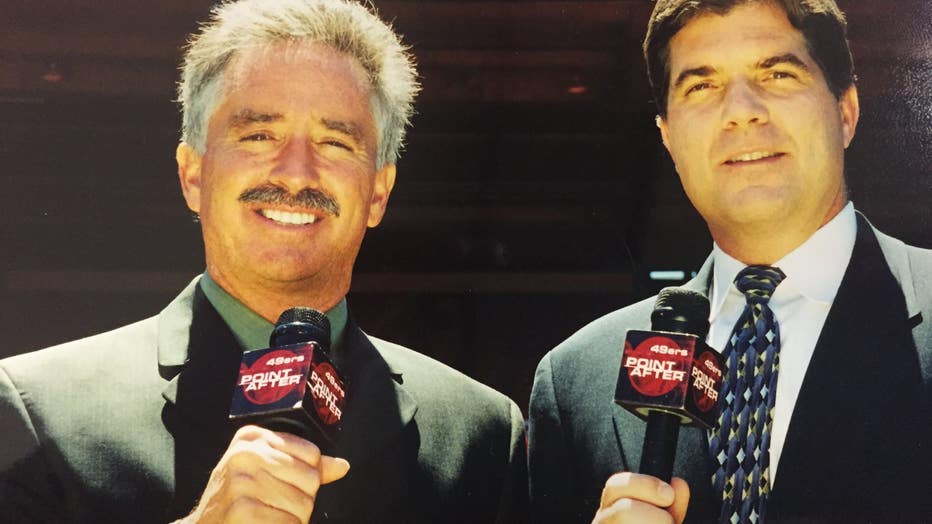 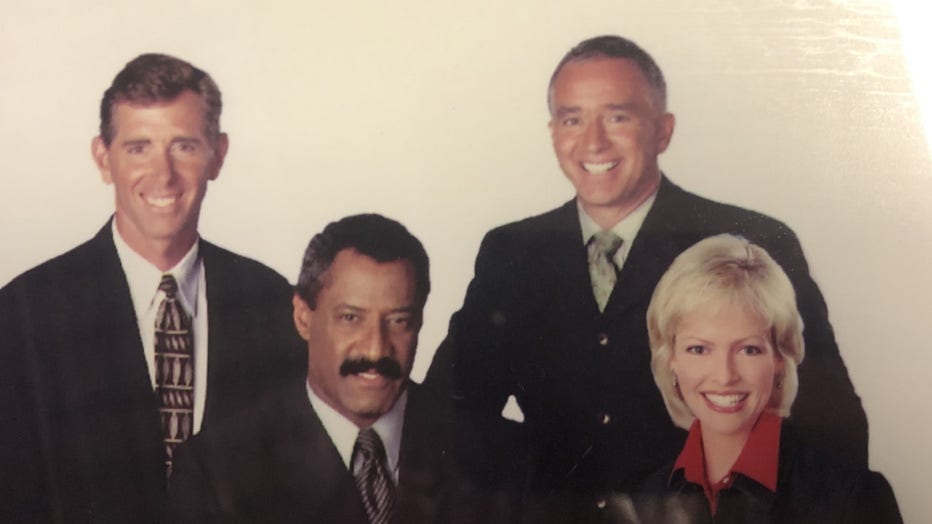 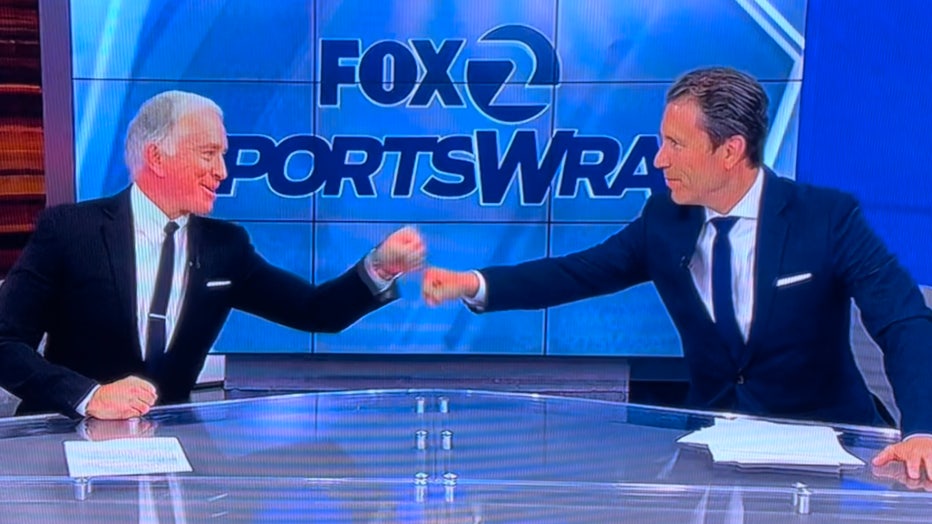 Mark Ibanez and Jason Appelbaum on the set of Ibanez's final appearance on KTVU's SportsWrap on March 27, 2022. 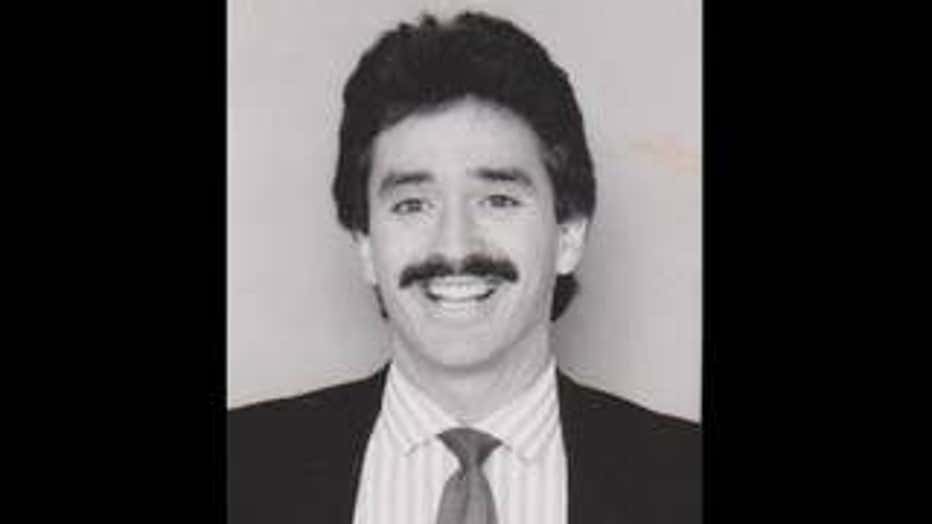 From the archives: KTVU Sports Director Mark Ibanez with his trademark mustache. 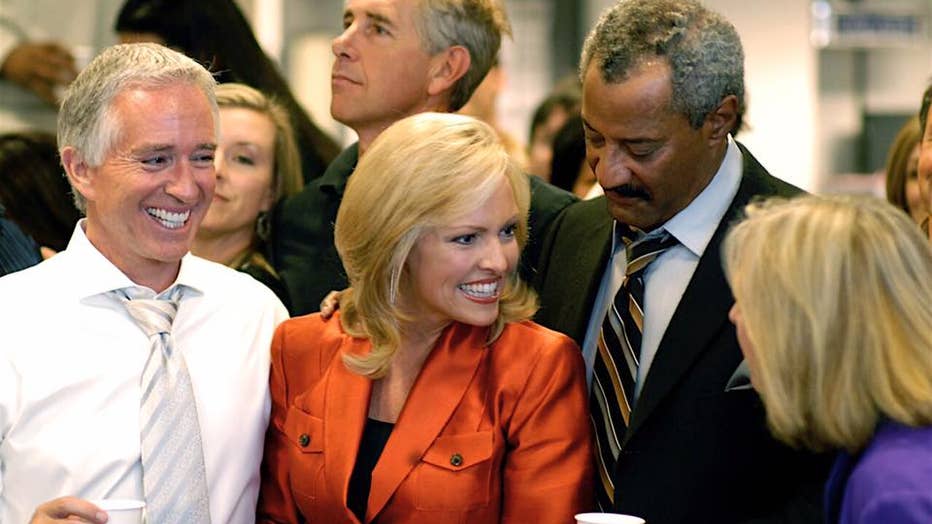 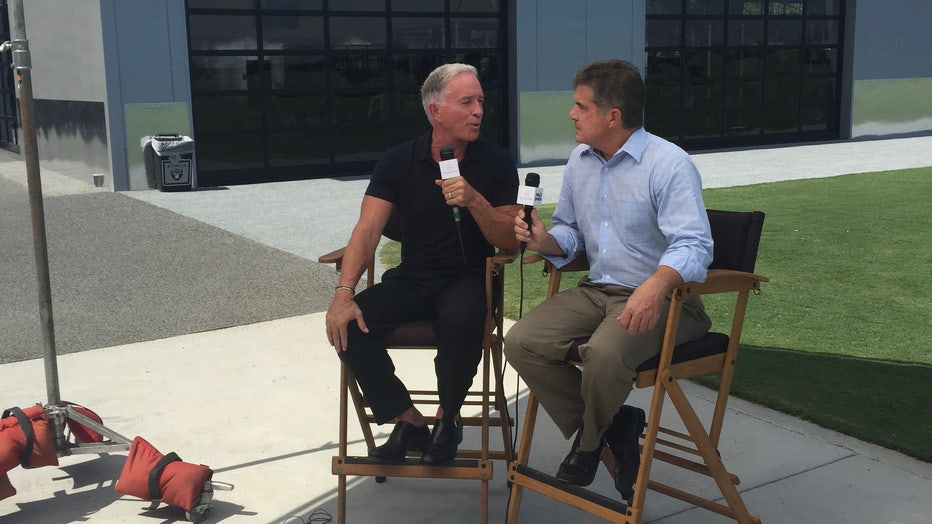 KTVU sports anchors Mark Ibanez and Joe Fonzi in Alameda, Calif. at the former headquarters of the Oakland Raiders on Aug. 27, 2015. 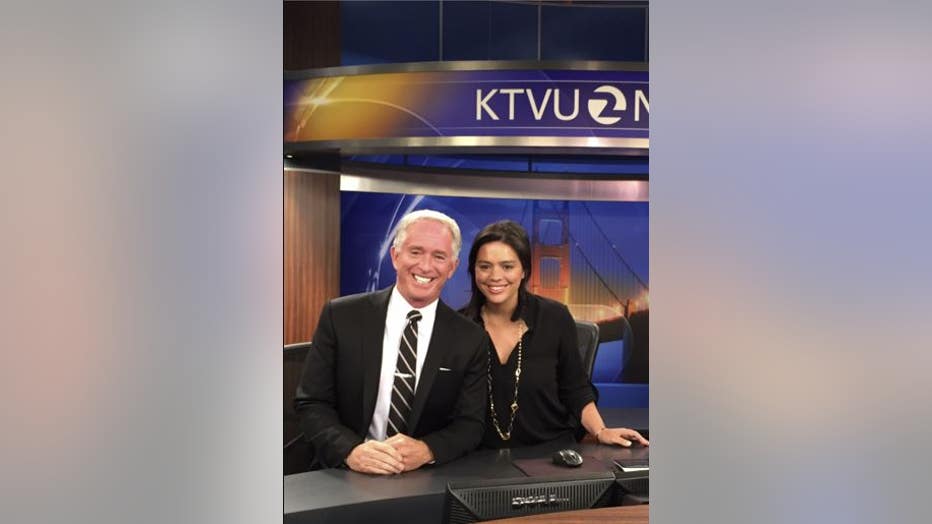 All in the family: KTVU Sports Director Mark Ibanez on the set with daughter Rachel Ibanez Geranen, the producer of KTVU's 10 O'Clock newscast. 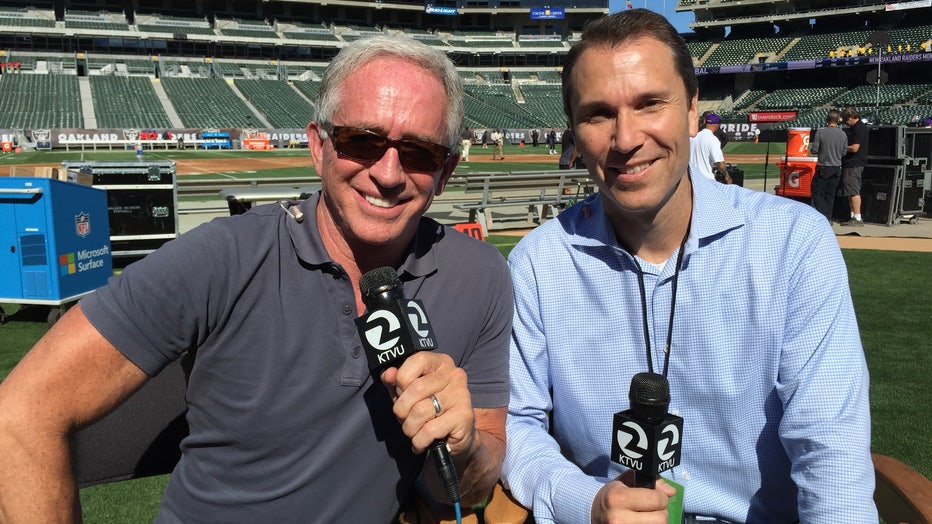