Biden says issue of Trump impeachment up to Congress

President-elect Joe Biden said the issue of a possible second impeachment of President Donald Trump is a decision left for Congress and declined to weigh in.

A Biden transition official said the incoming president plans to move quickly on pushing for $2,000 direct payments to Americans. The pause on student loan payments, which is set to expire at the end of the month, will be extended further under the Biden administration, David Kamin said.

"In addition to the package the president-elect will be releasing, we will be taking a series of additional steps to help those in need," Kamin said. "To get our economy moving and keep Americans afloat, we will also take a series of steps including alleviating the crushing financial burden of student debt."

"Today we’ve announced that on day one, the president-elect will direct the department of education to extend the existing pause on student loan payments and interests for millions of Americans with federal student loans. This is in addition to expanding income-based repayment programs and fixing and expanding loan forgiveness programs for those with public service jobs," Kamin said.

Kamin also reiterated Biden’s plan to forgive up to $10,000 in federal student loan debt for every borrower as a response to the COVID-19 pandemic.

Under the HEROES Act, economically distressed borrowers would immediately have $10,000 in student debt forgiven. The government would also cover monthly loan payments for people with private student loans until September 2021 and forgive $10,000 of their debt. 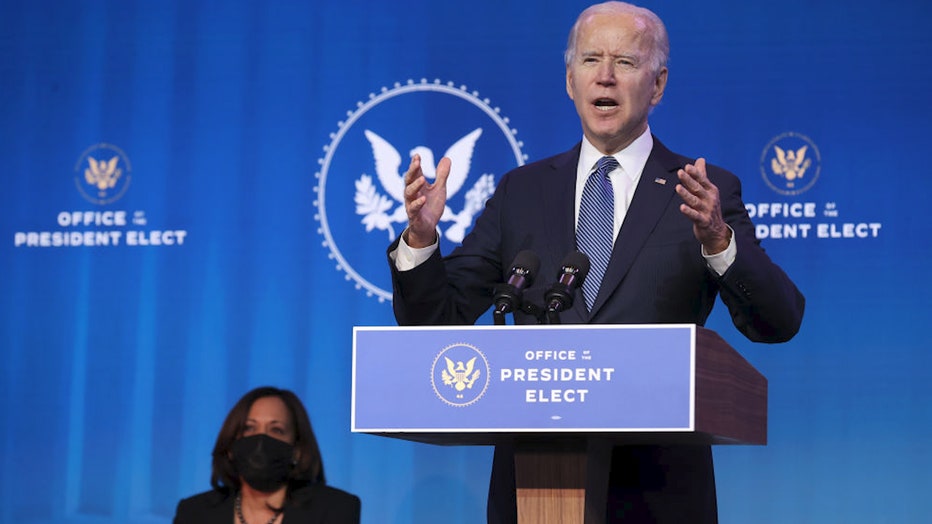 U.S. President-elect Joe Biden delivers remarks as vice president-elect Kamala Harris looks on before announcing his choices for attorney general and other leaders of the Justice Department at The Queen theater Jan. 07, 2021 in Wilmington, Delaware. (Chip Somodevilla/Getty Images)

But progressive Democrats are urging Biden to move further left on the issues: Sens. Chuck Schumer, D-N.Y., and Elizabeth Warren, D-Mass., have urged the incoming president to bypass Congress and cancel $50,000 in loan debt per borrower on his first day in office.

They maintained that Biden could use existing executive authority under the Higher Education Act to order the Department of Education to "modify, compromise, waive or release" student loans. A broad cancellation of student loan debt would free up about $200 to $300 per month for millions of Americans, according to a joint op-ed published by the senators in December.

"We have come to the conclusion that President Biden can undo this debt, can forgive $50,000 of debt the first day he becomes president," Schumer said Monday, speaking to reporters outside of his Manhattan office. "You don’t need Congress. All you need is the flick of a pen."