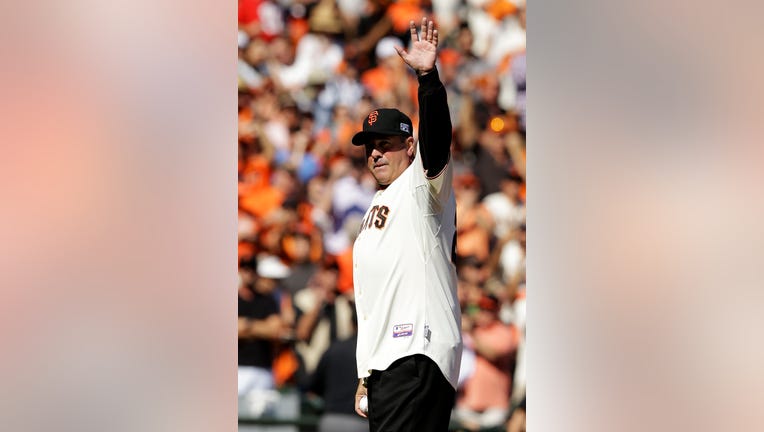 SAN FRANCISCO - Baseball demands patience. This virtuous skill is something San Francisco Giants legend Will Clark recognized the importance of long before he was known for his unfathomably smooth swing and unrelenting intensity.

On Saturday night, that patience paid off. In a packed Oracle Park, Clark was rewarded with the highest honor from the Giants. His no. 22 was officially retired, enshrined forever alongside fellow Giants legends like Barry Bonds and Willie Mays.

"This is my Hall of Fame," said Clark. "I could not have done that without a lot of people, teammates, fans, support personnel, the whole works, we did this together."

It’s a moment Clark said he’s waited a long time for, yet never expected. Like most of his baseball career he’s remained patient– a lesson he credits his dad with instilling in him.

"He made me use my intelligence and my hard work to be better than the other guy," said Clark.

Clark admitted that it is not an easy skill and has to be learned.

"For me personally though it was like second nature," said Clark.

He practiced patience throughout his high school and college career and said luckily, it carried over to his professional career.

"You have to be patient enough to get the pitch you want and hit it and that is a skill of having been there and done that."

Some may say the patience paid off for Clark early in his career. Many Giants fans will never forget Clark’s first major league at bat in 1986 when he hit a homer off of now hall of fame pitcher Nolan Ryan.

Clark spent years honing his patience at the plate, never knowing he would spend each day after 1998 having that skill tested in ways he hadn't fathomed.

In 1998 Clark and his wife, Lisa Clark, learned their 2-year-old son, Trey, was diagnosed with autism.

"I was actually on the road in Baltimore and I had to fly home to be with my family," said Clark. "There's a ton of questions after that, ‘why is this happening to us, what do we need to do moving forward’."

Clark said his most trying time personally came in the off season before he retired.

"We saw a lot of improvement in my son when I was home," said Clark. "That made me change my priority and said okay it's the end of my career, I need to take care of him."

Deciding to step away from the game he loves was a "piece of cake," said Clark. His patience was tested by some of the best pitchers to ever take the mound, but it needed to be tested in a different arena, one without TV cameras or screaming fans. His skill would no longer earn him play off appearances or post season awards, this reward would be much greater--watching his son grow.

Clark said when raising an autistic child you celebrate little victories. In Trey's case, Clark said he's most proud of how far his son has come socially and being able to hold conversations with new people.

24-years after his initial diagnosis, Trey is highly functioning, and like his dad, has a genuine love for the game of baseball-- it's one of the many things the duo bonds over.

Clark still thinks about the patience his dad taught him decades ago and all the places it has taken him.

"We talked about it all the time," said Clark. "I appreciate his knowledge."

Today, Clark is a spokesperson for Autism Speaks and Anova. Each season he and the Giants host Autism Awareness night to raise money for Autism non-profits.

"I want to celebrate the individuals that I meet at the ballpark, that I have a chance to hug and say hey look were going to be fine im going to celebrate you just like I celebrate my son," said Clark.