Alameda County District Attorney Nancy O'Malley and her staff have been engaging in illegal campaign practices by communicating about campaign issues using their government emails -- a violation of state law, lawyers hired by an opposition group said in a formal complaint this week.

OAKLAND, Calif. - Alameda County District Attorney Nancy O'Malley and her staff have been engaging in illegal campaign practices by communicating about campaign issues using their government emails -- which would be a violation of state law, lawyers hired by an opposition group said in a formal complaint this week.

Some of alleged violations include using county email accounts to solicit campaign contributions to pay for "hit pieces" against opposition candidate Pamela Price and to solicit volunteers to support O’Malley. The emails also appear to show members of her office were working with the police union-backed independent expenditure committee.

The Sutton Law Firm, hired by Price's camp, alleged in a complaint to the Fair Political Practices Commission that deputy district attorneys working on O'Malley's re-election campaign in 2018 wrote frequently about raising funds to pay for anti-Price ads. Specifically, the Sutton legal team said they found 35 campaign-related emails sent or received via government email in 2018 and 12 in 2021.

Other deputy district attorneys emailed thank you notes after the election to police officer associations and other contributors to the "Californians United for Safe Neighborhoods and Schools Opposing Pamela Price for District Attorney 2018," according to the complaint. This PAC was created by the San Jose Police Officers’ Association and the Los Angeles Police Protective League, with money from the LAPD officers’ association, the Oakland police union and the California Correctional Officers Association.

And the complaint also alleges that O'Malley's deputy prosecutors also monitored Price's political activities "during work hours," which "constitutes an in-kind contribution" and should have been reported by the O'Malley campaign committee and even the DA's office.

Coordinating campaign ads, fundraising and other activities using government letterhead, time and emails all on company time, violate state campaign laws. It is also illegal under the state government code for a candidate’s campaign to coordinate with an independent expenditure committee, which are not subject to fundraising limits.  Any violation of the Political Reform Act can result in a penalty of up to $5,000 per violation.

"No one is above the law, especially not the District Attorney. I am running for DA to clean up this type of corruption and prosecutorial misconduct," said Price, a civil right attorney. "It is about creating an office free of politics as usual and conflicts of personal interest. We must restore public trust and accountability to the DA’s office."

Through a spokeswoman, O'Malley's office on Wednesday declined to comment.

However, O'Malley has announced she won't seek re-election in 2022.

Price ran against O'Malley in 2018 and lost.

But Price is running again in 2022 her camp pointed out in its formal complaint that O'Malley's supporters will "very likely" spend time and money on "additional hit pieces" against her.

Also running for DA in 2022 are Terry Wiley, the No. 3 ranking prosecutor in the Alameda county District Attorney's Office, and Jimmie Wilson, a 16-year veteran of the Alameda County DA's Office.  Wiley's name appears on several of the government emails. He kept O’Malley informed of Price’s endorsements and urged colleagues to attend a candidate forum to show support for their boss, the emails show.

James Sutton, the attorney hired by the Price campaign, said his firm reviewed 230 pages of emails and the allegations "require the FPPC's immediate attention."

Sutton also said that Attorney General Rob Bonta should also begin an "immediate review" of how police unions are "coercing influence within the DA’s office."

No one from the FPPC would comment as they are likely the investigating agency. 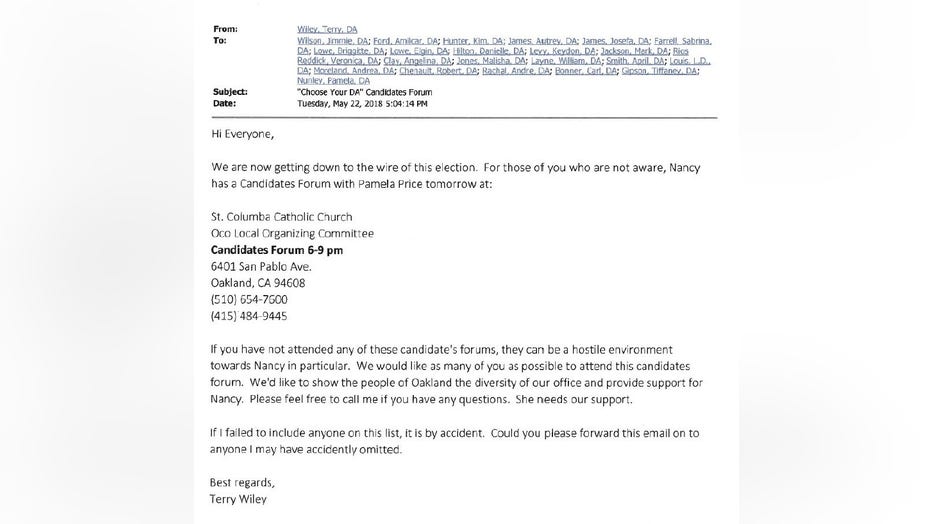 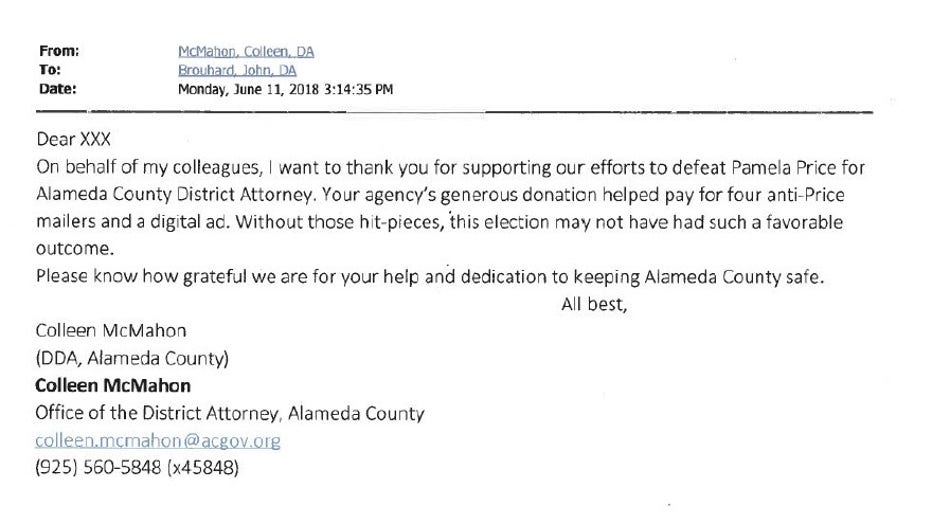 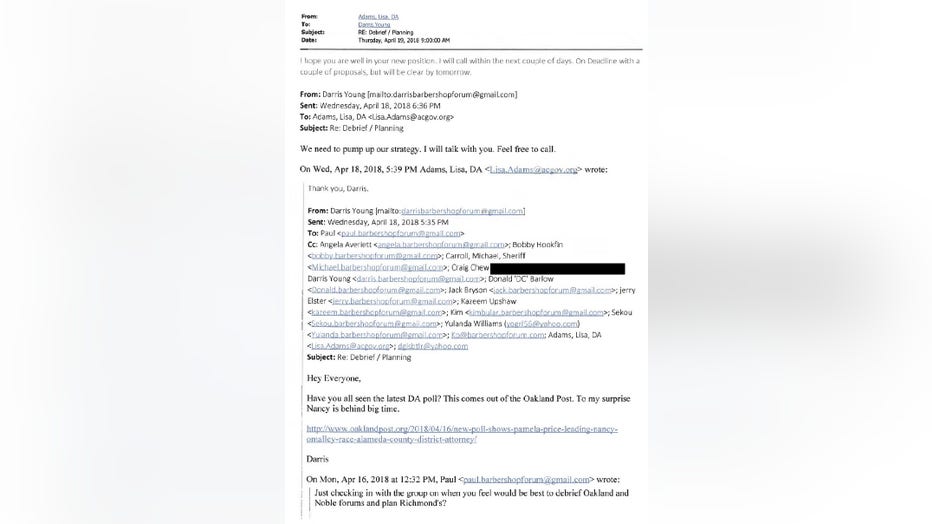