Pacific Gas & Electric will face trial for manslaughter over its role in a 2020 wildfire in Northern California that killed four people.

California is rushing to prepare for the next round of severe storms starting Sunday night. Given the potential for more flooding and landslides, officials throughout the state are warning about the dangers and how to prepare.

Tribal, state and federal officials applauded a demolition plan of four dams along the Klamath River, in what is the largest river restoration project in U.S. history.

November is historically one of California's worst months for deadly, wind driven mega wildfires. This year, there has been far less large runaway wildfires statewide, rainy conditions are to thank.

Rain may put a damper on some plans in the Bay Area this weekend, but it's good news for firefighters and the overall fire season outlook. 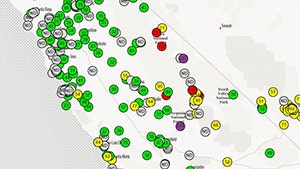