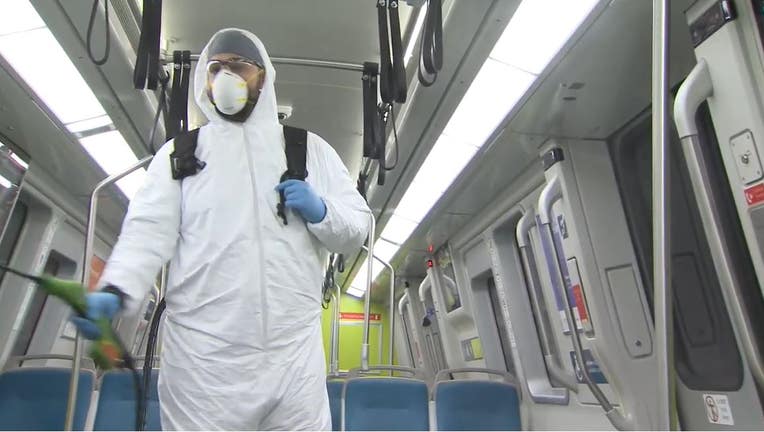 BART being disinfected by a worker. Snap shot of video on BART.gov.

Since March of last year, the agency stopped both weekday and weekend train service at 9 p.m. in an effort to cut costs in the face of a 90 percent drop in ridership during the pandemic.

BART further modified its schedule in June and September of 2020 to better suit its pandemic-era ridership, but agency officials said they expect to expand weekday and Saturday service back to midnight as soon as September of this year.

The full service restoration plan, BART officials told the agency's Board of Directors Thursday morning, would shorten the time between trains from 30 minutes to 15 minutes during non-peak hours until 8 p.m. and change Saturday service hours to 6 a.m. to midnight on all five of the agencies routes.

"It improves service at a time when many Bay Area residents and employers are looking forward to a post-pandemic life," Pamela Herhold, BART's assistant general manager for performance and budget, said of the new service plan.

"It provides more-frequent midday service and ... this invests in the regional economic recovery and a likely long-term growth plan for BART ridership," she said.

Agency officials presented two other service plans to the board, but both were less expansive than the plan that increased service frequency and added late-night train service.

Herhold and other BART officials also noted that increasing train frequency and adding late-night service would add roughly $42.6 million to the agency's budget for fiscal year 2022, which begins July 1.

The preliminary budget also includes a $31 million deficit, at least some of which will be partially offset by the agency's incentivized retirement program and federal stimulus funds.

Simi noted that the agency expects to save a net amount of $20 to $25 million in the next fiscal year from the early retirement program, which resulted in 287 BART employees - about 7 percent of the agency's workforce - accepting an early retirement package.

Board Director Rebecca Saltzman, speaking in favor of the proposed service changes, argued that BART needs to be ready to serve more riders post-pandemic rather than reacting after those riders are ready to utilize BART again.

BART Office of Civil Rights Director Maceo Wiggins argued that resuming late-night service is also a matter of equity, noting that pre-pandemic ridership between 9 p.m. and midnight was predominantly comprised of low-income and transit-dependent riders and people of color.

"We are a transit agency first," Board Director Janice Li said. "So we want to run great transit service."