A Southern California native has made history, becoming the first above-the-knee double amputee to finish the grueling IRONMAN World Championship in Hawaii earlier this month. 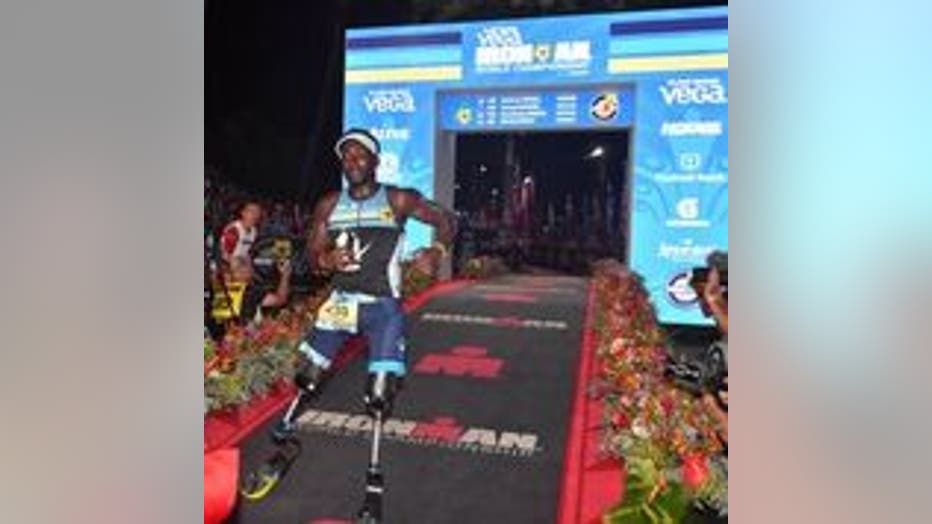 On October 12, 27-year-old Roderick Sewell competed in what's widely considered one of the most difficult sporting events in the world. He completed a 2.4-mile swim, biked 112 miles on a specialized handcycle and then finished off the race with a 26.2-mile marathon in his blade prosthetics.

Sounds challenging? The San Diego native, who now calls Brooklyn his home, is no stranger to challenges. Born with his tibia bones missing, doctors amputated both of his legs at the age of one.

Then as a child, he and his mother faced a period of homelessness. She didn't have the money to buy her son the proper prosthetics, so Marian Jackson, made some sacrifices.

"She had good insurance and was working for the government," Sewell told KTVU, but he added, "It wasn't enough to afford prosthetics." So she gave up her job and filed for unemployment, which helped get the coverage they needed to acquire the prosthetics. That led to a series of financial challenges that resulted in Sewell and his mother living in homeless shelters.

He and his mother later had to relocate to Alabama, where they had family and eventually got situated.

Looking back, Sewell said the hardships they faced during those years helped him take on other challenges in his life and not take anything for granted. "It definitely builds character. I definitely learned to appreciate the little things," the athlete explained. "It got my mindset prepared."

It was during that tumultuous period in his young life that a life-defining moment arrived for Sewell. He got involved with the Challenged Athletes Foundation (CAF), which is an organization that provides opportunities and support for athletes with physical challenges and seeks to empower them through sports and active lifestyles. "His life quickly changed for the better," according to his U.S Para-swimming bio.

Sewell now serves as an official ambassador for CAF, which has supported him since he was 8 years old, through multiple grants for adaptive sports equipment, training and competition expenses, according to the organization.

Through CAF, at a young age, Sewell participated in a variety of sports, including running and basketball. But as a child, there was one activity he wanted no part of. He was deeply terrified of swimming.

It wasn't until he was about 10 years old, when everything changed. He watched on as a friend, who was also a double amputee, swam. Seeing someone similar to him, doing something he thought he couldn't do, melted his fears away, and inspired him to get in the water. In fact, he didn't just learn the sport, but he rose to the top as a competite swimmer.

Twelve years later, Sewell made his debut with the U.S. Para-swimming team at the 2014 Pan Pacific Para-swimming Championships, where he won both a gold and bronze medal.

And 17 years later, he would say the swimming portion of the IRONMAN World Championship would be the easiest for him. He knew it was where he would be the strongest in the punishing triathlon. "Swimming was my better of the three disciplines," Sewell said. "I had the endurance in swimming." 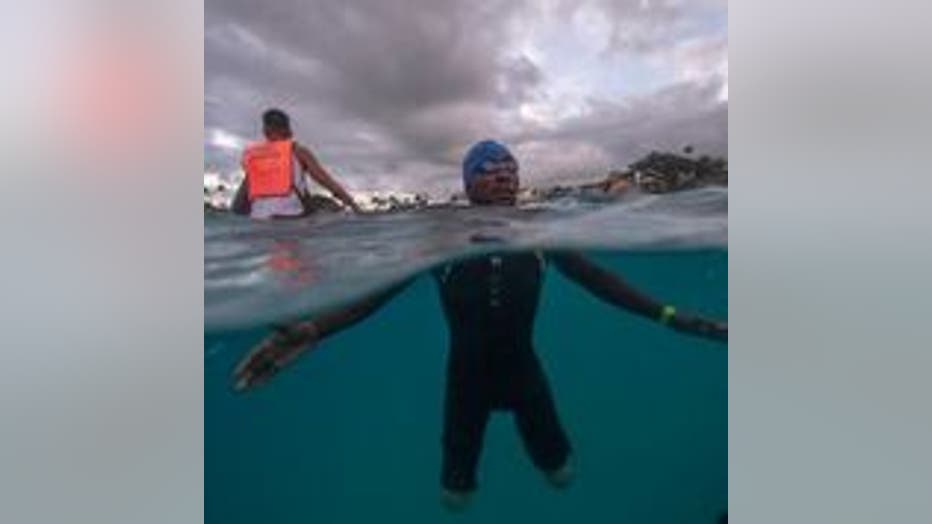 And that endurance did not let him down for the Ironman challenge. He completed the 2.4 miles in the water with a stunning one hour, nine minute time.

He then proceeded to tackle the 112 miles of biking amid strong cross-wind, with a kneeler handcycle. Sewell and his coach were concerned about that segment of the race because of the pressure the biking would put on his back, so they practiced longer rides on the weekends, leading up to the Ironman.

"And it paid off on the bike," Sewell said, noting he completed it in eight hours and 51 minutes. 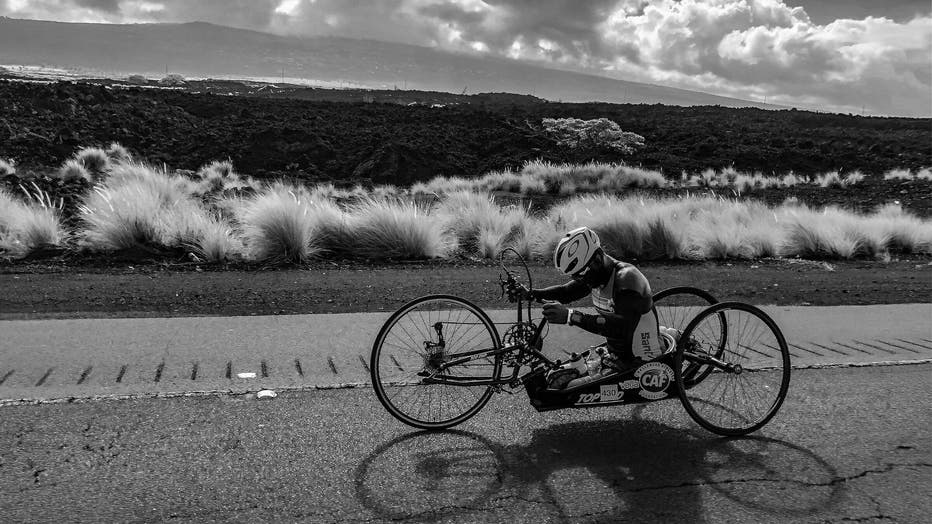 Then came the 26.2 miles on his prosthetic running legs, which happened to be his first ever marathon. He admitted he started off a little too fast with a nine minute mile. He ended up walking some segments of the race, but he never gave up, and his finish was strong. 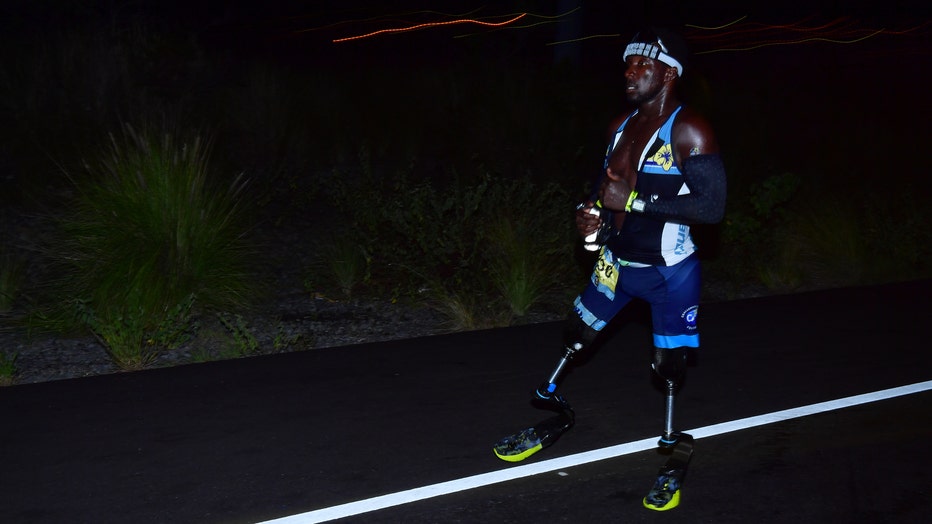 KAILUA-KONA, HI - OCTOBER 12: during the 2019 Vega IRONMAN World Championships on October 12, 2019 at Kailua-Kona , Hawaii. (Photo by Donald Miralle for CAF)

"The run was at its hardest between mile 20 to 24," he said. "My stomach was doing flips, and I was reduced to the Ironman shuffle. The last two miles I made myself run, and from there I had the finish line in my sights.”

And looking back, he joked, "It's funny, you think it's just a very long day."

Ultimately he reached the goal he set out to accomplish -- to complete the entire IRONMAN World Championship. It took him 16:26:59 and placed him in the record-books.

Pretty incredible, when you consider he didn't technically train for the event. "I got the confirmation eight weeks prior," Sewell said, though he noted, as an athlete, the last 12 years of his life has been one big training session.

"It was more of a test of endurance than anything. My goal was just to finish, and once I got the word that I was for sure going, I was committed. Took it very seriously," Sewell explained. "The Ironman itself was never an option. Never considered. Once I was given that chance, I wanted to take it up."

The way he tackled the world class triathlon is how he's approached life. "I've never shied way from the worst," he said, noting that in the sports world, it's universally acknowledged that the Ironman event in Kona, is unlike any other in its intensity and physical demands.

At the end of the race, the pay off was incomparable to any other experience. At the finish line was his proud mother in tears, as she embraced her son, ready to celebrate his incredible accomplishment, one that he purposely didn't share the details about with her, so she wouldn't worry.

"She was a little nervous. It's for the best I didn't tell her," Sewell said. But in the end, his mother was just  blown away. "It was a long day. As the day was going on, she was realizing her son had grown up," he said. 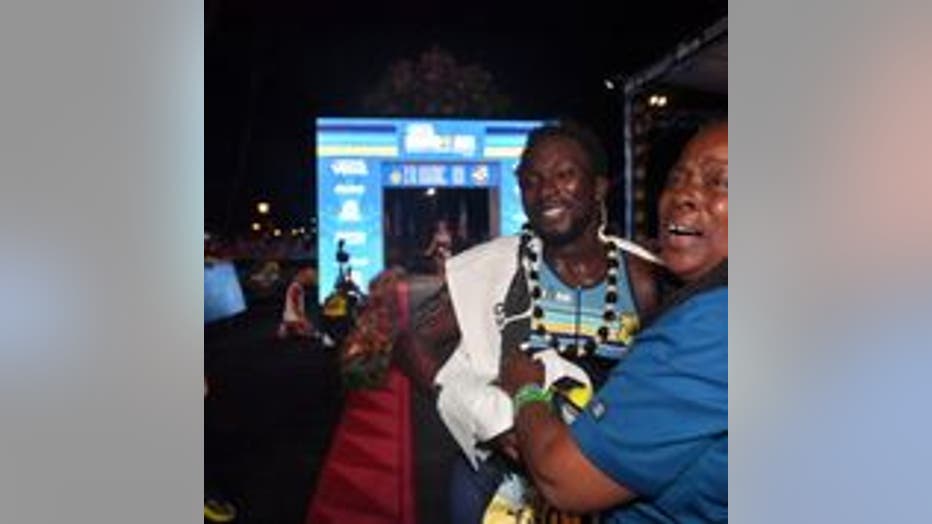 Some two weeks after the race, Sewell said he's still a bit drained and still trying to wrap his head around what he accomplished. "Looking back at the photos, I still can't believe I did it. I knew I had what it took to finish this race but it still feels so unreal," he said.

Ironman has selected Sewell to be an Ambassador Athlete for "his characteristics that go well beyond competition."

The competition's founder, John Collins, completed the first ever IRONMAN challenge in 1978 and has used the motto "Anything is Possible" as a trademark guide.

It's an attitude this history-making athlete seems to embody and embrace.

"This is a reminder for everyone, the same way it was for me," Sewell said, adding that there was a point in his life, when walking wasn't even an option. "Now I'm doing the Ironman. It's your life. You can make it what you want, or you can let people set limitations on you." 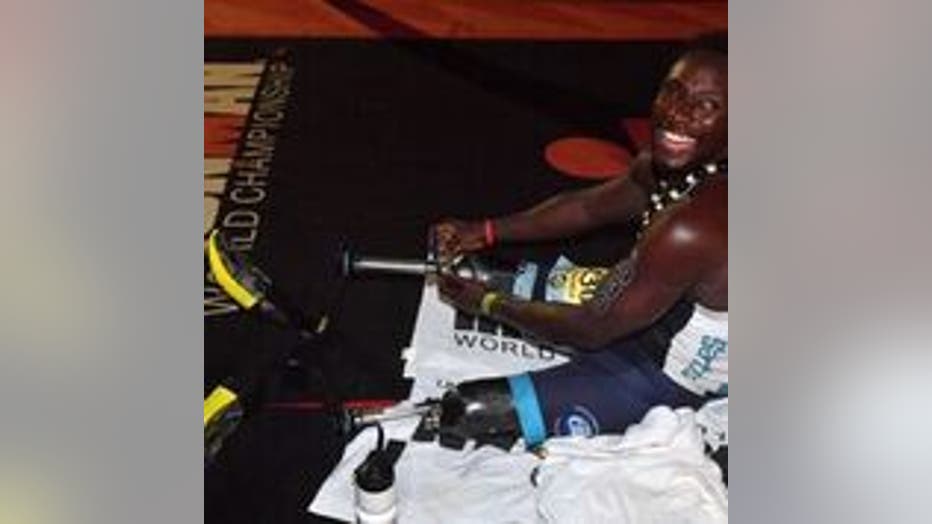