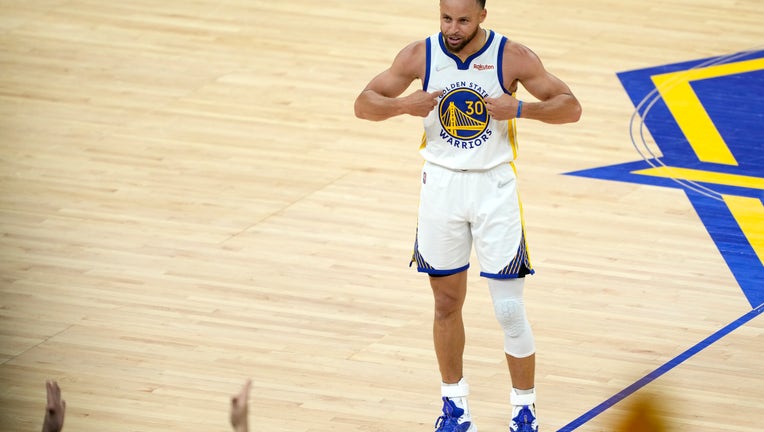 SAN FRANCISCO, CALIFORNIA - MAY 20: Stephen Curry #30 of the Golden State Warriors reacts after a play during the fourth quarter against the Dallas Mavericks in Game Two of the 2022 NBA Playoffs Western Conference Finals at Chase Center on May 20, 20

SAN FRANCISCO - Stephen Curry scored 32 points with six 3-pointers and eight rebounds, Kevon Looney had a career-high 21 points and 12 rebounds, and the Golden State Warriors used one of their signature third-quarter flurries to rally past the Dallas Mavericks 126-117 on Friday night for a 2-0 lead in the Western Conference finals.

Luka Doncic and the Mavericks led most of the way before the Warriors took their first lead of the night on Otto Porter Jr.'s 3-pointer 18 seconds into the fourth. Porter's three-point play with 7:21 remaining made it 100-92.

The Warriors made a comeback in Game 2 of the Western Conference finals Friday night at the Chase Center. KTVU's Jana Katsuyama was at Thrive City to give us a glimpse of the excitement.

He even got a Twitter shoutout from Oakland's own MC Hammer: "Ok young Luka . We see you."

Andrew Wiggins' 3-pointer with 49 seconds left in the third got Golden State back within 83-81 only for Doncic to answer on a layup moments later. But a 25-13 quarter for the Warriors pulled them to 85-83 going into fourth -- a third quarter reminiscent of those that defined so many of their recent playoff runs.

The series shifts to Dallas for Game 3 on Sunday. Golden State is two wins from a return to the NBA Finals for the first time since making five straight trips from 2015-19.
------
NBA: https://apnews.com/hub/nba and https://twitter.com/AP--Sports