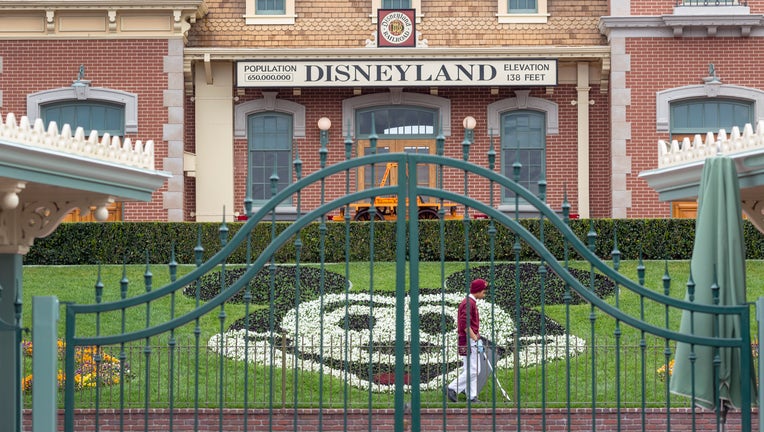 An employee cleans the grounds behind the closed gates of Disneyland Park on the first day of the closure of Disneyland and Disney California Adventure theme parks as fear of the spread of coronavirus continue, in Anaheim, California, on March 14, 20

"The State of California has indicated that it will not issue theme park reopening guidelines until some time after July 4," the company said in a statement.

Reopening would entail bringing thousands of cast members back to work. "We have no choice but to delay the reopening of our theme parks and resort hotels until we receive approval from government officials," they said.

The Southern California resort located in Anaheim, in Orange County has been closed since March 14 just before shelter-in-place orders began.

The Downtown Disney District will reopen July 9 as previously announced. However, they have no new date set for reopening until clear guidelines are released from the government.

Gov. Gavin Newsom “appreciates Disney’s responsiveness to his concerns about reopening amid the recent increases in COVID-19 infections across many Southern California counties," Newsom spokesman Nathan Click said. “The governor, the state and our public health experts continue to be in contact with the company and their workers — as well as other theme parks in the state — as we track and combat the spread of the virus."

The delayed reopening also comes amid concerns over public health from employee unions. Disney said they are still negotiating with unions in order to get employees back to work.

"We have had positive discussions and are very pleased to have signed agreements from 20 union affiliates, including the Master Services Council, which represents more than 11,000 of our cast members," the Disney statement said. The agreement includes enhanced safety protocols for employees.