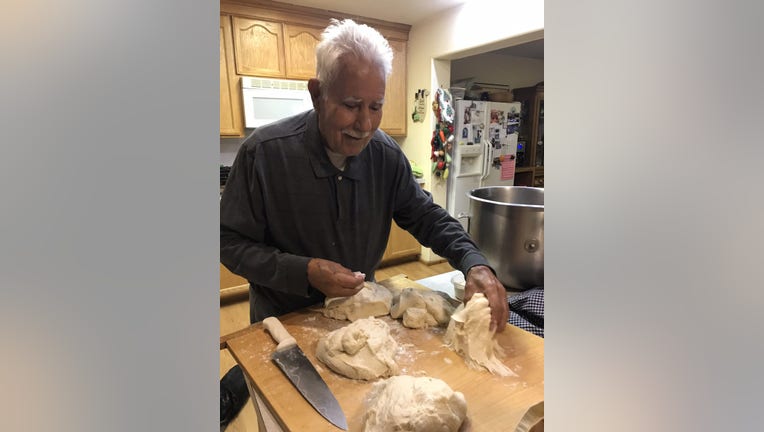 SAN LORENZO, Calif. - To many, he was affectionately known as "the Pie Guy." East Bay baker Francisco "Pancho" Aranda died last month at the age of 93, after enjoying a lifetime of whipping up countless pies and other delectable baked goods, a joy and passion he continued to share with those around him even after his life as a professional baker ended with his retirement.

He was a quiet man of few words, according to his family, and one way of expressing himself was through his baking.

Aranda arrived to the U.S. as a young teen from Mexico and settled in the Oakland area. He worked hard to make a living and took on any work he could find.

"Then eventually he got a job in a bakery," daughter Esther Vigil shared with KTVU, adding, "and after work he would stay and learn just because he wanted to advance himself."

He later got married and began a family, and he used baking as his primary skill to support his ever-growing family. "He had to afford seven kids. So he always worked two jobs," the daughter recalled, noting that at one point he and a business partner even opened up a bakery of their own.

He took pride in his craft, one he cultivated to perfection during his roughly 35 years as a baker at Svenhard's Swedish Bakery in Oakland on Adeline St. He eventually decided to retire from that job, so could stay home to help his wife who was battling cancer at the time.

And because he wasn’t going into work, his family helped him continue his love for baking by converting his indoor patio into a bakery.

"He had a full-blown [bakery]," Vigil said, "two mixers, a double oven, a rack, freezer, refrigerator, so he was able to do his baking in there. That way it wasn’t so inconvenient for him."

During the holidays, he put that work area to use. It would become like Santa’s baking workshop. KTVU featured the "Pie Guy" in 2017, in a story about the then-89-year-old who baked dozens of pies for family and friends.

And while Aranda was known for his exquisite pies, from pumpkin, to apple, peach and even made mince, his repertoire of baked goods offered a varied selection, which was shared widely.

"Every year he had to make a ton of stuff. Even when he had to make cookies and breads or whatever, he would give them to the neighbor and whoever was there. You know, ‘Hey, you have to take some,’" Vigil recalled her father saying to those around him.

Come Thanksgiving and Christmastime, he would make 30 to 40 pies for neighbors, friends, for parties, and even for the nurses and doctors he would see during doctors’ visits.

This past holiday season, even through his health was failing, he would not let up on his tradition of giving away his pies. With lots of help from his daughter, he was able to distribute his signature pies one last time. "They weren’t nearly as pretty as my dad’s," the daughter said, "but they turned out."

Vigil said her father was quite weak and was worried about not having the energy to make his pies, so she stepped up. "… since 2017 he had been teaching me how he does it so I was prepared," the daughter shared.

She said that she ended up doing much of the heavy lifting but had her father there for quality control to ensure everything was up to his standards.

"He became weaker and weaker. And it would be so where, ‘No dad, don't worry, you just stay here. You tell me what to do,’" the daughter explained, calling him her mentor who guided her along the way. She carried out the delicate operation of rolling the crust and then after she whipped up the pie filling, she would take a sample to her father. "I would go in and have him taste it. And [ask], ‘Hey dad, what does it need?’"

Vigil said by Christmas, his deteriorating health allowed him to roll only one pie crust, but it brought her joy to see that even then, he was able to partake in the activity he enjoyed so much in life, so she documented the moment in video.

East Bay baker Francisco "Pancho" Aranda, died on Jan. 28, 2022 at the age of 93. He loved to give away dozens of pies during the holiday season. Last December, his daughter Esther Vigil said that even as his health deteriorated, she watched on as he rolled a pie crust as part of his holiday tradition to give away his pies.

During his final days, it was his baking he dreamt about. The daughter said she and her siblings took turns watching over him, and on one of his fitful nights of sleep when she was on duty, she sat by him and heard him dreaming about making éclairs.

"He said in Spanish," she recalled, "‘I’ll let you fill the éclairs.’ Then a few moments later said, "‘I think we only have a little, we should make more.’ My dad didn’t know how to make a little," the daughter joked. "I was just honored to be there and share that moment," she said.

He died on Jan. 28 from congestive heart failure.

Vigil said in honor of her father, she planned to continue this tradition he loved so much, spreading joy through baking, something her siblings encouraged her to do. "That’s what all my brothers and sisters are saying, you know, ‘Hey, you’ve got the task now."

That task will be one she’ll perform this week, without her father there to check her work, as Aranda’s family will remember the man who shared so much of his passion with so many. Memorial services will be held at Holy Sepulchre Cemetery & Funeral Center in Hayward.

A vigil was scheduled on Wednesday, and family and friends planned to gather for a mass, burial and celebration of life on Thursday. And as it was so during so many moments in Aranda's life, his presence and love will be represented through his baked goods.

"I’m baking peanut butter cookies of his recipes to bring at his celebration of life," his daughter shared, adding, "They won’t taste nearly as good as he made them though."

His presence and legacy will also be felt through the large, loving family he left behind. He was a father, a brother and husband, married almost 70 years. He was grandfather to 11. He also had 16 great-grandchildren and four great, great-grandchildren.

Vigil said in addition to his remarkable skills as a baker, her father will be remembered for his devotion to his family and as a quiet and reserved man who never asked for anything but worked hard and was always full of love.

"He just did what he had to do, and he definitely left an impact," the daughter said. "He touched so many people." 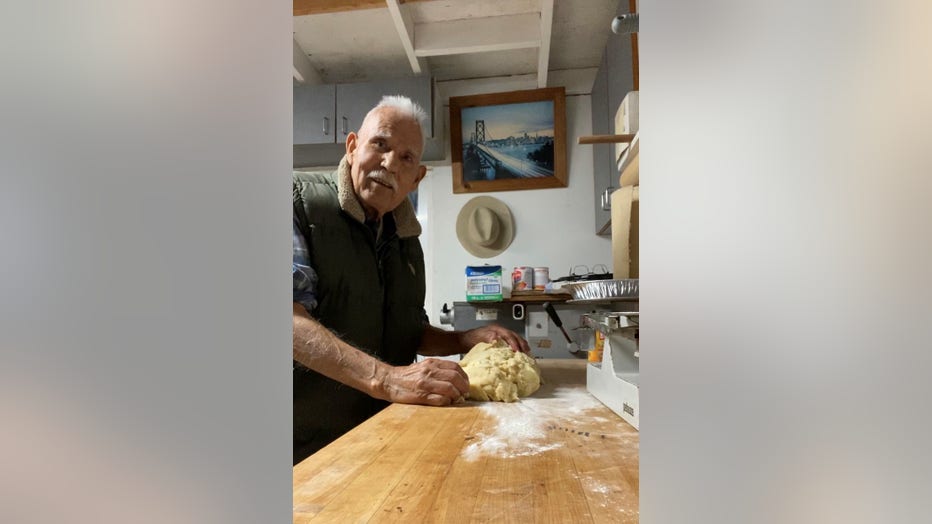 Francisco "Pancho" Aranda known to many as the "Pie Guy" would give dozens of pies away during the holidays. The San Lorenzo resident died on Jan. 28, 2022 at age 93. Memorial services will be held on Feb. 23 and 24, 2022 at Holy Sepulchre Cemetery & (Esther Vigil) 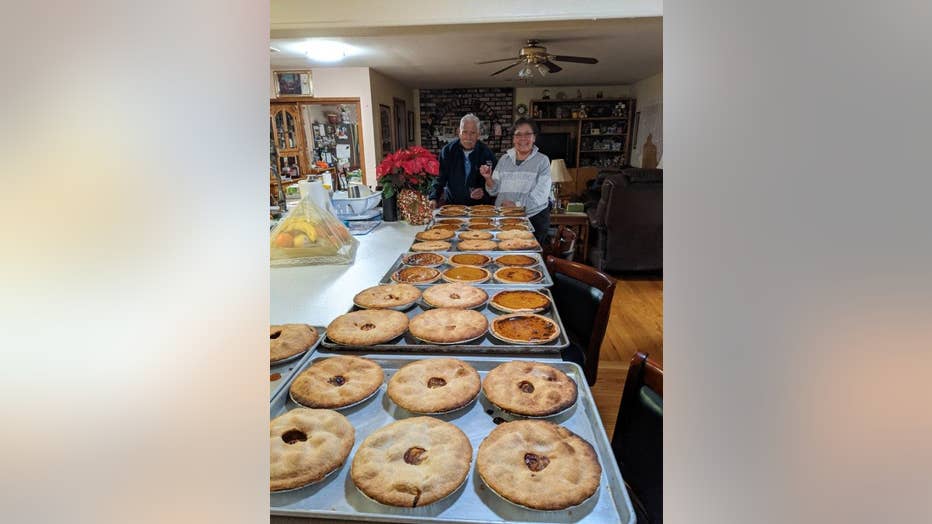 Esther Vigil with her late father, baker Francisco "Pancho" Aranda. Known as the "Pie Guy," Aranda would give away dozens of pies to friends and family during the holidays. He died on Jan. 28. 2-22 at age 93. (Esther Vigil) 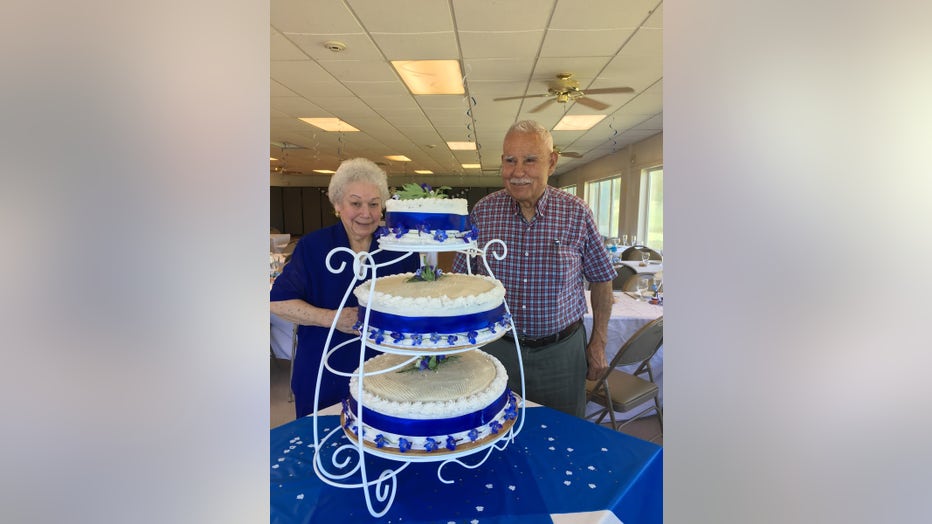 Baker Francisco "Pancho" Aranda who loved to give away pies during the holidays died on Jan. 28, 2022 at age 93. Memorial services will be held for the longtime San Lorenzo, Calif. resident on Feb. 23 and 24, 2022 Holy Sepulchre Cemetery & Funera (Esther Vigil) 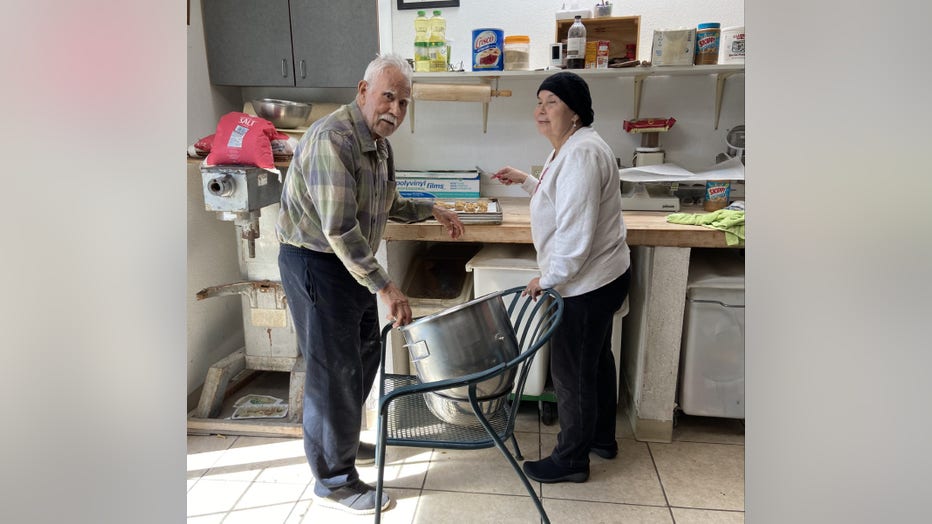 Francisco "Pancho" Aranda doing what he loved best. The retired baker was known for giving away dozens of pies during the holidays. He died on Jan. 28, 2022. (Esther Vigil)