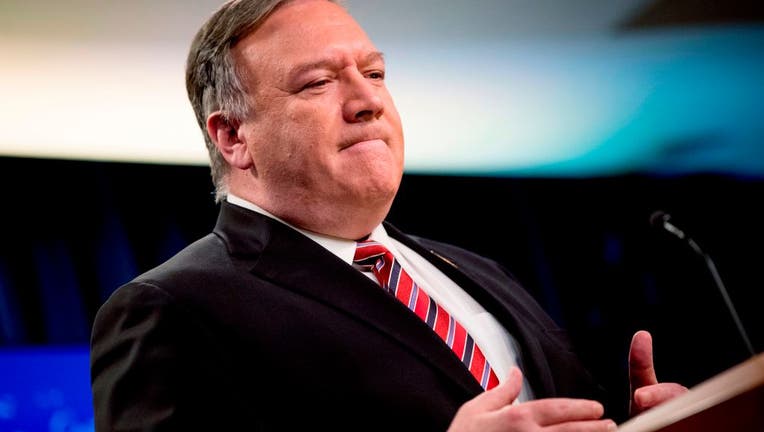 US Secretary of State Mike Pompeo pauses while speaking at a news conference at the State Department on April 29, 2020, in Washington,DC. (ANDREW HARNIK/POOL/AFP via Getty Images)

WASHINGTON - The House Foreign Affairs Committee has subpoenaed Secretary of State Mike Pompeo for documents he turned over to a Senate panel that is investigating Hunter Biden, the son of Democratic presidential candidate Joe Biden.

Committee Chairman Eliot Engel said Friday he had issued the subpoena as part an investigation into Pompeo's “apparent use of Department of State resources to advance a political smear of former Vice President Joe Biden.”

The subpoena demands all of the records that the department has turned over to Republican-led Senate committees that are investigating Hunter Biden's work for a gas company in Ukraine while his father was vice president. It also asks for internal department emails about responding to Congress. The committee says Pompeo had delivered more than 16,000 pages of records to the Senate but refused to send the same materials to the Democrat-led House.

“Secretary Pompeo has turned the State Department into an arm of the Trump campaign and he’s not even trying to disguise it," Engel said in a statement announcing the suboena, which demands the materials by next week.

The subpoena represents another escalation in an election-year battle between Democrats and the GOP Senate committees investigating Hunter Biden. Democrats have criticized Senate Homeland Security and Governmental Affairs Committee Chairman Ron Johnson, R-Wisc., in particular for his probe of Hunter Biden and the gas company, Burisma. They say Johnson's probe is amplifying Russian propaganda, a charge he denies.

There is no evidence of wrongdoing by the Bidens, and Hunter Biden has denied using his influence with his father to aid Burisma.

House and Senate Democratic leaders sent a letter to FBI Director Christopher Wray last month, saying they are concerned that Congress appears to be the target of a “concerted foreign interference campaign” to influence the 2020 presidential election. The letter, which did not mention Johnson or his committee by name, asked Wray for an all-members, classified briefing on the matter before the August recess.

Wray hasn't yet offered the requested briefing, but lawmakers did receive a classified briefing early Friday on general election security. Leaving that meeting, House Speaker Nancy Pelosi said she is concerned “the American people should be better informed.”

The president’s efforts to have Ukraine investigate Hunter Biden’s role as a board member for Burisma were at the heart of House Democrats’ impeachment probe last year. Trump asked Ukrainian President Volodymyr Zelenskiy to investigate the Bidens on a July 2019 phone call that was later revealed by a whistleblower’s complaint.

The House impeached Trump in December for pressuring the Ukrainian government to announce an investigation while withholding military aid to the country. The Senate acquitted him in February.

The new efforts by Democrats come as the nation’s intelligence agencies, congressional intelligence committees and Joe Biden have all warned of renewed election interference by Russia this year. Trump himself has been loath to discuss the subject or acknowledge that Russia tried to sow discord in the 2016 contest by hacking Democratic accounts and pushing out inflammatory content on social media.

Still, his administration has warned that Russia and other countries will likely try again. In a statement last week, William Evanina, the government’s chief counterintelligence official, said adversaries such as China, Russia and Iran are seeking to compromise U.S. private communications and infrastructure in campaigns. It also warned of disinformation campaigns on social media.

Democrats said the statement didn't go far enough, and have pushed for more information on the meddling to be public. They have also sought to bring attention to their apparent concerns about the Senate investigations while declining to talk in specifics because much of the information is classified.

On Thursday, the House Intelligence Committee voted to make a classified attachment to the letter detailing their concerns about interference available for review by members of the House. In a transcript the committee released of that closed meeting, House Intelligence Committee Chairman Adam Schiff said he has “the same concerns today” as he did in 2016 that Russians were working to disrupt American elections.

“I believe today, as I did then, that any effort to interfere in elections must be deterred, disrupted, and exposed, because complacency will further erode the basic precept underlying our democracy, that Americans alone must decide American elections,” Schiff said.

At the same meeting, Democrats asked the panel's top Republican, California Rep. Devin Nunes, whether he had received a package of information from Ukrainian lawmaker Andrii Derkach and whether he would share it with Democrats. Derkach is a member of Ukraine’s parliament who has promoted unsubstantiated claims against the Bidens.

Rep. Sean Patrick Maloney, D-N.Y., said “committee staff is in possession of evidence that a package was received."

Asked by Schiff if he would respond to Maloney's question, Nunes said “no.”

Nunes said the Democrats' letter on election interference was a political exercise.

He said the classified attachment “focuses entirely on Russia while ignoring potential election meddling by any other nations.”