For those willing to take the uneven ride, "The Godfather" meets "Hustlers" meets "The Devil Wears Prada" turns out to be a pretty fun pitch for an awards-season contender.

CHICAGO - The opening act of "House of Gucci" is something divine: A dark romantic comedy starring Lady Gaga as a social climbing sexpot and Adam Driver as the world’s dweebiest fashion empire heir.

Specifically, he’s Maurizio Gucci of the iconic Italian luxury fashion house that shares his name. And after meeting cute with glamorous Patrizia Reggiani (Gaga) at a party in Milan in 1978, the duo enjoy a whirlwind courtship largely of her making.

While Maurizio sees the vivacious yet down-to-earth Patrizia as a way out of the trials and tribulations of his family drama, she sees him as a way into a world of luxury, privilege and glamour. What unfolds between them is a funny, sweet, ominous, eventually murderous love story that raises fascinating questions about ambition, power and influence.

It’s like Shakespeare by way of the soapiest soap opera.

RELATED: ‘The Last Duel’ review: A grim medieval epic with the bite of ‘Mean Girls’

Unfortunately, that relationship dramedy is just one of the many stories that director Ridley Scott tries to tell in his sprawling "House of Gucci." The film as a whole is shaggy and bloated, with too many narrative detours and few supporting players who can match the blend of camp and humanity that Driver and especially Gaga bring to their smartly honed, wildly entertaining performances.

Still, the duo’s phenomenal chemistry carries this crime drama far. And for those willing to take the uneven ride, "The Godfather" meets "Hustlers" meets "The Devil Wears Prada" turns out to be a pretty fun pitch for an awards-season contender.

About "House of Gucci": The rise and fall of a fashionable family

When it’s not zeroing in on Maurizio and Patrizia’s marriage, "House of Gucci" broadens out to a "Succession"-style story about the messy infighting of the Gucci family in the 1980s.

As the film opens, it’s been 57 years since Guccio Gucci first started the luxury leather goods store that would eventually grow into the renowned Gucci brand. The company is now in the hands of his two aging sons Rodolfo (Jeremy Irons) and Aldo (Al Pacino), neither of whom are thrilled by the next generation they’ve produced.

The snobbish Rodolfo cuts off Maurizio after he decides to marry Patrizia, who Rodolfo worries is just a middle-class hustler looking for a cash grab. Aldo’s son Paolo (Jared Leto), meanwhile, is the black sheep of the family; an eccentric would-be fashion designer whose clothes are just as uncouth as his social skills.

WATCH: "Lady Gaga: One Sequin at a Time"

Unrecognizable in a fat suit and bald cap, Leto is the film’s biggest weak spot. Unlike Gaga and Driver, who excel at crafting characters who can play on the level of camp but are still recognizably human underneath, Leto’s copious prosthetics reflect the plasticity of his performance. It’s all surface level ticks and put-on grotesquerie. Even his over-the-top "It's-a-me, Mario!" voice robs the film of some of the meta fun it was having with everyone’s wildly divergent accent work.

You can feel Leto desperately trying to make his performance a camp classic, which is exactly what stops it from being one. Gaga, in contrast, fully invests in the realities of Patrizia’s sky-high ambitions and petty jealousies, which allows her to create a character who’s as dramatically captivating as she is deliciously hammy. 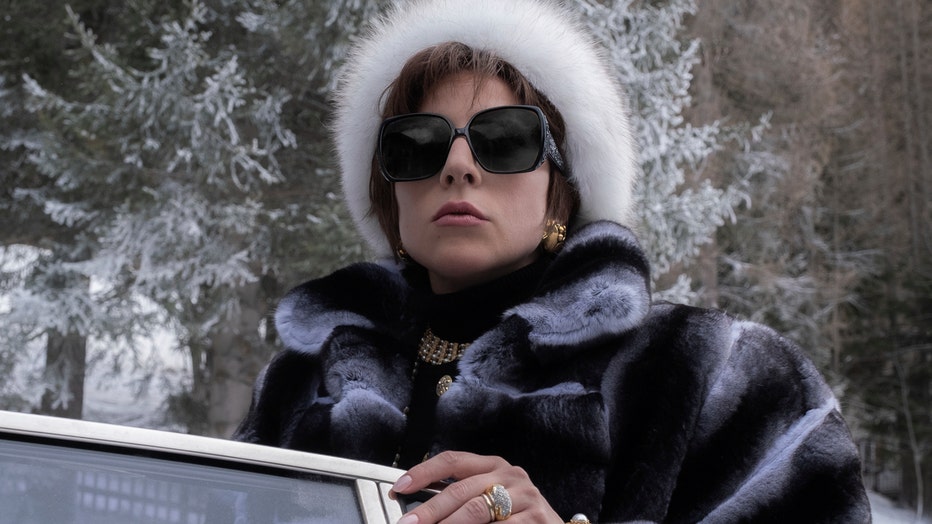 There are structural issues here too. In trying to cover 17 tumultuous years from both a personal and professional perspective, Scott struggles to find an emotional throughline for his unwieldy story about the Gucci family’s downfall. Instead he relies on opulence and self-awareness to keep things clipping along, which they mostly do thanks to Janty Yates’ spectacular costume design and a soundtrack that ranges from classical opera to Donna Summer and George Michael.

What "House of Gucci" lacks in consistent character arcs, it mostly makes up for in darkly comic fun—as well as some interesting, if underdeveloped, ideas about how a fashion brand evolves without losing its identity in the process.

Like Coco Chanel’s famous line about taking off one accessory before you leave the house, "House of Gucci" could’ve used some streamlining. Still, for a film that runs a whopping 2 hours and 37 minutes, it’s impressively breezy and deliciously watchable.

At the heart of "House of Gucci" is a Greek tragedy draped in couture: In trying to climb her way to success by encouraging her husband to embrace his ruthless side, Patrizia wound up writing her own downfall—and, even more violently, his. It’s an arc that Gaga is fully committed to, even when the script lets her down.

If "House of Gucci" is a fashion collection that never quite coheres, at least she provides a standout showpiece.

The Gospel According to André (2018): "You can be aristocratic without having been born into an aristocratic family," legendary "Vogue" magazine editor André Leon Talley explains in this documentary about his influential life and career. So take an electric cinematic ride with this haute couture tastemaker. Rated PG-13. 93 minutes. Dir Kate Novack. Featuring: André Leon Talley, Anna Wintour, Whoopi Goldberg, Tom Ford.

Karl Lagerfeld, The Kaiser of Fashion (2020): Learn all about the tumultuous life and career of one of the world’s most iconic fashion designers, and then see if you can spot him in "House of Gucci," where he’s played by Italian actor Antonello Annunziata. Rated PG-13. 45 minutes. Dir: Miguel Somoza. Featuring: Karl Lagerfeld.

Diana Vreeland: The Eye has to Travel (2012): The influential fashion editor of "Harpers Bazaar" and "Vogue" takes center stage in this documentary made by her granddaughter-in-law. Rated G. 85 minutes. Dir: Lisa Immordino Vreeland. Featuring: Diana Vreeland.