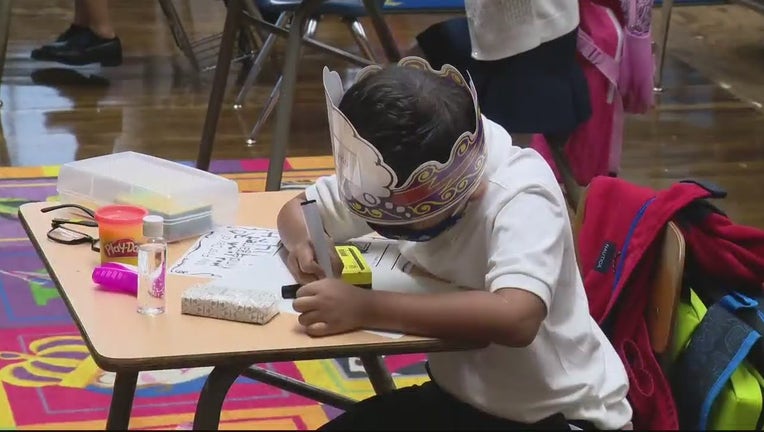 OAKLAND, Calif. - Many parents weren't alone in their displeasure with how school campuses reopened this spring across California.

So were most teachers, according to a new survey.

Those who taught in variations of a hybrid schedule, in which students divided their time between in-person instruction at school and distance learning at home, were the most frustrated.

They characterized their experiences as "exhausting", "stressful," even "discombobulating."

Said a middle school teacher with 94% low-income students in the Inland Empire, "The task of simultaneously teaching students in-person and online has been extremely difficult. I have never felt this stressed or worn out while teaching."

The responses are in the latest installment of a survey by the California nonprofit Inverness Institute and education consultant Daniel Humphrey. EdSource is partnering to present the findings.

During the first three weeks of May, 136 teachers were asked to rate and discuss their experiences on returning to school this spring and the implications for the fall.

The "California Teacher Consultant Response Network" participants were chosen from a pool of veteran classroom teachers who have participated in school improvement networks and education leadership programs.

They broadly represent the diversity of the state's teaching force by ethnicity, gender, grade level, and geography. Most have more than 10 years of classroom experience.

Of the teachers, 96% said they had been vaccinated for Covid, with 80% saying that immunization had eased their worries about in-person instruction.

"The moment the second vaccine went into my arm I felt a sudden excitement about returning to school that I had not felt before!" said a Central Coast teacher in a middle school with 79% low-income students.

The researchers have not identified the teachers' names and their schools to encourage candor. In turn, the teachers were frank -- about the decision-making process to reopen schools and about the challenges they and their students have faced.

"Simultaneous instruction is really difficult. Distance learning is really difficult," said a teacher in a high school with 90% low-income students in the Central Valley. "The creative capital I have spent trying to create an engaging and academically rigorous experience has really depleted me as a professional educator."

Although the state has reported that more than 90% of public schools have offered students the option to return to school for the remainder of the year, an EdSource analysis in found in early May that 55% of students overall and two-thirds of low-income students chose to remain in distance learning.

That split has resulted in a complex mix of options.

In some districts, teachers taught students in person and remotely simultaneously.

In others, they taught in-person in the morning, distance learning in the afternoon, or on alternate days, or alternate weeks. In some elementary schools, most kids showed up; in middle and high schools, a handful.

Worry about catching Covid was not families' only concern.

Teachers pointed to a lack of transportation, with no busing, parent work schedules, and a lack of child care.

In an Inland Empire high school with 1,700 students, only 230 opted to return for 90 minutes each day on Mondays and Tuesdays or Thursdays and Fridays.

In many middle and high schools, students were disappointed to find that in-person learning was no different from distance learning.

Instead of switching classrooms every period and interacting with students, they were locked into the same desk, socially distanced, with instruction via computer.

"Only about a third have chosen to come back as it is still Zoom in the room," said a Bay Area high school teacher in a school with 22% low-income students.

Four out of 5 teachers agreed that hybrid arrangements were more difficult than solely distance learning had been -- and were ineffective.

"I feel like I end up neglecting my students online to help the students in the class. I spent all year developing relationships through private chats and individual conferences on Zoom -- all of that is gone now," said a Bay Area teacher in an elementary school with 67% low-income students.

"Two-thirds of my students are in person and the other third are at home. It is difficult to meet their needs all at once and I always feel like I am ignoring one group over another," said a Central Coast teacher in a middle school with 39% low-income students.

Regardless of the mode of instruction, some teachers said they continued to worry about the mental health of their students and about the inequitable effects of the pandemic on families.

"The greatest challenge is trying to address the worsening mental state of my students. We have had at least two families become homeless, an attempted suicide, an ugly divorce, and multiple kids sliding into depression," said a Bay Area teacher in a high school with 79% low-income students. "For some, school has been a lifeline, but for others it is a burden."

"Kids with families with means and expectations are getting far more out of virtual or in person instruction," said a San Diego area teacher in a school with 93% low-income schools. "Parents' expectations matter. Study habits matter. Socioeconomic status and stable home environments matter. These cause gaps. If this is not a conclusion drawn from the pandemic it will be a detriment I believe to our educational system."

Despite the stress and the difficulties, some teachers, particularly in elementary schools, saw moments of joy and their students' spirits lift in the return to school.

"The 13 students that are in-person are thrilled and excited to be back despite the fact that they have no recess or any sort of interaction with other students. The first day of school I was told, 'This is how you really look?' ... They were mesmerized with the fact that I was physically in front of them. It was truly touching!" said a Los Angeles area teacher in an elementary school with 90% low-income students.

"I don't think we could call what is happening now 'normal,'" said a Central Coast teacher in a middle school with 79% low-income students. "And yet, there is a sense of joyfulness that I believe teachers and students are experiencing when on campus even with masks on and physically distanced."

Hybrid instruction, which many teachers called "unsustainable," will cease in all probability by the end of summer.

Gov. Gavin Newsom and the Legislature are set to order a return to pre-pandemic conditions in school, and the California Department of Public Health will withdraw the social distancing requirements that prevented a full classroom of students.

What may linger, Inverness researchers said, is a "damaging level of distrust" that many teachers have toward their districts and their school boards.

Asked how districts "handled reopening timelines and arrangements, given the constraints," 69% said it was "not at all," "a little" or "somewhat" done well; 40% said characterized the process as not at all or a little "visible and transparent."

"The district over-promised and under-delivered to families. Teachers were often finding out about district decisions at the same time as parents," said a Los Angeles teacher in an elementary school with 20% low-income students.

None of the teachers said their school had returned to pre-pandemic conditions, and many said they hoped there would not be a return to "normal."

"The school system needed a major overhaul, and unfortunately, it took a pandemic to see the truth in this reality. I hope that there is no 'back to normal' and instead create a new way of what it is to be in school," said a San Diego area teacher in an elementary school with 40% low-income students.

Noting that pre-pandemic "normal was not working for many teachers," the Inverness researchers concluded, "Listening to California's leading teachers about how to apply lessons from pandemic education seems like an obvious next step."