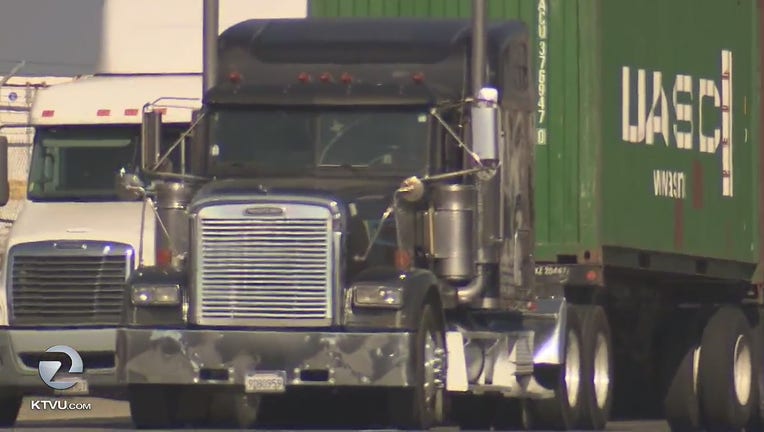 OAKLAND, Calif. - As the controversial so-called "gig worker law," AB5 officially takes effect in the new year, one group will not be included, for now.  The California Trucking Association earned a small victory in its legal fight against the state.  A federal judge issued a temporary restraining order, exempting truckers from the law, hours before it was set to take effect. The CTA sent this statement: “The California Trucking Association appreciates the court for recognizing the harm AB 5 poses to trucking. We can protect workers without crushing independent truckers in the process.”

Weston LaBar, the CEO of the Harbor Trucking Association, which shares members with the CTA, said this, “I hope this is a strong message to the state of California and the legislature that you don’t have the absolute power or right to do whatever you want, and perhaps take a strong look at AB5.”

In essence, AB5 could require companies to reclassify contract workers as employees, qualifying them for benefits like minimum wage and paid sick days. In the case of truckers, the law would forbid companies from using any truckers it does not directly employ, or owner-operators, roughly 70,000 of them according to CTA. “Taking that ability away from them not only does it create a situation that’s less advantageous for the drivers, it also makes it harder for trucking companies to deliver the same types of services to their customers," said LaBar.

The decisions comes on the heels of a similar lawsuit filed by Uber and Postmates. It calls AB5 "irrational and unconstitutional," accusing lawmakers of targeting app-based companies and depriving their contractors of the flexbility they want. “Finally people are waking up and seeing how it’s going to affect them, it’s good to have a mix of different vocations because of this stupid law, this is a bad law," said Bill Aboudi, the owner of AB Trucking.

The state also faces legal action from groups that represent frreelance writers. Supporters of AB5 say it's time to protect workers. The bill's author, Assemblywoman Lorena Gonzalez (D-San Diego) released this statement in reponse to the judge's ruling: “For decades, trucking companies have profited from misclassifying drivers as independent contractors, taking away rights such as meal and rest periods and fair pay,” she wrote. “We expect they will continue to invest resources in protecting their profits earned on the backs of workers, but we will continue to fight them at all levels to return jobs in the trucking industry to good, middle class careers.”