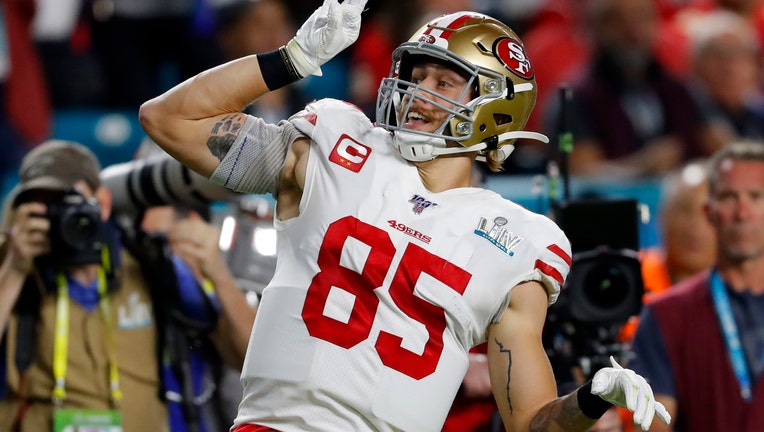 SANTA CLARA, Calif. - The San Francisco 49ers will open the 2021-2022 season on the road against the Detroit Lions.

The full, official NFL schedule will be released at 5 p.m. Wednesday.

But KTVU FOX 2 received a preview of the week 1 schedule.

FOX will air a doubleheader, starting at 10 a.m. on September 12, with the 49ers against former Cal and Marin Catholic star quarterback, Jared Goff with his new team, the Detroit Lions.

Other FOX games are the Philadelphia Eagles at the Atlanta Falcons, Minnesota Vikings at Cincinnati Bengals, and Seattle Seahawks at Indianapolis Colts.

The 1:25 p.m. FOX games are the Denver Broncos at New York Giants and the game of the week, Green Bay Packers at New Orleans Saints.

After a disappointing, injury-riddled season last year, the 49ers are projected to be a Super Bowl contender this season.

Las Vegas oddsmakers have the 49ers win total at 10 games.

But due to their last-place finish in the NFC West, the 49ers have the easiest schedule in their division, according to last season's win-loss percentages.

The 49ers have home games against the Arizona Cardinals, Los Angeles Rams, and Seattle Seahawks, along with the Atlanta Falcons, Green Bay Packers, Houston Texans, Indianapolis Colts, and Minnesota Vikings.

This will be the first NFL season with 17 regular-season games.

The 49er's extra game is against the lowly Bengals, who finished with a 4-11-1 record last season.

The NFC West teams will also face the NFC North teams this year.

49ers' players who missed much of last season, because of injuries, are expected to be fully healthy, including quarterback Jimmy Garoppolo, defensive end Nick Bosa, wide receiver Deebo Samuel.

Lance will be in Santa Clara, when the 49ers open their 3-day rookie minicamp on Friday, May 14.