SACRAMENTO - Pacific Gas & Electric spent more than $4 million on lobbying nationwide the same year its power lines were suspected of playing a role in the most destructive wildfires in California history.

Critics tell 2 Investigates they believe the money spent on improving the company’s image, which include paying for full-page newspaper ads and TV commercials, is to deflect public focus away from its downed power lines and onto climate change effects.

“I find it outrageous and reprehensible,” said victims’ attorney Frank Pitre, “that you can have this company, before all the facts are known, as to what their role is in causing the fires, meeting secretly behind closed doors.”

In addition to representing fire victims, Pitre is also a part of Up from the Ashes, a lobbying coalition aimed at holding PG&E accountable for destructive fires, according to the website. 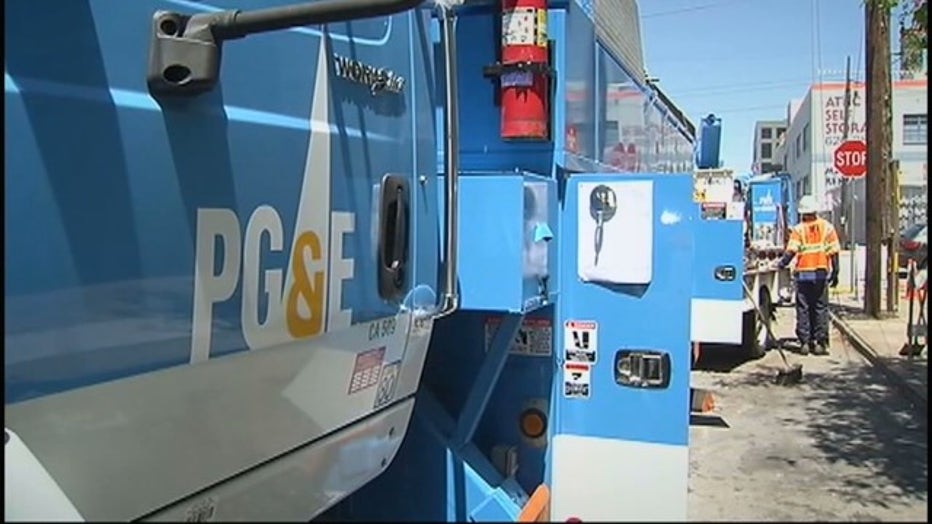 A utility truck works on a power outage.

CalFire has not yet announced the causes of the October 2017 fires. But early on, many started pointing fingers at the utility company. KTVU has reported on incident reports and dispatch audio linking downed PG&E power lines to some of the first flare-ups.

2 Investigates has received several reports of  PG&E trying to influence public and legislative opinion on utility disaster liability. Senator Jerry Hill said he noticed more PG&E lobbyists and executives in Sacramento at the start of the new year.

“The CEO of PG&E, certainly the COO and two other state utilities [SDG&E and SCE], have been walking the halls,” he said. “They’ve been visiting lawmakers trying to create, I believe, a change. A new narrative around the fires we saw last October and December.”

“It’s the ‘new normal,’ as they say. It’s about severe weather events,” Hill said. “If we allow [utilities] to change the law, they frankly won’t have a stake in the game. There would be no reason for them to do the best job they can to be responsible."

PG&E spokeswoman Lynsey Paulo told 2 Investigates that climate change and California wildfires are nothing new to the company. She said PG&E regularly participates in legislation creation relevant to their company.

CalFire and the CPUC are still working on investigations into what caused the North Bay fires.

PG&E declined 2 Investigates' multiple requests for an interview with its CEO Geisha Williams. On a November 2017 call with her shareholders Williams said the company is cooperating with both investigating agencies. She said, when the fires broke out, PG&E employees submitted incident reports when they came across fire sites where company equipment may have been involved. PG&E posted those reports on its website.

“This was an extraordinary confluence of events, and right now it’s too early to make an assumption about liability,” Williams said.

In addition to improving utility infrastructure and enhancing emergency response systems, the press release said the new administration will work to “update liability rules and regulations for utility services in light of [climate change].”  This concerned PG&E critics, like Pitre and Hill, who worry the utility is bolstering an alternative narrative to distract from possible blame.

2 Investigates asked Governor Brown’s staff  if PG&E visited their office or played a role in the announcement. Brown’s Deputy Press Secretary Brian Ferguson did not comment on whether PG&E is part of the effort. He said, “no matter the issue, our job is to meet with and hear from all parties who could be impacted by policy decisions and changes.”

Senate Bill 1088 is one of the new senate bills that ratepayer advocacy group TURN worries PG&E may heavily influence. The group believes that will effectively hurt ratepayers.

In its current version, the bill would require each electrical corporation or gas company to submit a safety, reliability and resiliency plan to the CPUC every two years.

The CPUC would have to review each companies’ safety plans. If the regulatory agency fails to approve the utility’s plan within a year, California utilities would be able to implement the unapproved plan anyway.  “SB1088 will give PG&E a blank check for anything they label as safety. It will make ratepayer monthly bills skyrocket,” TURN Executive Director Mark Toney said.

At a SB1088 Senate hearing, 2 Investigates spotted two PG&E lobbyists in the audience. PG&E confirmed one of its executives was also present.

“We believe PG&E is behind this bill because they are the main beneficiaries of collecting more money and protecting their shareholders,” he added.

PG&E spokeswoman Lynsey Paulo said the company does not have a position on SB1088.

“We feel there needs to be a more holistic solution as we look at the climate change issues that are facing our state right now. So, that’s what we’re hoping for,” she said.

On April 17, SB1088 passed 9-1 with one abstention, and was referred to the Senate Committees on Governmental Organization.

PG&E has been public about what it’s doing to help prevent future wildfires. The company has pledged a streamlined process to help fire victim customers to rebuild. PG&E contributed $1 million to launch a funding challenge to find rebuilding and resiliency strategies for California communities. PG&E also contributed $3 million to help restore communities impacted by wildfires.

Some critics, who include fire victims, believe these pledges seem disingenuous given PG&E's CEO Geisha Williams received a 106 percent compensation increase in 2017. Williams’ salary plus stock options, bonuses and benefits rose from $4 million to more than $8.5 million a year.

In all, PG&E executives received more than $9 million in potential compensation increases in 2017.

Regarding executive compensation, PG&E said Williams and COO Nick Stavropoulos were both promoted last year and their compensation raises reflect those advancements.

“The raise is based on PG&E achieving goals related to financial performance, public and employee safety, reliability, customer satisfaction and affordability,” said Paulo. “It’s also designed to drive [the CEO’s] performance for customers and shareholders. It also competes with pay from other similar competing companies.”

PG&E added, Williams was offered a bonus but did not accept it to demonstrate accountability to shareholders.