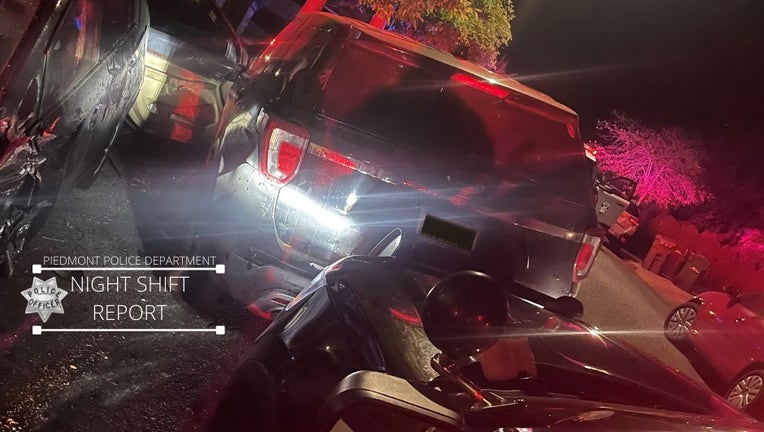 Piedmont police say they arrested a woman who crashed into several cars while driving under the influence in a stolen vehicle with her 1-year-old baby. (KTVU FOX 2)

A woman was arrested after allegedly crashing into several cars while driving under the influence in a stolen vehicle, Piedmont police said.

The mom, who was not named, was found hiding in the bushes with her 1-year-old baby after abandoning a stolen black SUV on Warfield Avenue on Tuesday night, police said in a Facebook message.

Police said they initially tried to stop the black SUV, but the driver fled. She apparently crashed into several cars while trying to escape from officers.

Officers said the SUV was stolen from San Francisco. Inside it, they found mail stolen from Oakland residents. Burglary tools and an open container of alcohol were also found by police, they said.

"Officers detained the subject who was exhibiting signs of being under the influence of alcohol," the press release said.

The driver was booked into Santa Rita jail and her infant was placed with Child Protective Services.