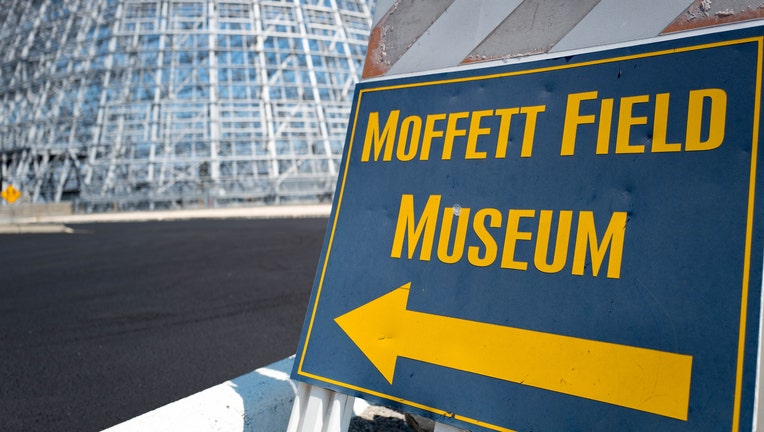 Sign with arrow directing visitors to the Moffett Field Historical Museum, with Hangar One visible in the background, within the secure area of the NASA Ames Research Center campus in the Silicon Valley town of Palo Alto, California, August 25, 2016.

The Perseverance Rover is the first of three missions aimed to collect Martian soil samples. This project, which started in 2013, is called the Mars Sample Return.

"We began work on it around 2013, 2014," NASA Ames engineer Helen Hwang said. "But this whole idea of Mars sample return, I mean we've been thinking about it I think since the days of Viking 1 and 2 in the 1960s when NASA landed on Mars successfully for the first time."

The samples will help researchers determine the age-old question: Is there life on Mars?

"Of course [it is] one of the burning questions," Hwang said. "But there's so many other questions that we have about our solar system, and one of them is simply you know, how did Mars form?" 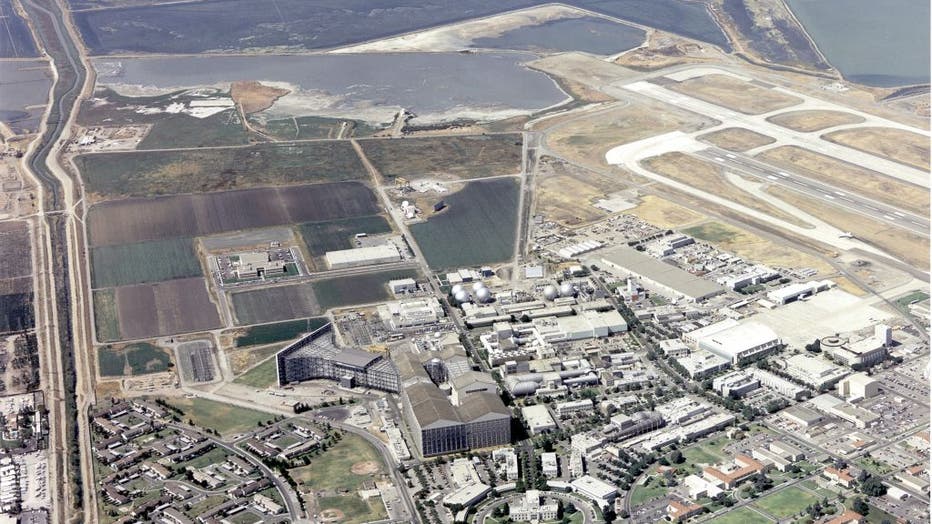 Aerial view of the Silicon Valley town of Mountain View, California, including the NASA Ames Research Center, Moffett Field, and the land which would become the Googleplex, headquarters of Google Inc. Courtesy NASA, 1987. (Photo via Smith Collection/

These soil samples would help researchers find out more about planet placements, life forms and answer a plethora of other questions NASA researchers have.

But arguably the most exciting aspect about this decades-long mission to collect soil samples from the red planet is the Bay Area's major contributions, Hwang noted.

"We tested many aspects of the entry and defense, so obviously we tested the heat shield materials, and the parachute and method NASA Ames," Hwang said. "So, there is a very strong connection that the Bay Area has to this mission."

The Ames research center backed the launch and landing of this rover in four major ways.

The first is that it tested the 165-foot-long and 51-foot-wide parachute attached to the rover in its wind tunnel which happens to be the largest in the world.

The parachute helped slow the rover's descent into the red planet, which "came in hot" at about 940 miles per hour and in much thinner atmosphere than Earth.

In 2017, during pre-launch tests, the Bay Area research center was able to stimulate the forces the rover and parachute would need to withstand during its entry into the Martian atmosphere.

The second contribution is that NASA Ames invented and developed the heat shield, known as PICA, used to protect the rover from extreme temperatures while descending through the Martian atmosphere.

Extreme temperatures occur as the rover collides with atoms and gas molecules at speeds of 12,500 miles per hour, according to NASA Ames spokesperson Rachel Hoover.

NASA Ames also equipped the spacecraft with sensors that collects measurements of the pressure and heating environment around the rover.

"Some of those sensors were actually built by hand by NASA Ames engineers," Hwang said. "And it's very significant because up until the Mars Curiosity mission we really didn't have much data from the missions as they were entering the Martian atmosphere so we really didn't understand the heating that was going on or the flow field around the spacecraft as its landing."

Before Ames engineers designed these sensors, researchers had to rely on simulations to prepare for descends into the Martian atmosphere.

"We found out that a lot of things we're doing were right but some of the things we were doing that needed improvement," Hwang said. "So, this time around we're really expanding upon that and we're taking a lot more measurements."

These measurements will help researchers understand various phenomenon occurring on the planet, helping better prepare it for upcoming missions.

And, the final major contribution from NASA Ames is more of an added bonus -- the first Mars helicopter fly that landed with the rover.

"This is very exciting," Hwang said. "We could potentially be able to explore Mars in a whole new way."

Up until now, NASA has only been able to explore Mars through stationary landers or rovers that are similar to a remote-controlled car.

With helicopter ability, researchers could have access to dangerous and treacherous terrain that they have not been able to explore in previous missions.

"NASA Ames has been studying this idea of a Martian helicopter for many years," Hwang said. "And we (assisted with a lot of the) analysis, and in the actual assembly of the helicopter itself."

This is a notable feat because Mars' atmosphere is much less dense than that of Earth, and helicopters have a hard time flying in low-density conditions, Hwang said.

The Perseverance Rover successfully landed on Mars around 1 p.m. on Thursday. The next part of the mission is launched a rocket that would collect the samples and bring them to the orbit. The final part of Mars Sample Return is to bring the samples floating in the orbit back to Earth.

Hwang said it could take up to 10 years for the samples to finally make their way back to our planet, but NASA is in the planning stages now.

"One thing to keep in mind that it's only about every two years, that it works out that Mars and Earth are in good alignment so that it's the shortest distance and takes the least amount of time to get there," Hwang said.

NASA is also working with the European Space Agency on the Mars Sample Return missions.

"This is a very big undertaking for both of our space agencies, and it will take some time, but it's happening, and that's really exciting," Hwang said.