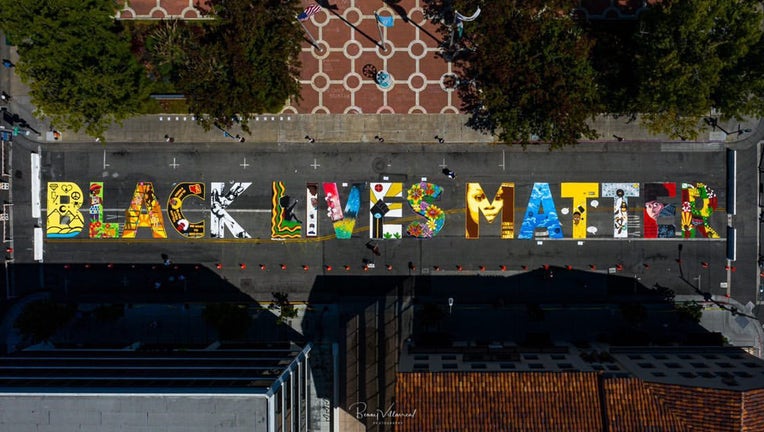 PALO ALTO, Calif. - The National Police Association is asking a Silicon Valley city to change a large Black Lives Matter mural in front of City Hall to remove the painting of a fugitive who is wanted for escaping prison nearly 50 years ago while serving time for killing a police officer.

The mural is made of up 16 individual letters, each having their own, unique art display, to demonstrate support for the global BLM movement. The second to the last letter is a mural of Joanne Chesimard, who has been wanted by the FBI since escaping prison in New Jersey in November 1979 and fleeing to Cuba, where she received asylum.

The National Police Association is asking a Silicon Valley city to change a large Black Lives Matter mural in front of City Hall to remove the painting of a fugitive who is wanted for escaping prison nearly 50 years ago while serving time for killing a police officer.

Chesimard, a leading figure in the 1970s so-called Black Liberation Army also known as Assata Shakur, was serving a life sentence for an array of charges, including first-degree murder and assault and battery of a police officer. In May 1973, she and two accomplices opened fire on two New Jersey state troopers, according to an FBI wanted poster. One was wounded and the other was shot and killed execution-style.

Nearly four decades after she fled the country, Chesimard has become a symbol of resistance and inspiration for protesters following the May 25 police killing of George Floyd. Demonstrators across the nation have voiced some of Chesimard's words in what has come to be known as the "Assata Chant".

The “e” in “matter” is where Chesimard is displayed on the Palo Alto mural, with a headshot of her looking over her left shoulder, appearing to resemble the cover of her autobiography. It also includes a portion of a quote from Chesimard that reads ‘we must love each other and support each other.” 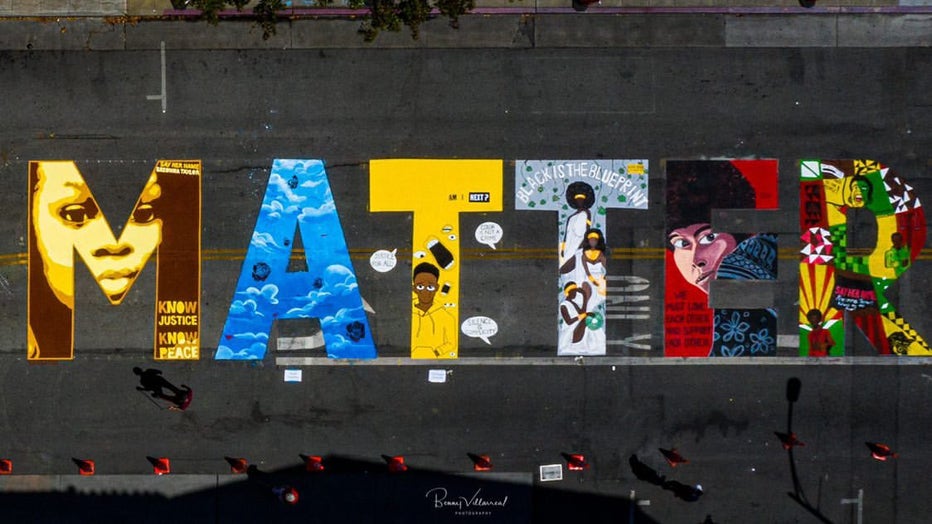 In the foreword of the autobiography republished in 2014, iconic black activist Angela Davis described Chesimard as "a passionate human being with an unswerving commitment to justice." She added that the FBI is trying to "frighten people who are involved in the struggles today."

The 245-foot-long and 17-foot wide painted mural on Hamilton Ave was designed by 16 Bay Area artists who were commissioned by the Palo Alto Public Art Program. After the city selected the crew through an application process, the artists had to submit sketches for the mural on June 25. Painting began on June 30.

Chief Communications Officer Meghan Horrigan-Taylor released a statement for the city, which said, in part, "The mural is temporary, and the City has no plans to expedite the removal of the mural sooner than currently planned. In no way does the mural take away from the value we have in our police officers who serve our community every day. Temporary art is a means of expression on difficult issues and the Black Lives Matter mural is thought-provoking and is inspiring conversation."

The police association created an online petition and they are asking supporters to sign.