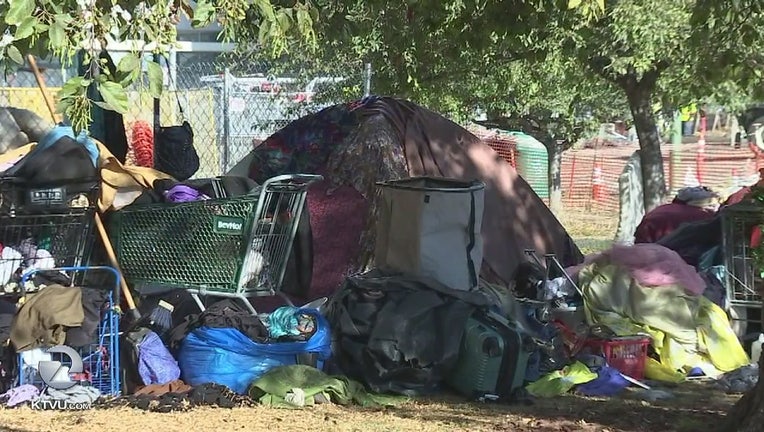 SAN JOSE, Calif. - The Santa Clara County Board of Supervisors Tuesday approved a plan to establish a homeless task force and a plan to address the region's housing insecurity crisis.

"It's (the task force) critical from a humanitarian standpoint," Supervisor Dave Cortese said in an interview Tuesday. "Obviously we have a lot of people living in creeks and underpasses, and 700 of them are veterans. It's shameful."

The task force - which is to be called the Unhoused Task Force - will work on serving homeless people in the county and helping them transition into temporary and permanent supportive housing with increased funding for mental health services, increased shelter beds countywide and more publicly available storage and hygiene services for unhoused people.

"It's costing us about $521 million a year to deal with the in-and-out recidivism of unsheltered people landing in different places in our system, whether it's at emergency rooms, whether it's jail, whether it's in and out of courtrooms, case work, behavioral health offices," Cortese said. "That's largely because they're not stabilized, they're not in one place long enough to get the continuous care that they need, and so where they end up instead is on the street, with police, acting out, having problems, parking in the wrong place. This all costs the county money, a lot of money."

The action plan for the task force calls for the addition of 2,000 shelter beds to the county's arsenal of "short-term solutions" to homelessness countywide within 12 to 18 months, with a requirement of at least 200 per supervisorial district. The task force will also work to expand state investments in the county through surplus state land and state-owned trailers and tents.

"It's actually going to be saving you money," Cortese said. "There's a business model here as well."

The task force will report back to the board by March 24 on its progress.

"Bill Wilson Center is currently housing more that 700 individuals a night," Sparky Harlan, CEO of San Jose's Bill Wilson Center, which operates as a shelter and service provider for unhoused youth and families, said Tuesday. "By April it'll be a thousand, and people don't realize that two-thirds of who we're housing are families."

She urged the board to partner with the city of San Jose and her organization to house homeless individuals in vacant vacation homes throughout the county through Airbnb.

David Tran, a spokesman for San Jose City Councilman Raul Peralez, told the board Tuesday that Peralez also is hoping the county will partner with San Jose.

Meanwhile, Geneva Strickland said she's happy to see the county working to address homelessness, but happier to finally have a home again, after getting housing on Jan. 15.

"It doesn't seem real," Strickland, 53, said Tuesday, adding that she had been living on the street for six years until this month. "It's really bad out there. If you're a woman out there, you're going to get hurt."

Her mother was one of 161 homeless people who died in Santa Clara County last year.

"Our grandmas and grandpas are out there," Strickland said. "This is America. We're supposed to care about people here. Where's the empathy?"

She said if the county doesn't do something quick to address homelessness and house homeless people, "we're screwed."

"My story could happen to anybody," Strickland said, but added that "the worst thing you can do is lose hope."

Jerome Shaw, president of the Sunnyvale Clients Collaborative - a group representing homeless people staying at Sunnyvale's HomeFirst shelter - said he appreciates Cortese and the board for having a "vested interest" in addressing homelessness.

However, he said, the county looks like its "tending" rather than "solving" the many issues around the county's vast homelessness problem.

He said while the county focuses on short-term solutions, he said the county must also expedite its long-term efforts to address homelessness through quicker access for homeless people to long-term supportive housing.