A North Bay composer has written a song that he hopes fire departments adopt as an anthem called Smoke Soldiers. In Santa Rosa Wednesday night, several restaurants celebrated and honored the firefighters with a toast.

SANTA ROSA, Calif. - A North Bay man has written a song he hopes fire departments will adopt as an anthem. It's called "Smoke Soldiers," a three-minute rock ballad paying tribute to firefighters.

Staff wore shirts emblazoned with the "Smoke Soldiers" logo, and a portion of sales were donated to the local firefighter's holiday toy drive.

"I'd like for us to make a toast to the 'Smoke Soldiers', hear, hear!" Superburger owner Dynasty Albrecht told her ustomers in her Yulupa Avenue restaurant. "I love the song, support it 110 percent, I think it's beautiful."

Some customers wore the T-shirts as well. 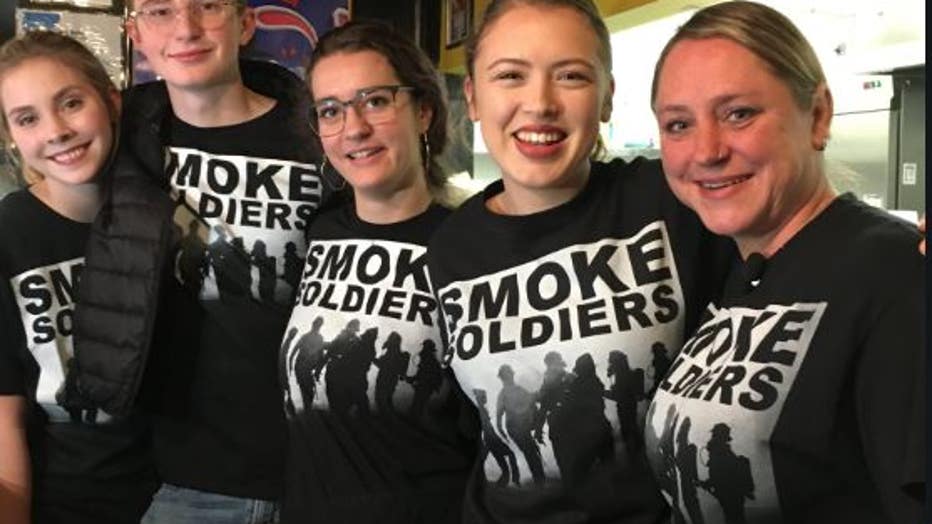 The video for the song features scenes from Sonoma County's catastrophic firestorm of 2017, with fire crews in the thick of it. Lyrics include lines like this: "Embers riding on monster winds, welcome to the crazy."

Gruenbaum is the composer, and founder of the "Smoke Soldiers" non-profit. He owns a college prep tutoring company, but also writes music.

"I started out with something silly like 'fight the fire' but that wasn't good enough, and I kept working on it," he said. Gruenbaum spent a few months writing the song.

He said he exppects that more and more people will start singing the song.

"Tons of people are hearing about it and want to come in next year and help us expand it," said Gruenbaum. "It's for a good cause, we all love our firefighters and we just want to support them."

At the toy warehouse, Firefighters Union Local 1401, and its 200 members shuttled thousands of toys in from station house barrels, and out to needy children.

The firefighters haven't had a donor quite as creative as Gruenbaum before, and they appreciate his results.

"He has donated over $1,000 dollars so far just on sales of his c-d's and t-shirts, " said firefighter Jessie Taintor, who runs the Toys for Kids distribution.

A total of 5,100 elementary school age children, selected by their teachers, will receive a toy from the drive.

Donations are accepted at fire stations until Christmas Day, and any left over will be saved for next year's collection.

"The most embarrassing part was finding myself in the video," said Taintor, who notes firefighters don't expect to be lauded in song.

But after repeat disasters in Sonoma County, people are feeling more grateful than ever.

"I got home after the Kincade Fire and my neighbors knocked on my door," recalled Taintor, "and they did that because I was the only firefighter they knew who they could thank."

A longtime firefighter dining at Superburger with his daughters also expressed appreciation that the "Smoke Soldiers" presentation recognizes volunteer firefighters like himself.

"With a crew of other firefighters, I was able to keep 8-10 houses from burning down in Coffey Park," said Ski Saunders. "When the fire was over, I was happy I could look at the tiny dent I could make in it."

Gruenbaum said he is hearing from fire departments in other communities that want to use his song for recruitment and are pairing the tune with their own photos.

In addition to Superburger, the other participating Santa Rosa Restaurants were Los Tres Chiles, Trattoria Cattaneo, and East West.

"It's amazing, and unless you've been through fire you don't know," said Greunbaum. "I always appreciated firefighters but boy, I wouldn't have a house without them."