OAKLAND, Calif. -  Nannette Bailey fell behind on her rent payments after she suffered a stroke and had a money order stolen. Then, her daughter and her children had nowhere to go, so the 55-year-old grandmother let them live in her one-bedroom Oakland apartment with her and her asthmatic son.

That’s when Bailey’s landlord decided to evict her, a case she eventually won with legal help.

So when Bailey watched the Moms 4 Housing struggle in her own city, where four mothers publicly took over a vacant West Oakland home owned by a Southern California investment company and decided to move in and not pay rent, it struck a chord.

“I was those moms,” she said. “That is something I would have done, too. Even though they had some attitude, what they said rang true.”

The mothers, led by 34-year-old Dominique Walker, stirred up a national controversy —garnering support from those who admired their direct-action approach to addressing the homelessness crisis to critics who say they squatted illegally and should have to pay rent like everyone else.

But no matter where you land on that debate, Bailey said, the mothers’ actions have already started to fuel change.

“There’s a movement that’s going to be made,” Bailey said, adding that she plans to start a grandmothers housing outreach network. “There are thousands of vacant homes, just rotting. I’m thinking a lot of moms and children might start taking them over.” 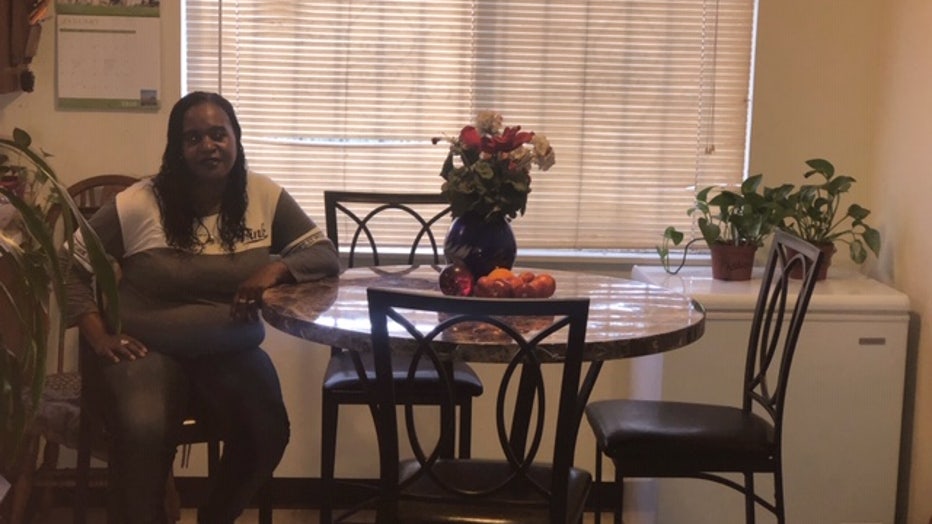 Nannette Bailey was almost evicted from her Oakland apartment.

Although the acts of civil disobedience by Moms 4 Housing was unusual, as was the heavy response by the Alameda County Sheriff’s Office, which deployed deputies in military garb, equipped with AR15s and an armored vehicle, to evict the unarmed moms, they shed light on the Bay Area’s housing shortage and the eviction process, which, each year, affects thousands of people whose stories are almost always left untold.

Data obtained by KTVU shows thousands of people annually are served with eviction lawsuits in the Bay Area. Yet while the number of evictions has been declining in the last several years from the peak of the 2008 financial crisis, housing advocates say the problem is actually getting worse because the displaced residents can’t find anywhere to go.

“I’ve been doing this 25 years, and what’s happening now is catastrophic,” said Anne Tamiko Omura, executive director of Oakland’s Eviction Defense Center. “If people in Virginia get evicted, they are going to have a softer landing and be able to find a place easier. There’s just nowhere for anyone to go if they live here.”

From 2014 to 2016, an estimated 1.5 million Californians faced evictions, according to a report by the nonprofit Tenants Together, which used “unlawful detainer” records (the court process for evictions) from the state Judicial Council. Nationwide, Princeton University sociologist Matthew Desmond, who wrote, “Evicted: Poverty and Profit in the American City,” estimates that 2.3 million evictions were filed in the U.S. in 2016 — a rate of four every minute.

Put into a national context, the number of California evictions are lower than elsewhere in the country.

San Francisco, San Jose and Oakland — where tenant protections are relatively strong — have a household eviction rate of between 1.5 or 2 a day. Compare that to cities in South Carolina and Virginia, which have the highest eviction rates in the country and where 10 to 17 households are evicted each day, according to 2016 data compiled by the The Eviction Lab at Princeton.

“I was those moms. That is something I would have done, too. Even though they had some attitude, what they said rang true.”

Alameda County filed 3,974 “unlawful detainers,” or eviction lawsuits, in 2019, according to data obtained by 2 Investigates from Alameda County Superior Court. In 2015, there were 5,330. The number of actual evictions has yet to be provided by the sheriff's office.

In San Francisco, there were 2,786  eviction lawsuits filed in 2019,  according to data provided by the Superior Court. Of those, the sheriff’s office evicted people from 834 homes last year. Armored vehicles were also not used during any of those evictions.

In Contra Costa County, records show there were 3,004 unlawful detainers in 2019, and of those, the sheriff served 1,622 eviction notices in which deputies showed up at homes and apartments, forcing tenants to leave, most often because they were delinquent on rent. “None of which required any tactical teams or armored vehicles,” Sheriff David Livingston wrote in response to a request by this news organization. In all, six arrests were made in 2019 during these evictions.

While unlawful detainers are the official legal actions that landlords file to evict tenants, Omura said landlords are also now simply threatening evictions, even though California has been passing stronger tenant protection laws.

“I’ve been doing this 25 years, and what’s happening now is catastrophic. If people in Virginia get evicted, they are going to have a softer landing and be able to find a place easier. There’s just nowhere for anyone to go if they live here.”

The problem for four mothers exploded on Tuesday, during a pre-dawn raid during which sheriff’s deputies ousted two mothers and two men from the Magnolia Street home where they had been squatting for two months.

Jason Wolford, a board member at the Eviction Defense Collaborative in San Francisco and a tenants rights attorney, said the mothers’ high-profile eviction has highlighted important issues on housing, investor speculation and evictions in the Bay Area.

While the moms’ case was atypical in most respects, Wolford said the mothers brought issues forward that affect people who typically receive eviction letters: people of color, single mothers, the elderly and the disabled.

Joe Colangelo, managing attorney at the Eviction Defense Fund in Oakland, concurred. “What the moms did was symbolic,” he said. “They made a stand. It seems like they’ve gotten the ears of the politicians and now people are asking, ‘What can we do?’”

Though Nanette Bailey won her eviction battle, she’s now trying to help others. Her 27-year-old niece was just given a 10-day notice to evict from her West Oakland home. That’s because her niece recently had a baby and hasn’t paid her rent because she can’t find a babysitter and had to leave her job.

Bailey said she wants Gov. Gavin Newsom and Oakland Mayor Libby Schaaf to “move really fast” in figuring out how to help. The two politicians held a news conference Thursday during the governor’s statewide homeless tour where he praised Moms 4 Housing and said he would meet with the group to hopefully find solutions.

“No one should be on the street,” Bailey said. “This is a crisis that needs to be addressed immediately.”

A mother is taken away in handcuffs from a Magnolia Street home by Alameda County sheriff's deputies. Jan. 14, 2020