OAKLAND, Calif. - When Californians vote on Proposition 22 in the November election, they will be deciding the future of companies like Lyft and Uber. What's at stake is how the startups treat their drivers and, on a larger scale, how companies in the so-called gig economy do business in the state.

The ballot measure would classify app-based rideshare drivers for Uber and Lyft as well as delivery and delivery drivers, like those who work for DoorDash and Postmates, as independent contractors. The proposition is trying to disregard Assembly Bill 5, which went into effect in January, requiring these Transportation Network Companies (TNC) to treat drivers as employees.

Prop. 22 would exempt app-based delivery companies from providing drivers the employee benefits such as minimum wage, overtime, unemployment insurance and workers' compensation that they had just obtained through AB5. Still, the proposition claims it would provide drivers with an earnings minimum, a health insurance stipend and vehicle insurance. Critics say this offer is dubious at best.

Jim Pyatt, a rideshare driver from the Modesto area and president of the Independent Drivers Alliance of California, supports the ballot measure.

He’s a retiree, who enjoys driving primarily for Uber, but has worked for Lyft as well as DoorDash. On Fridays and Saturdays he’s typically picking up fares in San Francisco.

“I like being able to go to the city and drive. There’s more demand there. I enjoy driving people to work at the hospital," he said to KTVU.

At most, he says he works up to 30 hours a week. When the coronavirus pandemic hit, that’s when he said he realized something. “I chose to continue to help my community.”

He tells an anecdote of the time he still drove for DoorDash and received an order for $400 worth of El Pollo Loco, a popular Mexican franchise. He thought it was strange to go through the drive-through for that amount of food.

“I sat there and they brought the food out,” Pyatt says. This was early on during the first weeks of the pandemic. “I went to Doctors Medical Center in Modesto. Someone bought food for the E.R. workers.” With tears in his eyes, he was proud he was still able to help people “in the middle of this total chaos.”

2020 Election FAQ: Get your questions answered to make your vote count

Pyatt says while moments of gratitude like that make him feel good, he uses the companies as gig-work and as supplementary income. He calls it an “important part of his retirement plan.”

The pandemic also made Pyatt look at considering unemployment insurance, something he says he never followed through on. Now, he’s worried how much is on the line for the ride-share companies with Prop. 22.

The companies themselves seem concerned. The Yes on 22 campaign has spent $180 million to convince voters to see things their way. Uber and Lyft were sued this summer by the state of California for violating the AB5 gig-worker law. That litigation has been subject to much back and forth in the courts and briefly prompted the TNC companies to threaten to cease operations throughout the state, until they received a reprieve. 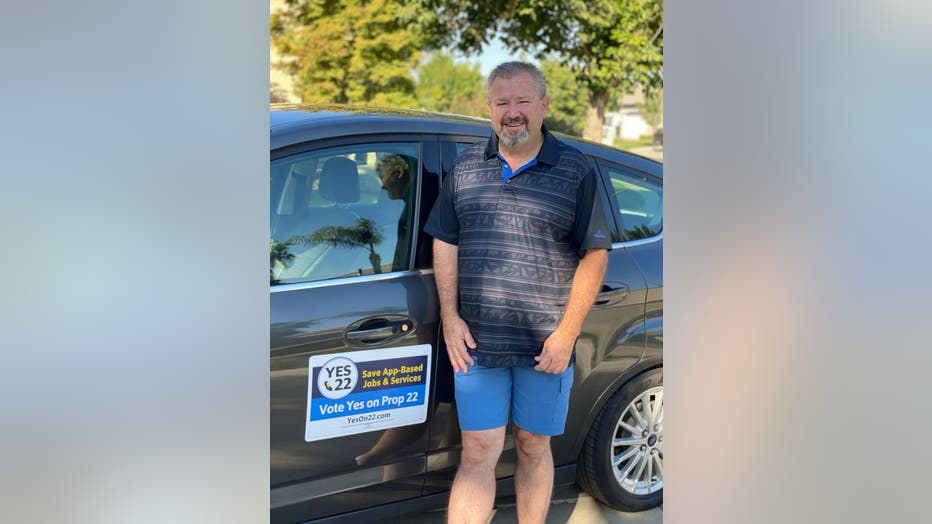 Pyatt sees the proposition as a backlash against state legislators. “State Assembly Bill AB5 was a bad bill. Shame on the politicians for making that decision without talking to the people." He questions the plethora of exemptions that have been made if AB5 “were such a great law.”

Part of the draw for many drivers in convincing them Prop. 22 is in their best interest, is an argument that it allows scheduling flexibility for the drivers. The Yes on 22 campaign repeats a survey that claims a ratio of four to one drivers prefer to work as independent contractors because of this.

“If the flexibility of being an independent contractor goes away and I don’t have that flexibility, then I’m out,” Pyatt says.

Though TNC ridership is reportedly down, due to the pandemic, Pyatt says with public transit reductions that Uber and Lyft are still there to fill that gap. For him, Prop. 22 is a win-win. “What driver wouldn’t want this?”

Mekela Edwards, who drove for Uber until the pandemic started, paints a different picture as someone who relied on ride-share driving as her sole source of income.

“Honestly we don’t know how AB5 could affect flexibility because [Uber and Lyft] are not following the law. There’s nothing in the law that says flexibility can’t continue. Only Uber and Lyft are saying this,” Edwards says.

Edwards lives in Oakland. She and her son both drive for Uber. But at the advice of her doctor and because of preexisting conditions, she stopped driving over concern of contracting COVID-19. Her doctor told her if she gets the disease she has a 15% chance of dying. “That’s a high percentage,” Edwards says.

Shortly after shelter-in-place was ordered, Edwards immediately returned the rental car she was using to drive. “When I stopped driving I was worried. How am I gonna pay my rent and eat?”

A judge on Monday ordered ride-hailing giants Uber and Lyft to treat their California drivers as employees instead of independent contractors, a shift that would guarantee benefits like overtime, sick leave and expense reimbursement for workers who make up much of the freewheeling gig economy.

For her, it was the pandemic that laid bare what few protections she has from her employer. Since she stopped driving, like many, she’s gone through the labyrinth of how to collect unemployment assistance, whether it be federal aid or through the state. The way she sees it, Prop. 22 won’t make her situation any better since she still won’t get paid sick leave.

“I never thought about how AB5 would help me. I went through five months of confusion. If Uber and Lyft would follow the law, it could have been avoided.” She’s referring to how the rideshare companies misclassify drivers as contractors and are not paying into state unemployment insurance.

UC Berkeley Labor Center finds Uber and Lyft should have paid $413 million into the state’s Unemployment Insurance Fund between 2014 and 2019.

“I am receiving unemployment,” says Edwards. “It was a difficult process and a lot of confusion. Her tenacity and determination in navigating the unemployment maze involved calling her Rep. Barbara Lee, State Assemblymember Rob Bonta and a local labor board. The fact that she had previously worked six years for Oakland Unified School District helped her establish her case. 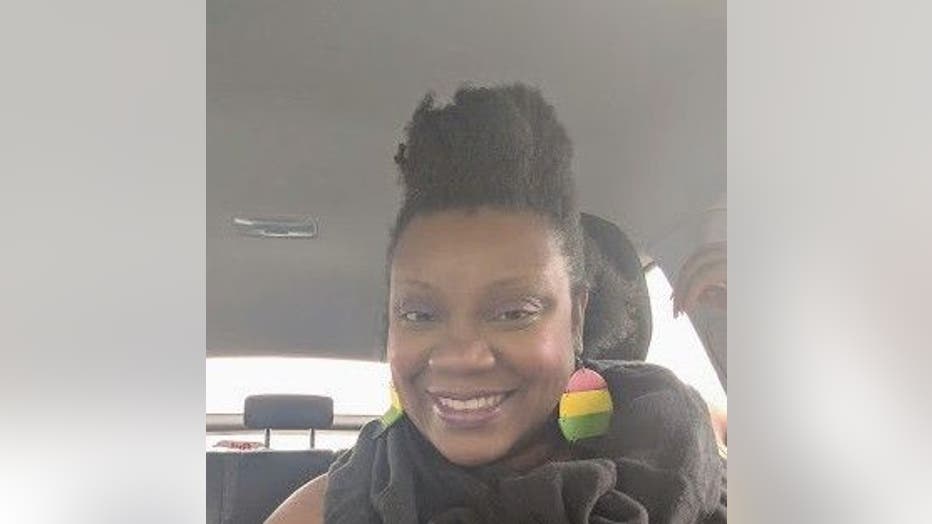 Edwards applied for state unemployment insurance, but because Uber misclassified her, she was approved for zero income. She applied for Pandemic Unemployment Assistance (PUA) through the federal government, something the No on Prop. 22 campaign says Uber and Lyft lobbied for, because it was essentially taxpayer money.

“Unemployment Insurance is paid by your employer. UI would be for a year and I wouldn’t have to rely on Congress to decide,” Edwards says. “By June I was in a weird holding pattern. I wasn’t receiving money and didn’t know if I owed money.” She describes the process as frustrating and a lot of “stop and go” and that it’s all because of being misclassified.

Now Edwards gardens and has a weekly Zoom meeting for fellow “lady drivers” where they chat, support each other and cope with the state of affairs. Many of them have also applied for unemployment, but like Edwards, were told they had “zero income.”

“The thing is they [Uber/Lyft] don’t follow the law, they try to offer you things to prove you are an independent contractor," she said.

The No on Prop. 22 campaign argues wages would be worse under the proposition. UC Berkeley Labor Center says the initiative’s alleged earnings minimum only guarantees $5.64 an hour.

“Under Proposition 22, drivers' could still earn as little as $5.64 an hour. Since most drivers currently earn more than that amount, the standards in the proposition are essentially meaningless,” UC Berkeley Labor Center’s Ken Jacobs says. “The companies have been slick in their deception. [Prop. 22] doesn’t provide meaningful guarantees for the driver. The central effect of Proposition 22 is to take away rights and benefits for drivers under California law.”

Prop. 22 claims keeping drivers as independent contractors would allow rideshare and delivery companies to maintain affordable rates and lower fares for customers. This in turn would boost companies' stock prices.

UC Berkeley Labor Center estimates prices would rise in the 5 to 10% range if companies followed AB5. However, Jacobs says internal economic analysis by Uber is flawed. “We think that assumption that all of the costs would be passed to consumers is not consistent with the empirical evidence.” He says Uber is basing their analysis on current gross driver earnings of $22 an hour. But the labor center estimates with employee status, drivers would receive gross total compensation of about $31 an hour.

Jacobs says if drivers were employees, TNCs would have incentive to use workers’ time more efficiently. “Currently drivers spend approximately one-third of their time waiting between rides. The cost of that inefficiency is borne by the drivers in their low earnings.”

More efficient use of drivers’ time would also reduce congestion, especially in dense metro areas, speeding up the time of each trip, which also factors into cost absorption, Jacobs says.

Critics of Prop. 22 fear a ripple effect on other sectors and question how the measure made its way onto the ballot. This is something Jacobs sees as problematic.

“I think it sends a signal if you have enough money, you don’t have to follow the law. If you’re big enough, law doesn’t apply to you,” he says.

Ultimately voters will decide on the law in November. A recent Berkeley Institute of Governmental Studies poll shows the race is tight with 39% in favor of Prop. 22, 36% opposed and 25% remain undecided.