A jury has found that Amber Heard defamed her former husband Johnny Deep.

Newly unsealed court papers reveal that Amber Heard had a "brief stint as an exotic dancer," and her ex-husband Johnny Depp did not want his friendship with disgraced rocker Marilyn Manson outed at trial.

After Johnny Depp won his defamation case against Amber Heard with a jury awarding him $10.35 million, Judge Penney Azcarate ordered the release of the secret documents on July 13.

The documents were published online over the weekend by legal commentator Andrea Burkhart, who crowd-sourced more than $3,300 to purchase the records.

The court papers detail the behind-the-scenes wrangling on both sides to try to get evidence admitted and kept out of the Fairfax County Circuit trial in Virginia.

A March 22 motion outlined Heard’s opposition to Depp’s team’s attempt to present damaging information about her past to the jury.

Heard's lawyer Elaine Bredehoft argued that Depp was trying to introduce "irrelevant personal matters" – including "Amber’s brief stint as an exotic dancer years before she met Mr. Depp," nude pictures of her and "unfounded allegations" that she had worked as a sex worker.

"Nude pictures of Amber Heard or comments about stripping or escort services would be highly distracting and unfairly prejudicial to the extent they portray Amber Heard as a sex symbol instead of a women's rights activist against domestic abuse," Bredehoft wrote. 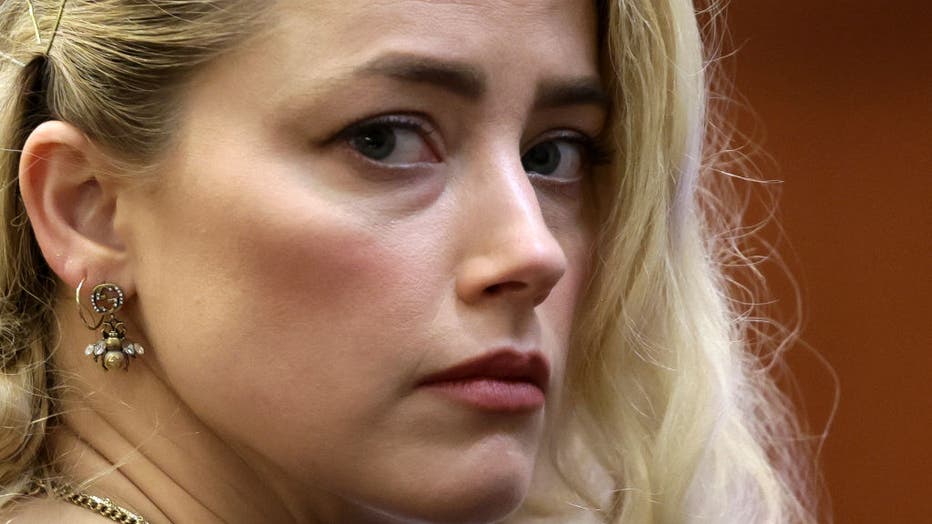 TOPSHOT - US actress Amber Heard waits before the jury announced a split verdict in favor of both Johnny Depp and Amber Heard on their claim and counter-claim in the Depp v. Heard civil defamation trial at the Fairfax County Circuit Courthouse in Fai

Heard’s team also fought to keep out Heard's sister Whitney Henriquez's "reality show video." None of these "personal matters" were introduced at trial.

A 965-page motion filed March 28 also revealed crude text messages between Depp and Marilyn Manson that were never presented to the jury.

Depp’s attorney, Ben Chew, aggressively fought to exclude any references to the actor's friendship with Manson, whose real names is Brian Warner, out of concern it would "smear Mr. Depp under a guilty by association theory."

Manson texted Depp in 2016 to say that Lindsay Usich "pulled an Amber," in reference to Manson's now-wife Usich calling the cops on him and claiming he beat her up. He described her as "Amber 2.0."

Depp responded, "I've been reading A LOT of material on that and sociopathic behavior…it is f—king real my brother!! My ex-c—-t is goddamn TEXTBOOK!!!."

Manson was blacklisted in the music industry after a number of women accused him of physical, mental and sexual abuse — including his former fiancé "Westworld" actress Evan Rachel Wood. He sued her for defamation in March.

Although the vulgar texts did not come in during the trial, Manson’s name did repeatedly crop up with the "Aquaman" actress' team painting her then-husband as a drug addict who went on cocaine-fueled binges with the heavy metal rocker.

After the six-week trial, the seven-member panel found that Heard had defamed Depp by penning a Washington Post op-ed referring to herself as a victim of domestic abuse and awarded him $10 million in compensatory damages and $5 million in punitive. The judge reduced the punitive damages award to $350,000 – the maximum allowed under Virginia law.

The jury awarded Heard $2 million in her countersuit, finding in her favor on a single claim that Depp’s attorney Adam Waldman had defamed her in a statement to the press calling her allegations a "hoax."

Both sides are appealing the verdict.