With Thao on top, Taylor can concede or pay for recount in Oakland's mayoral race

Oakland City Councilmember Sheng Thao on Monday night issued a statement where she essentially declared victory in the city's mayoral race saying she is excited to get to work, "as Mayor in January."

OAKLAND, Calif. - The latest results in the neck-and-neck Oakland mayoral race from the Alameda County registrar were counted Monday evening and Sheng Thao incrementally increased her lead to 682 votes over her opponent.

Thao on Monday night issued a statement where she essentially declared victory saying she is excited to get to work, "as Mayor in January."

"It's been a long journey, and I’m incredibly honored by the trust the voters have placed in me. This was a very close election. I want to congratulate Loren Taylor on the strong campaign he ran," Thao said. "Councilmember Taylor and his family have been making a difference for this city for generations and we owe him a real debt of gratitude. I hope to speak with Councilmember Taylor in the days ahead to find ways to work together for the good of our city."

For those who voted for other candidates, Thao pledged to be a mayor for all of Oakland.

Taylor has not yet conceded in the race. With Thao on top, Taylor can either pay for a recount or concede. He does plan on holding a news conference Tuesday at 10 a.m. 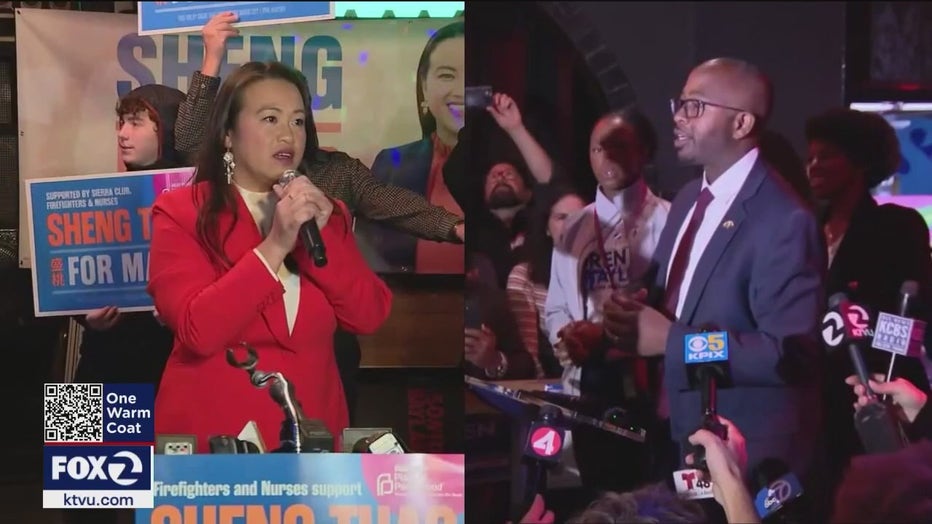 Almost two weeks after Election Day, the registrar finally wrapped up the results. The registrar said this was the last update until the election is certified, Dec. 8.

In the meantime, the back and forth in this race to succeed the termed-out Mayor Libby Schaaf, has been dramatic. Taylor had initially led in first place votes, but after ranked-choice votes were calculated, Thao made a strong comeback and took the lead last week.

"We always like to say that every vote counts. So it's important that we get all of them in especially on these close races," said Tim Dupuis, registrar of voters for Alameda County.

Dupuis said the office was counting a final batch of ballots early Monday, but there were still 2,500 ballots from Alameda County. He explained the ballots had signature issues that may or may not count in the days to come.

"We'll see a husband and a wife maybe sign the other's ballot and so we'll reach out to those because they don't match our signature and see if they want to remedy that with us," Dupuis explained.

Councilmember Taylor spent part of his Monday at a turkey giveaway in his home district. "I'm grateful for all of those who have been supporters of mine and really just being a part of this electoral process, this is what democracy is about and we have to make sure every vote is counted," he said.

Thao said she was waiting to speak publicly until after the latest round of ballots was counted. Her campaign issued a brief statement: "We are optimistic that our lead will hold and that Sheng Thao will be the next Mayor of Oakland."

Thao was Oakland's first Hmong councilwoman, a progressive who is also a single mother and domestic violence survivor. She has repeatedly said that she knows what it's like to live paycheck to paycheck.

She has not been shy about her life story as a child of refugees, growing up in poverty. In her statement she recalled living in her car 15 years ago with her child. "I was living my car with my baby. I've been through a lot to get to this moment, and have had so many people lift me up in order to get here."

Thao was backed by many of Oakland's labor unions, including the firefighters' and tenants' unions. She has said she wants to spend more on the city's Department of Violence Prevention. On the campaign trail, she said her mission was to get funding for housing and homeless services, protect renters and champion workers' rights. Both she and Taylor supported hiring more police officers.

"Moving forward, we are going to work to make Oakland the most proactive city in California on housing and homelessness. We're going to have an aggressive housing policy that protects renters, fights displacement, and treats our unhoused with the dignity they deserve," Thao said.

Before being elected to city council, Thao had been the chief of staff for Oakland Councilwoman Rebecca Kaplan. She attended Merritt College and graduated from UC Berkeley with a degree in legal studies.

The elections' office is also hand counting 1% of the ballots to make sure they agree with the computer counted votes. The election results are expected to be certified, Dec. 8 2023.