17-year-old receives master’s degree from TCU, and his 14-year-old brother is following his lead

A 17-year-old getting a master's degree certainly seems to be one-of-a-kind, but he also has a younger family member, who is now following in his footsteps.

FORT WORTH, Texas - A 17-year-old is now believed to be the youngest student to ever receive a master’s degree from TCU.

Carson Huey-You walked during Saturday afternoon’s ceremony, where he accepted his master’s degree in physics after receiving his undergraduate degree at 14.

Something like this certainly seems to be one-of-a-kind, but he also has a younger family member, who is now following in his footsteps.

Carson’s purple cap and gown blends in with the rest of his graduating class at TCU, but he stands out because of his young age.

“Outside of just school and academia, I’m really just a normal 17-year-old kid. I like playing video games, I have a dog, I have my brother at home, so, we have fun,” he said.

Carson’s brother, Cannan, is 14, and an electrical engineering major at TCU. 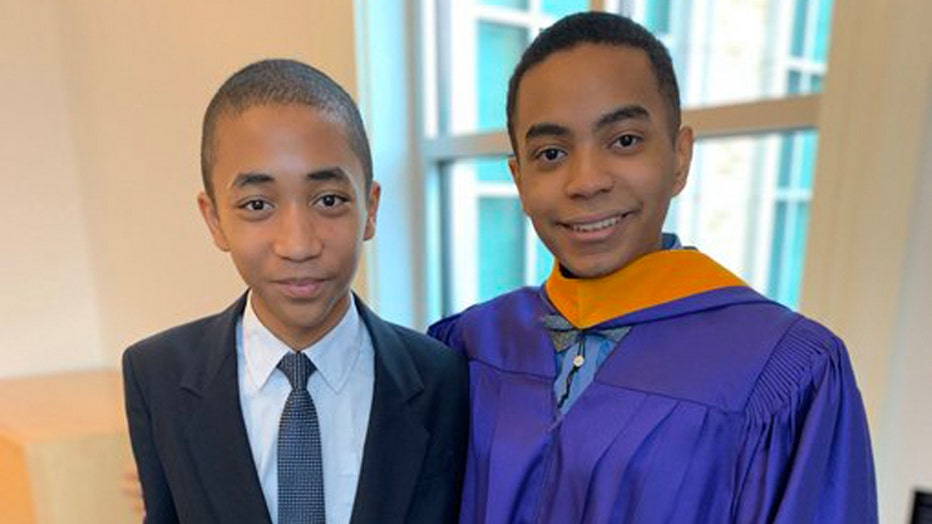 “It’s obvious they are nerds,” their mother, Claretta Kimp, said.

But their mother added that being a nerd isn’t a bad thing.

She knew Carson had a bright future at an early age.

“By the time he was 2 years old, he was reading chapter books,” she recalled.

She homeschooled Carson until he began eighth grade, at age 5.

He started college at TCU at the age of 10, and his brother was right behind him a few years later.

“They were shorter, but they were almost equally smart as they are now, so I had to kind of equally assess if they were ready to go to college,” said Magnus Rittby, their physics and astronomy professor.

Rittby said being their mentor is a highlight of his career, and he becomes emotional thinking of their accomplishment and what the future holds.

“There is no limit. Not even the sky,” Rittby said.

After getting his master’s degree, Carson said he’s now going back to TCU for my PhD.

The brothers feel the path they’re on is what’s best for them.

Cannan wants to be an astronaut.

“I think a lot of kids have that dream, for some reason, and hopefully I’m the one to accomplish that,” he said.

But right now, the engineering major jokes about a project he’s focused on back home.

“I have all of my Lego Star Wars sets spread out there,” Cannan said.

As for Carson, he has no set plans.

“For me, I like physics and science in general because you get to understand the how and why of just a number of different subjects,” he said. “So really, just kind of digging into that rabbit hole and figuring out what’s going on behind equations or systems or whatever it is you’re trying to solve.”

His professor believes he’ll be working with world leaders, and that makes sense to his mother.

“It’s a beautiful thing to be a nerd because nerds will rule the world at some point,” Kimp said.

For now, the 17-year-old said he’s just grateful for the support system leading him to graduation and beyond.

“I had a village, and sometimes, well, all the time, that’s what it takes,” Carson said.

Their mother said it’s been a family effort, as she’s been driving them to and from school all this time.