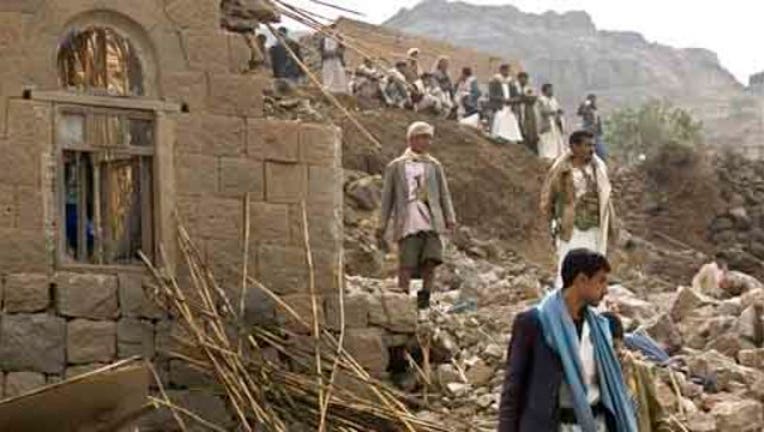 SANAA, Yemen (AP) — As tons of desperately needed medical supplies await clearance to be flown into Yemen, aid workers warned Tuesday of an unfolding humanitarian crisis, saying at least 560 people, including dozens of children, have been killed, mostly in a Saudi-led air campaign and battles between Shiite rebels and forces loyal to the embattled president.

More than 1,700 people have been wounded and another 100,000 have fled their homes as fighting intensified over the past three weeks, the World Health Organization said.

The Red Cross shipment would be the first to reach Yemen since the start of the Saudi-imposed air blockade. Sitara Jabeen, a Geneva-based spokeswoman for the International Committee of the Red Cross, said a cargo plane with 17 tons of medical supplies was in the Jordanian capital, Amman, awaiting the go-ahead from coalition forces to land in Sanaa, hopefully on Wednesday. Another 35 tons of supplies were also ready for shipment, she said.

"If these medical supplies do not reach Yemen, then unfortunately we are afraid many more people will die," Jabeen said.

She said a surgical team was also awaiting clearance to dock in the embattled Yemeni port of Aden, where heavy fighting Monday left streets littered with bodies.

The Saudi-led air campaign, which supports Hadi, now in its 13th day, so far has failed to stop the Houthis' advance on Aden, Yemen's second-largest city, which was declared the provisional capital by Hadi before he fled the country for Saudi Arabia as the rebels closed in two weeks ago.

WHO said Tuesday that at least 560 people have been killed and 1,768 wounded — many of them civilians — since the rebels and their allies launched an intensified land grab on March 19. Among the fatalities are at least 293 people killed since the March 26 start of the Saudi-led air campaign in support of Hadi.

The dead include at least 74 children killed since the start of the airstrikes, the U.N. children's agency said. At least 44 children have been wounded.

Comprehensive casualty figures are difficult to collect and verify because of the ongoing violence, and aid agencies warned the overall death toll is likely far higher.

The Saudi campaign has turned Yemen into a new proxy war between the kingdom and Iran, which has backed the Houthis, though Tehran denies aiding the rebels militarily.

Civilians have paid a heavy toll for the violence that mushroomed from an internal power struggle into a regional war.

"They are being killed, maimed and forced to flee their homes, their health threatened and their education interrupted," Harneis said in a statement, released Monday. Warring factions have also increased their recruitment of children under the age of 18.

Humanitarian groups say they are running out of supplies and have called for a temporary halt to the fighting to allow medical teams and fresh medical supplies to arrive in the country and for residents to identify and bury their dead.

UNICEF said the violence has disrupted water supplies in areas of southern Yemen and that sewage is overflowing in some locations, raising the risk of outbreaks of disease. Water systems have been repeatedly damaged in Aden and two other areas, UNICEF said, adding that it is providing fuel for water pumps.

Hospitals are struggling to treat large numbers of wounded with insufficient supplies and some medical facilities have come under attack, the agency said.

On Tuesday, Saudi-led coalition jets bombed a rebel-allied military installation in southern Yemen as local tribes battled the Shiite fighters and their allies in the area, seizing a makeshift camp and weapons, Yemeni military officials said.

Residents say the camp was close to a school, and the rebel television station, al-Masirah, said three children were killed in the airstrike. The medical volunteer, who spoke on condition of anonymity for fear of reprisals, could not confirm the children's deaths.

About 30 miles (50 kilometers) south of the camp, local tribes battled with Houthis who had set up a makeshift camp in the area, driving the rebels away and seizing their weapons, a local resident said, also speaking on condition of anonymity for fear of reprisals.

Fighting intensified in Aden on Monday, with the rebels and their allies making their strongest push yet to seize control of the city, a main stronghold of Hadi supporters.

The fighting has raised doubts over the possibility of landing ground forces from the Saudi-led coalition to carve out a secure enclave for the return of Hadi.

"Conditions are very dangerous right now," UNICEF's Dr. Gamila Hibatullah in Aden was quoted as saying. "Hospitals are overflowing, and even ambulances have been hijacked."

In Islamabad, Prime Minister Nawaz Sharif addressed a joint session of parliament convened to debate whether Pakistan would join the Saudi-led coalition.

Sharif warned Iran to "ponder upon its policy and consider whether that policy is correct or not."

Also on Tuesday, Jordan circulated a draft United Nations resolution that would ban arms shipments to Houthi leaders and the country's former president and his son.