FOX 29's Kelly Rule is at Cooper University Hospital where a 10-year-old boy remains in critical condition following a shooting at a high school football game.

PLEASANTVILLE, N.J. - Six men have been charged after a shooting at a New Jersey high school football game, including the alleged gunman and one of the three people wounded in what authorities said Saturday was the result of “petty vengeance.”

The wounded man, Ibn Abdullah, 27, was the target of the shooting and was charged because a gun was found on him when emergency responders went to his aid, authorities said during a news conference at the school. He is in stable condition and will be undergoing surgery.

A GoFundMe set up on behalf of the 10-year-old has raised more than $11,000 as of Monday morning. 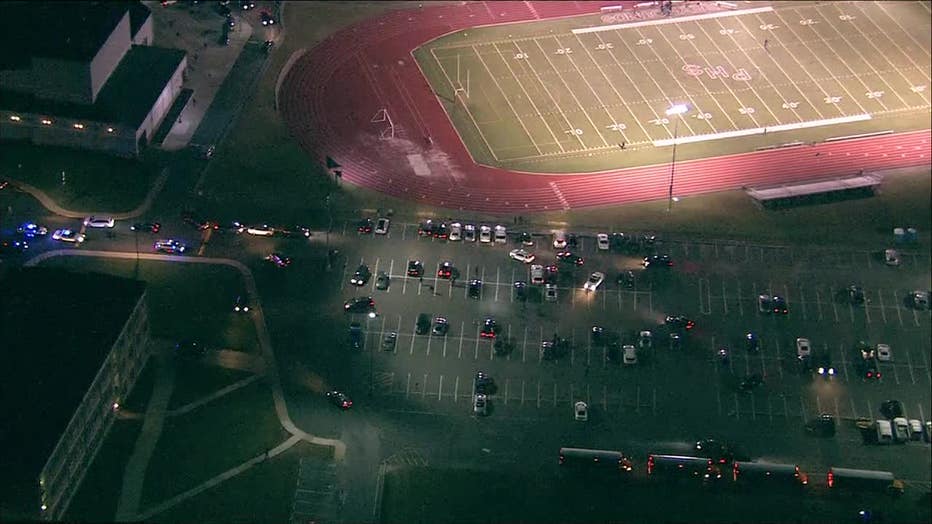 SkyFOX flew over the scene after gunshots rang out at a high school football game.

The shooting at a packed Friday night playoff game between the Camden Panthers and the Pleasantville Greyhounds sent fans and players frantically running for safety.

Authorities declined to discuss what led to the shooting, citing the ongoing investigation, but said it did not appear that any of the men charged had any connection to the game.

"Unlike some of the shootings that have occurred on school premises throughout the country, this incident had nothing to do with the students of Pleasantville High School or Camden High School," Atlantic County prosecutor Damon Tyner said in a news release.

"The venue simply presented an opportunity for criminals to pursue their own form of petty vengeance against one another. As a result, an innocent child was caught and injured in their crossfire. Our community will not be held hostage by a few idiots intent on jeopardizing our safety and the safety of our children."

Tyner said Alvin Wyatt, 31, of Atlantic City, has been charged with three counts of attempted murder and two weapons counts. Authorities said Wyatt was captured in the end zone moments after the shooting by a Pleasantville officer who was part of the security detail assigned to the game.

Three other men — 26-year-old Vance Golden, 28-year-old Tyrell Dorn and 27-year-old Michael Mack — face weapons charges. A fourth, 27-year-old Shahid Dixon, faces weapons and eluding charges. Abdullah is also facing weapons charges because a gun was found on him. It wasn't known Saturday if any of the six have retained attorneys.

The stands in Pleasantville, near Atlantic City, were packed Friday night to watch the Greyhounds, which won its first division title in 43 years this season. Law enforcement officers who were working the game quickly jumped in to help the wounded victims, as did some firefighters and other officers who were off-duty and happened to be attending the game.

When the shots rang out, panicked spectators and some of the players knocked down a fence in their haste to escape the confines of the field. Some children were separated from their parents, and other parents held babies and young children tight to keep them from being run over by those fleeing, according to Jonathan Diego, who was at the game.

"It was mayhem, literally people coming in waves running away," said Diego, who helped coach a Pleasantville youth football team involved in a game in which three people were shot and wounded in 2005. All survived. That same team was practicing in 2015 when a spectator was shot but survived.

Diego said his friend, a retired paramedic, gave first aid to the young boy who was shot.

"He applied pressure to the little boy's wounds on his neck, trying to slow down the bleeding until the ambulance could come up," Diego said.

Videos obtained by The Associated Press show people hitting the ground, running from the bleachers and jumping over chain-link fences as gunfire sounds. At least six gunshots are audible in a video from Jersey Sports Zone, which also shows players stop mid-play, look at the stands and then turn and run.

Proseuctors said the suspects fled the scene in a vehicle. One of the passengers allegedly threw a gun out of the vehicle while entering Atlantic City.

Officials said the game will be resumed on Tuesday at a neutral field, with no spectators allowed.

In a press conference, Tyner referenced a Thursday shooting at a Southern California high school, where a 16-year-old boy killed two students and wounded three others. The shooter succumbed to his injuries on Friday.

"High school playoff football should be a cause for community celebration, not the backdrop for panic and terror," Murphy said Saturday. "Last night was a stark reminder that no community is immune from gun violence, and that we must not ever give up in our efforts to prevent such senseless acts."