LOS ANGELES - Jet fuel dumped from a Delta airliner preparing to make an emergency landing at Los Angeles International Airport fell over a wide swath of the area, sending hazardous-materials teams to multiple schools, but only minor injuries were reported and nobody was hospitalized, authorities said.

There are many questions about why a Delta Airlines jet dumped fuel over a wide swath of Los Angeles dousing at least six schools that resulted in at least 60 people being medically treated.

Officials confirmed at least 60 people have been treated including elementary school students after a plane dumped fuel on the school's playground near Cudahy and South Los Angeles schools on Tuesday.

An estimated 20 students were treated after a jet fuel spill at Park Avenue Elementary School in Cudahy.

All patients at Park Avenue Elementary School in Cudahy reported only minor injuries, fire officials said. No one was transported to the hospital by ambulance.

According to the Los Angeles County Fire Department, the impacted schools and number of patients at each school are as follows:

Those patients received minor injuries only and did not require transport to a local hospital for further evaluation.

Those patients received minor injuries only and did not require transport to a local hospital for further evaluation. 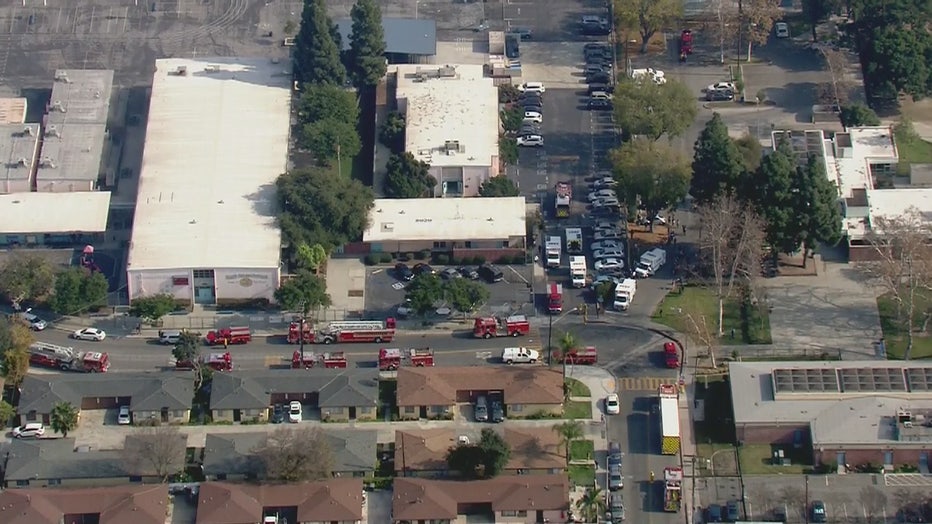 More than 70 firefighters and paramedics responded to the school to provide care for those complaining of injuries.

The Delta Air Lines flight bound for Shangai from Los Angeles International Airport was diverted minutes after takeoff, officials said. The plane safely made an emergency landing Tuesday afternoon and no injuries were reported.

"Shortly after takeoff, Flight 89 from LAX to Shanghai experienced an engine issue requiring the aircraft to return to LAX," Delta Airlines said in a statement. "The aircraft landed safely after an emergency fuel release to reduce landing weight."

"Shortly after takeoff, Flight 89 from LAX to Shanghai experienced an engine issue requiring the aircraft to return quickly to LAX. The aircraft landed safely after a release of fuel, which was required as part of normal procedure to reach a safe landing weight. We are in touch with Los Angeles World Airports and the LA County Fire Department and share concerns regarding reported minor injuries to adults and children at a school in the area.

Delta continues to investigate the issue. Individuals and property owners who believe they may have been affected by the jet fuel release can contact Delta at 800-441-5955 for more information."

"I am distraught to learn that an airplane returning to LAX has dropped engine fuel on children at schools, including Park Avenue Elementary School in the City of Cudahy, and Tweedy Elementary School in the City of South Gate, among others. My office is working diligently to ensure the County deploys an adequate emergency response to the site of this unfortunate incident. We have also been in communication with elected representatives, Los Angeles Unified School District, and the South Coast Air Quality Management District. Our County Departments, including the LA County Department of Public Health, LA County Fire Department’s Health Hazardous Materials Division, LA County Department of Mental Health, and the Office of Emergency Management, are taking the necessary action to quickly respond to this emergency.

I urge a thorough investigation to determine what caused this incident. My priority right now is making sure that we are attending to the health and safety of impacted students and community residents. Individuals with health-related questions should call the Department of Public Health’s multilingual call center at 211."

For those individuals directly affected by this incident, fire officials advise the following:

• Please be sure to wash any exposed/contaminated clothing separately with regular detergent.
• Make sure to do a full head-to-toe shower with soap and water while they do not expect any significant side effects as a result of this incident, if you do feel like you are experiencing a health-related issue, please seek consult with your primary physician.

In an effort to provide the public further information on the incident today, Delta Airlines has provided the following Media Relations phone number: (404) 715-2554. The Los Angeles County Department of Public Health (DPH) is working with 2-1-1 to provide environmental health information to concerned members of the public. The non-local number for 2-1-1 is (800) 339-6993.

Also, the Los Angeles Department of Mental Health (DMH) Access Hotline can be reached at 800-854-7771. All schools impacted today will be open for the normal schedule of classes on Wednesday.

'The Los Angeles County Department of Public Health (Public Health) advises residents affected by the jet fuel release in the Cudahy area that the incident is still under investigation by multiple authorities. Yesterday, students that were exposed were sent home by emergency services personnel with instructions on how to thoroughly clean themselves and their clothes. Students at affected school sites returned to regular school today.

Contact with jet fuel can cause skin irritation and/or upper respiratory irritation such as cough.  These symptoms are generally expected to improve on their own. However, if you do feel like you are still experiencing a health-related issue, please contact your medical provider.  For any life-threatening emergencies, please dial 9-1-1. Residents who think they have come in contact with the jet fuel should do a full head-to-toe shower with soap and water.  Please be sure to wash any exposed/contaminated clothing separately with regular detergent.

If odors remain on clothing after thorough washing, they should be discarded. Residents with outdoor vegetable gardens and fruit bearing trees are advised to discard all unharvested produce. Fruits and vegetables grown in the future should be safe for consumption, according to our partners at the Environmental Protection Agency (EPA).'

"I was shocked and angered to learn that an airplane dumped fuel, as it flew over Park Avenue Elementary School in the city of Cudahy today. Students and employees who were on the playground were sprayed by the fuel, or inhaled fumes.

Some had to be treated for injuries, including breathing problems and skin irritation. The county fire department and paramedics responded immediately, along with school police. Educators also visited every classroom to ensure the safety and well-being of all students and staff. Our experts from Los Angeles Unified's Office of Environmental Health and Safety also responded quickly.

They are continuing to work tonight to make sure the campus is decontaminated, clean and safe for school tomorrow. I have learned that the plane needed to discharge the fuel to lighten the load prior to making an emergency landing at the Los Angeles International Airport. However, Federal Aviation Administration regulations require planes to dump fuel over unpopulated areas, certainly not over a school. Fortunately, the FAA is already investigating this matter. My office has been in contact with government officials and Los Angeles Unified staff to ensure the health and safety of all involved. I will continue to advocate for our Park Avenue Elementary School family, and provide updates when more information is available. I am sorry our school community had to go through this very scary incident today."

"As many of you may be aware, there was jet fuel released over parts of the Downey community during an emergency landing at LAX earlier this afternoon.  After speaking with our local Fire Department, the areas affected by this were mostly in the north/west parts of the city. However, out of an abundance of caution, the district office began to reach out to all of our schools in regard to this incident. None of our schools reported the visible site of fuel droplets, however, there were reports of fumes on some campuses. Immediate action was taken on those campuses and outdoor playground access was adjusted and students were kept indoors. As the safety of our students and staff is always our number one priority, we wanted to inform you of the steps taken today.  As always, we thank you for the continued support of our schools!

No students were transported to the hospital from any of the schools impacted by the fuel spill, additionally, no evacuation orders were issued for the surrounding areas.