Red paint defaces ‘Back the Blue’ mural in Tampa

Tampa city officials say the 'Back the Blue' mural in downtown was vandalized. Aerials show red paint and tar splattered across it.

TAMPA, Fla. - Tampa police are looking for the people who defaced a mural painted on the roadway in front of the Tampa Police Department's downtown headquarters.

The "Back the Blue" mural was painted over the weekend, but by Wednesday morning, the mural was splattered with red paint and tar.

Officials said it appears to have happened around 10 p.m. Tuesday. Cameras caught a subject, wearing all black clothing and a black mask, getting out of the hatchback of a black vehicle. The subject poured what officials believe is tar on parts of the mural.

The vehicle was seen on camera circling the area of TPD headquarters beforehand.

Later, just after midnight, a second subject spray-painted an obscenity and "BLM" in red on a mesh, roll-up utility door on the north side of TPD's building. The person also poured red paint on the mural.

A police spokesperson said the video is not being released because it’s part of an ongoing investigation. 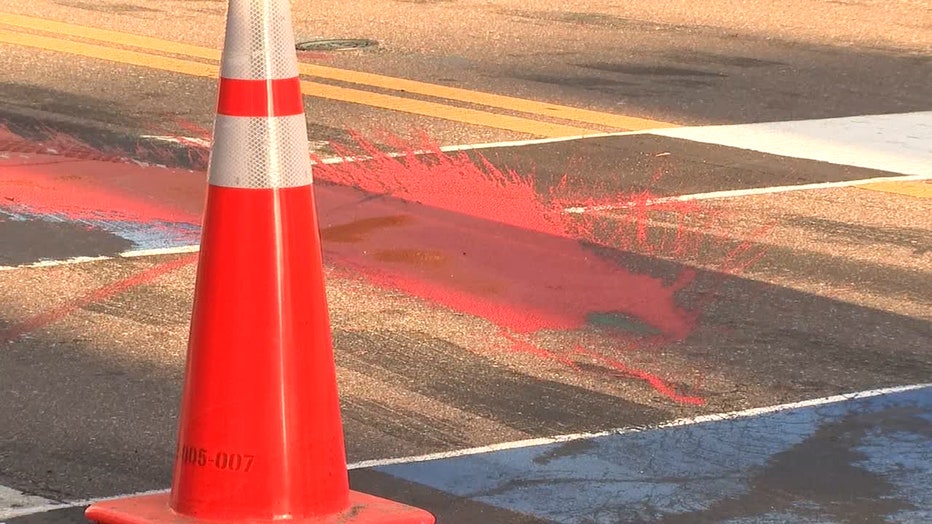 Police said the original mural was not properly permitted, so it is unclear whether the mural will be repainted.

"The Tampa Police Department expects everyone to express themselves in a lawful manner. Murals painted in the city roadway need to be approved. We will continue to work with any group to make sure their First Amendment rights are heard," said Chief Brian Dugan.

Around a dozen volunteers came to repair the defaced mural Wednesday afternoon, but left after talking with officers.

“Is it a disappointment that it looks the way it is? we would all like to see it the way it was,” said Barbara Brown, who brought painting supples.

“I would absolutely like to see it stay here. And and I think we should have more artwork across the city that supports all the diverse groups and all the local heroes,” said Tamara Sugar.

Organizers say they weren’t surprised that the mural was defaced.

“Social media has been abuzz with people who have been threatening it, trying to organize it since it went down,” said Kelli Campbell, an organizer with 'Back The Blue Florida.'

She said volunteers will repair the mural as soon as possible and will repaint it again and again if necessary.

Campbell told FOX 13 that they had gotten verbal approval from Mayor Jane Castor’s office, but the mayor’s spokesperson says the city was working through the formal process, and it wasn’t completed.

“While it’s true we didn’t have the piece of paper, we did have the mayor’s verbal approval and it was said in front of hundreds of law enforcement officers," Campbell said. 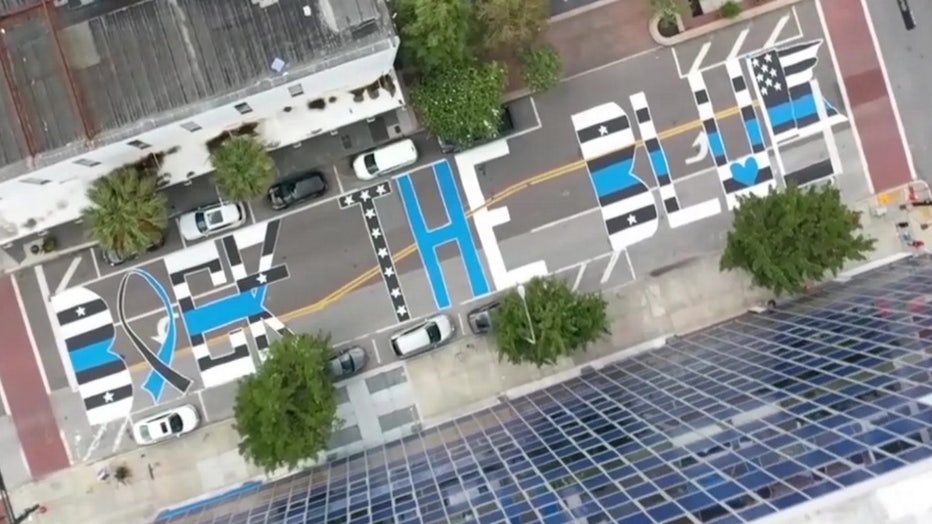 Earlier this week, FOX reached out to Castor’s office regarding the permit and the former police chief sent us a statement that reads, “Any tribute to honor their service is welcome. It’s unfortunate they didn’t see the permitting process through so that our community could participate in showing their appreciation for the brave men and women that service our residents every day."

PREVIOUS: 'Back the Blue' mural painted outside Tampa police headquarters

Crime Stoppers of Tampa Bay is offering a reward of up to $3,000  for information that leads to an arrest in this case. Anyone with any information who wants to be eligible for a cash reward is asked to call Crime Stoppers at 1-800-873-TIPS (8477), report anonymously online at www.crimestopperstb.com or send a mobile tip using the P3 Tips mobile app.