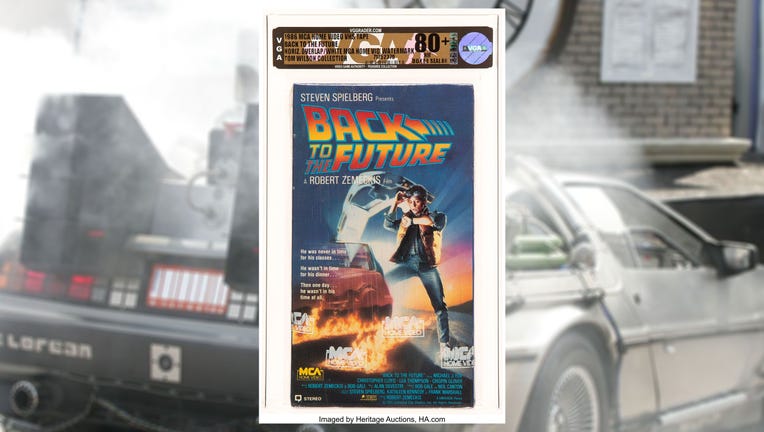 A sealed copy of "Back to the Future" once owned by Tom Wilson is pictured, superimposed over a file image of a DeLorean at the Countdown to the Final Flight of the Back To The Future Ride at Universal Studios Hollywood on Aug. 2, 2007, in Los Angele

A sealed copy of "Back to the Future" on VHS, owned by Biff Tannen himself, recently sold for a whopping $75,000 at auction and was likely the most ever paid for such an item.

The "near-mint-condition" videotape was owned by actor Tom Wilson, who appeared in the 1985 film and its sequels, and who received the tape from the studio at the time. It was sold to a collector in New York during Heritage Auctions’ sale on June 9 and was the highest price ever paid at auction for a sealed, graded VHS tape, the auction house said.

RELATED: "Back to the Future" documentary "Back in Time," streaming free on Tubi — get the app

The sale included 260 VHS tapes in total, featuring other near-mint copies of beloved 1980s films like "The Goonies," "Top Gun" and "Ghostbusters."

Heritage Auctions noted how the VHS format has become increasingly popular among collectors in recent years due to nostalgia and the "near-impossibility" of finding popular films still in their original shrink-wrapping.

"The results for Tom Wilson's Back to the Future tapes, for Goonies and Jaws and Ghostbusters and many others, were nothing short of amazing," Heritage Auctions VHS Consignment Director Jay Carlson said in a statement.

"A few years ago, sealed VHS collectors were outliers in the collecting community, so it really is something to see it grow and attract enough new collectors to warrant a standalone auction at a major auction house," Carlson added.

WATCH FREE ON TUBI: Trace the history of the tape with the documentary "VHS Revolution" — get the app

A near-mint Beta copy of the 1985 action-comedy "The Goonies" sold for $13,750, while a near-mint-plus VHS copy of "The Goonies," featuring the white wraparound Warner HV watermark sold for $50,000 — making it the auction’s second-highest-selling lot.

A mint-condition copy of the 1983 "Jaws" release, which features the wraparound MCA Home Video watermark, opened live bidding at $13,500 and ultimately sold for $32,500.

Top Gun: Maverick - The Power of the Naval Aircraft Featurette

Tom Cruise stars in "Top Gun: Maverick," in theaters May 27.

"Top Gun," which was the first tape considered affordable for purchase at around $26.95, also was included in the sale. A near-mint copy of the film sold for $17,500 and included a promotional offering from Diet Pepsi which changed the case’s cover and added its logo to the back.