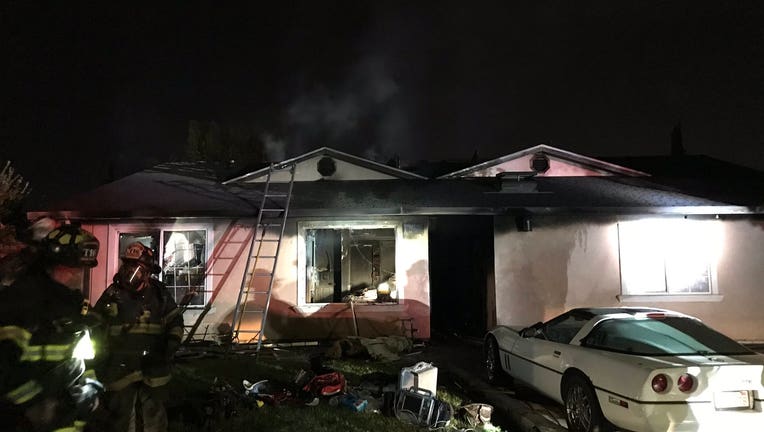 A house fire where one person was badly injured in San Jose.

A stolen-vehicle suspect was badly burned in a fire early Monday evening in San Jose, Santa Clara County Sheriff's Department said. The suspect is expected to survive and will be booked into jail upon his release.

The adult-male suspect, identified as Raul Anthony Rodriuguez, allegedly led law enforcment on a foot pursuit after a stolen vehicle task force spotted him in a stolen vehicle at Lewis and Senter roads at around 4 p.m.

When the task force attempted to stop the vehicle, sheriff's officials say the suspect fled on foot. Once a perimeter was set up in the area, officials learned the suspect had allegedly broken into a nearby residence on Santee River Court and refused to come out. San Jose Police Department assisted with the barricaded suspect.

Then the house the suspect broke into caught fire.

Firefighters were dispatched at 5:49 p.m. to the 600 block of Santee River Court at the request of law enforcement.

A two-alarm fire was burning a single-family home but law enforcement officers kept firefighters from the home until officers felt the scene was secure, fire Capt. Brad Cloutier said.

The home was pretty significantly involved in fire when law enforcement deemed the scene safe. Firefighters entered the home and rescued the suspect who suffered pretty severe burns, Cloutier said. The fire department had the fire under control about a half hour later.

Firefighters located the injured suspect inside. He was taken to a hospital for medical treatment as is expected to survive.

The home suffered significant damage in the fire.

"Inside it's pretty bad," Cloutier said.

The home is not habitable, he said.

Firefighters are investigating how the fire began.

Sheriff's officials said the suspect had a $25,000 felony warrant for burglary. The suspect will be booked into Santa Clara County's Main Jail when he's released from the hospital.