BART announced a milestone on Tuesday when they said service to San Jose will begin June 13. The Berryessa and Milpitas Stations will bring service into Santa Clara County for the first time.

Santa Clara Valley Transportation Authority (VTA) Board Chair Cindy Chavez, who is also president of the Santa Clara County Board of Supervisors, announced the $2.3 billion Berryessa project, which extends Bay Area Rapid Transit (BART) from the Warm Springs District in Fremont through Milpitas, into northern San Jose at the new Berryessa station. 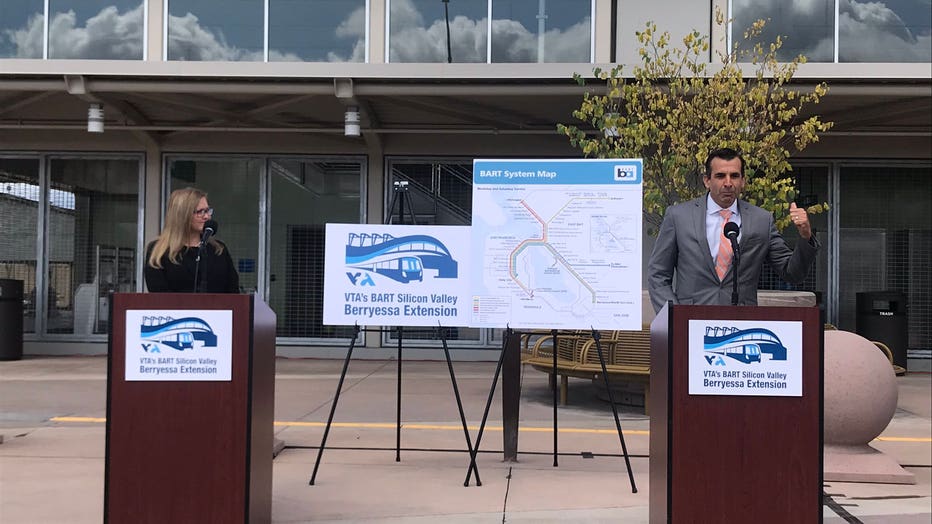 The Milpitas station will connect BART to both VTA bus and light rail service. Further south, the Berryessa Station will serve as a hub for BART train service and VTA bus service. The next planned six-mile stretch of rail will eventually go from Berryessa station through downtown San Jose and into Santa Clara.

The $5.6 billion second phase is expected to include the construction of subterranean stations at 28th Street in San Jose's Little Portugal, in downtown San Jose near the intersection of Santa Clara and Market streets, the San Jose Diridon rail depot and a ground-level station just north of Avaya Stadium in Santa Clara.

The second phase is expected to break ground in 2022, with an estimated completion date around 2030.

"This new 10-mile extension will serve tens of thousands of people every day," said Chavez, who thanked voters. "It is part of our tranformation to get out of their cars and on to public transportation."

San Jose Mayor Sam Liccardo attended the announcement event. He also thanked voters and the community's patience for the project that has been more than 20 years in the making.

BART said safety tests have been "completed, verified and accepted." The Project Safety and Security Certificate was signed at the ceremony.

"Silicon Valley as we all know is not just a region where folks have $94,000 cars." BART Board President Lateefah Simon said. This is a region of hundreds of thousands of folks who need to get to work, to hospitals, to visit their children and their families."

"Expanding travel options in one of the Bay Area's most congested
corridors is key to an economic revival," BART General Manager Bob Powers said.

The first train departs from the Berryessa station along the Richmond line at 7:56 a.m. The train will arrive at Milpitas about three minutes later, according to BART and VTA officials.

VTA has a slickly-produced video on their website of what to expect with the openings of the new stations on the orange and green lines. Information includes details on drop-off and pickup, bike lanes, parking options, ride share/taxi instruction and the tidbit that there will be 30 departures an hour.

Both stations will have parking garages and surface parking available.

This is BART's first venture into Santa Clara County. The expansion gives the transit agency a total of 50 stations.

BART ridership is at about 90% below its baseline due to the coronavirus pandemic.