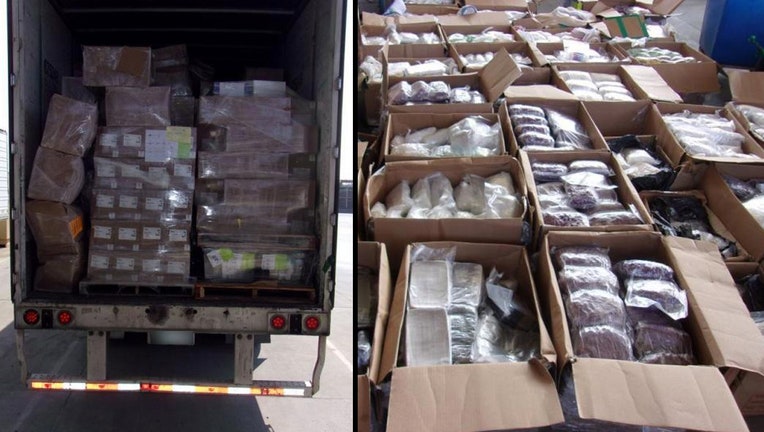 Photo by the U.S. Customs and Border Protection

SAN DIEGO - A suspicious U.S. Customs and Border Protection agent, who decided extra scrutiny was needed for a truck that was supposed to contain a shipment of medical supplies on Friday, was responsible for discovering more than 3,100 pounds of methamphetamine, fentanyl and other illegal substances – the second-largest ever bust of its kind along the southwest border, a report said.

The drugs, which were discovered at the Otay Mesa Port of Entry, in San Diego, were found in a truck that pulled into the commercial side of the border crossing, NewsNow Las Vegas reported Sunday evening.

CPB officers, using the port’s imaging system, found suspicious materials in the rear of the trailer, the report said. The trailer was sent to the dock and a canine alerted them to the boxes inside.

The shipment was unloaded before CPB discovered 1,816 packages co-mingled with the medical supplies. Included in the haul was approximately 3,014 pounds of methamphetamine, 64 pounds of heroin, 29 pounds of fentanyl powder and almost 37 pounds of fentanyl pills, worth an estimated $7.2 million, the official said.

“This massive seizure is testament of what law enforcement agencies can do when we combine forces — prevent over $7 million worth of deadly drugs from entering our country, thus saving countless lives from addiction and overdose deaths,” said DEA Special Agent in Charge John W. Callery.

The driver, a 47-year-old Mexican citizen, was arrested, the report said.

“This significant seizure is a prime example of how a successful partnership between HSI, CBP and DEA results in the disruption of transnational criminal organizations while protecting our country from dangerous illicit drugs,” said Juan Munoz, acting Special Agent in Charge of HSI in San Diego.