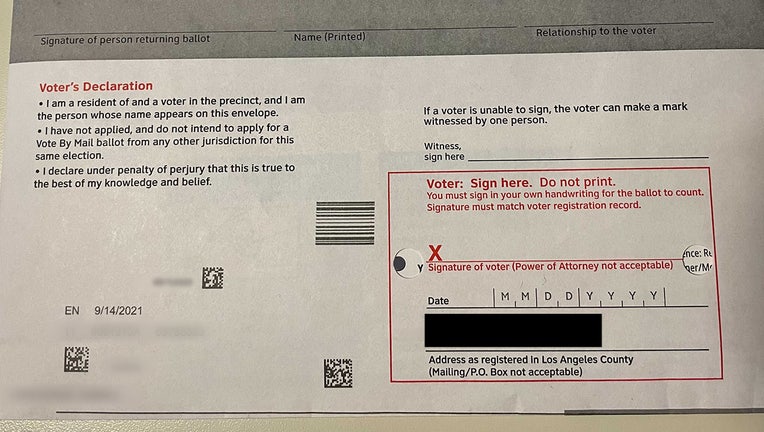 A recent video that's going viral on Instagram has raised concerns among Republican voters who marked "yes" on their gubernatorial recall election ballot.

The widely circulated video demonstrates that if the ballot is placed in a particular way in its return envelope, that "yes" votes can be seen from outside of the return envelope, heightening concerns over the potential for uncounted votes.

FOX 11 was able to replicate the issue on an official election ballot and reached out to the California Secretary of State's office.

Race for CA governor: Learn about the candidates who plan to unseat Newsom

The Los Angeles County Registrar's office said in a statement that the design of the ballot return envelope, which contains two small holes on each side of where voters are asked to sign the envelope, has been used for several election cycles -- and the design is a recommended accessibility practice by civic design consultants.

Monday marked the first day of mail-in ballot voting for California's election on whether or not Governor Gavin Newsom should be recalled. Newsom needs 50% or more of voters to vote 'no' on the recall to stay in office. KTVU's Jana Katsuyama reports getting Democrats mobilized may be difficult.

"The intent and purpose of the holes are two-fold, to assist with accessibility for low vision voters to locate where to sign the envelope and to ensure no ballots were missed and left in envelopes once our office has received and processed them," the Registrar's office wrote in the statement.

Officials with the Registrar's office noted that voters have control of how they place their ballot in the envelope and have multiple options for returning their ballots to ensure secure and appropriate handling, including by mail, ballot drop box or at an official vote center.

They also recommended that voters track the status of their returned ballot through Ballot Trax – a free tracking application operated by the Secretary of State that will notify the voter when our office received the ballot and that it will be counted.

Voters will be asked two questions: First, should Newsom be removed, yes or no? The second question is a list of replacement candidates from which to choose.

If a majority of voters approve Newsom’s recall, the candidate who gets the most votes becomes governor. If Newsom is recalled, it’s likely his replacement could be elected with just a fraction of the votes. With dozens of candidates dividing those ballots, it’s possible a winner could get 25% or less.