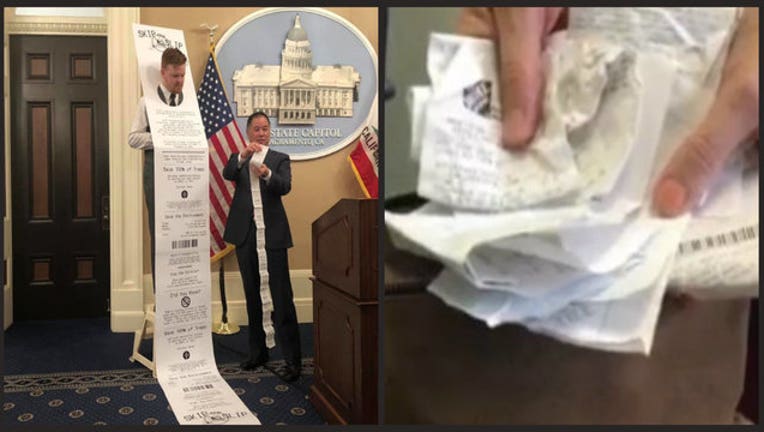 (FOX 11) - A new bill introduced in the California Assembly would make the state the first in the U.S. to require businesses to offer digital receipts unless customers ask for paper copies.

Phil Ting is a Democratic Assemblyman from San Francisco that first introduced legislation of the bill.

It's being referred as the, 'Skip the Slip' bill. It was approved by a state assembly committee on Monday.

The legislation would make e-mailing receipts the standard practice for businesses making over one-million dollars per year.

'Skip the Slip' highlights cost-effective digital and non-toxic solutions for retailers to protect their employees and customers, and reduce their impacts on the environment, while reducing fraud and increasing sales.'

Ting cited studies by the Environmental Working Group and the Centers for Disease Control and Prevention that show retail workers have higher concentrations of BPA or BPS than those who do not have regular contact with receipts.

Some critics argue that the change could increase cybersecurity risks if a store's database is ever hacked.

If the bill is passed it would require all businesses to provide proof of purchase receipt electronically starting in 2022.