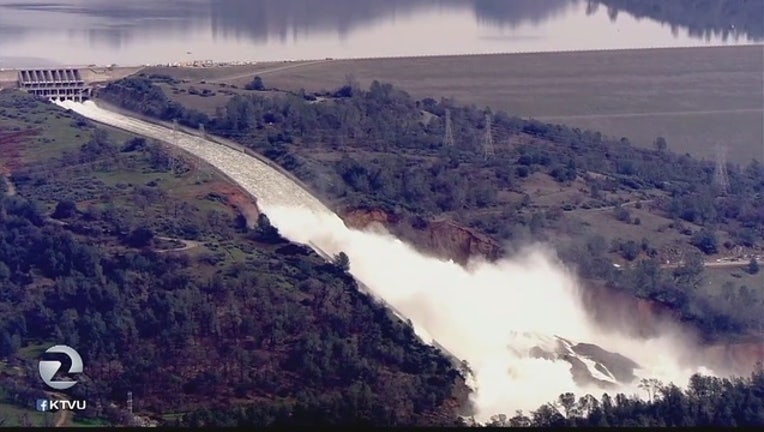 SAN FRANCISCO (AP) -- California lawmakers blasted state water officials Thursday for their oversight of the half-century-old dam that anchors the state's water system, in a hearing focusing on the design problems and aging that contributed to the evacuation of nearly 200,000 people downstream.

"This frightens me, that this was built in this manner," state Assemblyman Jim Frazier, a Democrat, and an engineer by training, told the state officials overseeing the Oroville Dam, the nation's tallest.

Frazier cited post-crisis inspection reports of concrete as thin as the width of the palm of a hand on Oroville's main spillway. "We have some things we need to address so this doesn't happen again."

Both water-release spillways at the 770-foot (235 meter) high dam, completed in the late 1960s, washed away during heavy rain and snow in February. Authorities ordered the evacuation of people in parts of three counties downstream, for fear that water was about to spill out of the lake -- the state's second-largest -- and roar through cities and towns.

In a hearing in Sacramento on the crisis, lawmakers cited emerging technical reports from two independent teams of experts on the Oroville Dam's two spillways. Problem areas identified so far include concrete that was far thinner than modern standards call for, cracks, tree roots that had blocked spillway drains, and bedrock anchoring the dam that was far weaker than assumed.

Public and private dam-safety officials say the investigation into the problems at the Oroville Dam are being watched nationally, for lessons and warnings about the nation's other aging dams.

"The culture of monitor, watch, patch, and paint the crack, must be corrected," said James Gallagher, a Republican Assemblyman who had been one of the people downstream of the dam evacuating with an hour's notice on Feb. 12. "It risks the lives of my constituents and the complete shut-down of California's water system."

California Department of Water Resources officials have repeatedly acknowledged that the earthen dam was designed to looser standards than today. David Gutierrez, a consultant for the state water agency, told lawmakers that the state's inspections of the spillways before the crisis had fallen short.

"Obviously we've got to take a look at the process, because it didn't work," Gutierrez said of the state's routine for inspections of the Oroville dam's main spillway.

Bill Croyle, acting director of the state water agency, rejected complaints from some critics that the state had focused on Oroville Dam as a water supply for roughly two dozen water companies and about 26 million Californians, rather than as a flooding threat to communities below. "The decisions we've had to make ... are focused on public safety as No. 1," Croyle said.

Additionally, Croyle and John Laird, the state's secretary of natural resources, pointed to water districts that get their water from Oroville as the main entities responsible for paying to repair this winter's damages. The state currently puts the cost of managing the spillway crisis and repairing the damage at more than a half-billion dollars.

The Department of Water Resources said earlier this week it was asking the Federal Emergency Management Agency to fund 75 percent of all construction costs, on the grounds it was a public-safety emergency. Federal authorities have not yet responded publicly.

Asked by lawmakers to explain the state's plans for funding the repairs, Laird pointed to water districts in Central and Southern California that get water via the Oroville Dam.

"We've got a contract with the state water contractors, so that's where it starts," Laird said. "They pay."