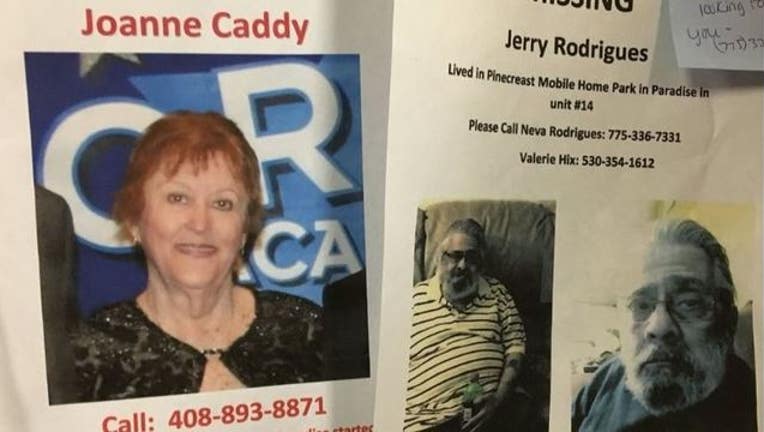 CHICO, Calif. - Now in it's thirteenth day, California firefighters reported on Tuesday that 75 percent of state's the most destructive and deadly wildfire is contained.

Since it erupted in Butte County on Nov. 8, the Camp Fire has scorched more than 150,000 acres, destroyed nearly 13,000 homes and killed at least 81 people, Cal Fire reported. Firefighters might even get a better handle on things in the next day or two, as rain is expected in Northern California on Wednesday.

As of Tuesday, the Butte County Sheriff reported that 699 people were still missing, down from nearly 980 the day before, as people get reunited with families and clerical discrepancies are accounted for.

For example, more than a dozen people were marked as "unknowns," without first or last names. In some cases, names were listed twice or more times under different spellings. Others were confirmed dead, and their names simply haven't been taken off yet.

Butte County Sheriff Kory Honea has said he released the rough and incomplete list in hopes that people would contact authorities to say they are OK. He has called it "raw data" compiled from phone calls, emails and other reports.

"We put the list out. It will fluctuate. It will go up. It will go down because this is in a state of flux," Honea said Monday. "My view on this has been that I would prefer to get the information out and start working to find who is unaccounted for and who is not. I would put progress over perfection."

Officials have also culled reports from the earliest hours of the disaster, when fire knocked out mobile phone communications and thousands fled, some to safe shelter that was hundreds of miles away.

Honea said his office was working with the Red Cross to account for people entering and leaving shelters. Evacuees are also helping authorities narrow the list, sometimes by chance.

Robert James Miles, who lost his Paradise trailer in the blaze, was staying at a shelter in Chico where people posted names of those they hadn't heard from. Miles said he alerted a Red Cross worker Saturday that he recognized eight names on the board as friends he knew were OK.

"Two of them were in the shelter," he said with a chuckle.

Owen and Phyllis Suihkonen understand the chaos. Their family is scattered after they lost their home to the wildfire, as did their two adult children.

Phyllis Suihkonen, 69, says she spotted the names of two friends on the list of unaccounted people, and doesn't know if they are safe. But her daughter has seen names of friends who are OK and called sheriff's officials to let them know.

"I'm concerned," Phyllis said. "But like I said, there's been other friends' names on the list that have been accounted for and taken off."

Meanwhile, those searching for bodies were in a race against the weather, as rain was forecast for Wednesday. The precipitation could help knock out the flames, but it could also hinder the search by washing away fragmentary remains and turning ash into a thick paste.