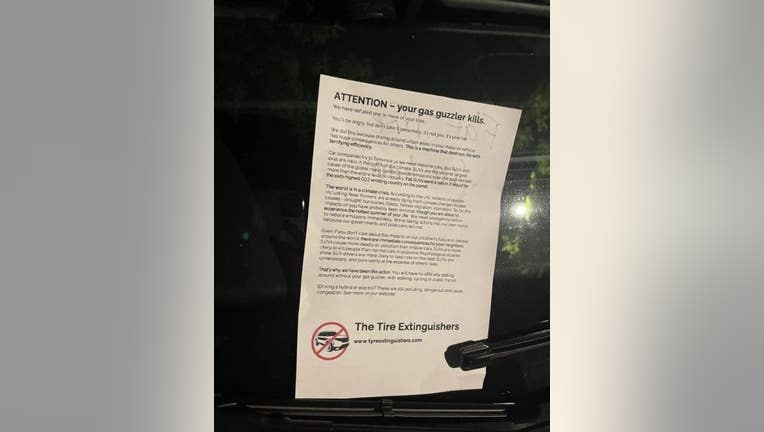 A group of climate activists has started a campaign to randomly slash tires of parked SUVs across the U.S. in an effort to curb greenhouse gas emissions.

The Tyre Extinguishers — a group that originated in the U.K. and has expanded to various European nations — conducted its first "action" in New York City this week. The group vowed to conduct similar operations in cities nationwide.

"We are rapidly expanding across the United States and are in touch with people in major cities across the USA," a spokesperson for the Tyre Extinguishers told Fox News Digital. "We expect this to expand massively."

The spokesperson referred Fox News Digital back to the group's website in response to a series of other questions. They didn't comment on the legality of vandalizing SUVs.

On Tuesday, the Tyre extinguishers celebrated "disarming" 40 SUVs in New York City's Upper East Side neighborhood. Participants of the action left flyers on each of the vehicles asking its owner not to "take it personally."

"We did this because driving around urban areas in your massive vehicle has huge consequences for others," the pamphlet said.

"The world is facing a climate emergency," it added. "We're taking actions into our own hands because our governments and politicians will not."

The group noted that it would slash tires of electric and hybrid vehicles as well since they also have a carbon footprint.

"On June 28, 2022 at 12:20am in front of 146 East 65 Street there is a report on file in the 19th Precinct for criminal tampering," a New York Police Department spokesperson told Fox News Digital in an email. "A 49-year-old male victim states upon returning to his vehicles he discovered one tire to each of his vehicles had been deflated."

The spokesperson added that no arrests have been made and that the investigation remains ongoing.

"The Tyre Extinguishers want to see bans on SUVs in urban areas, pollution levies to tax SUVs out of existence, and massive investment in free, comprehensive public transport," the group said in a statement Tuesday.

"But until politicians make this a reality, Tyre Extinguishers action will continue," the statement continued.

The group has conducted operations in the U.K., Austria, Germany, Switzerland, The Netherlands, Sweden and New Zealand.