Man sees color for the first time with corrective glasses

ANDOVER, Mass. - A man in Massachusetts who has been seeing the world through colorblind eyes finally saw more vibrant hues of red and blue thanks to a pair of color-correcting glasses.

Video shared March 16 by Star Ely shows her husband, Lucho, putting on the glasses and walking through the town of Andover, Massachusetts, just outside of Boston.

"Lucho had an appointment with a colorblind specialist today," Ely wrote on her Facebook post. "This is his first experience seeing color."

In the video, Ely follows her husband as he walks out of the specialist’s office and onto the sidewalk. Immediately, he notices the lime green doorway.

"This door is yellow? Green?" he asks, to which she replies, "lime green."

"See, that’s something I didn’t see on the way in," Lucho says. 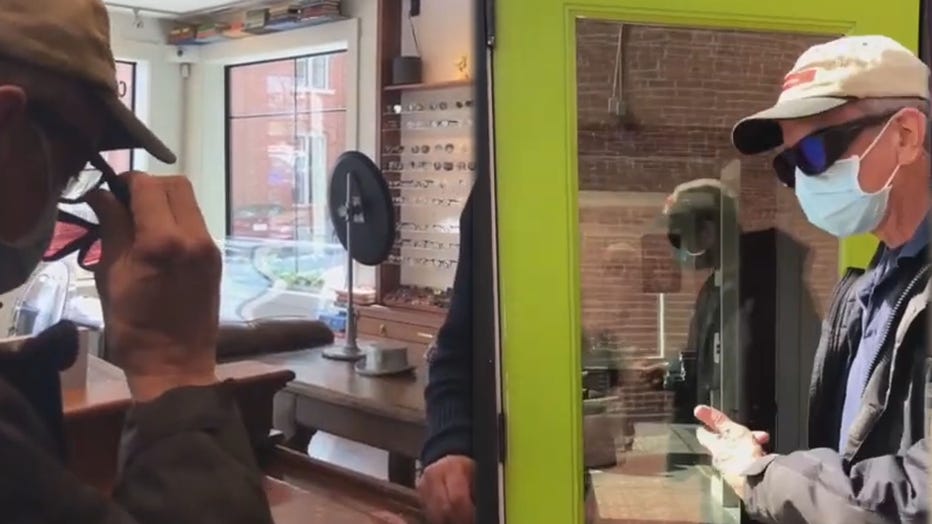 Lucho is pictured in the endearing video filmed by his wife, Star Ely, on March 16, 2021 in Andover, Massachusetts. (Photo credit: Star Ely via Storyful)

As he walks down the public sidewalk, Lucho soon notices the "screaming red" on store signs and says the stop sign at the corner "has a different red than it used to."

"I can see blue but not that blue," he says, looking at an ADT security sign displayed in a store window. "I never thought there is a blue like that."

Ely added in her Facebook post that she stopped filming as a loud emergency siren drove by, which Lucho said was his first time ever seeing "fire engine red."

Color blindness often happens when someone cannot distinguish between certain colors, usually between greens and reds, and occasionally blues, according to the American Academy of Ophthalmology.

There are also different degrees of color blindness with some suffering from a mild condition where they can see colors normally in good light but have trouble in dim light. Others cannot distinguish certain colors in any light.

RELATED: Colorblind boy has emotional reaction after seeing color for the first time in viral video

There are two types of cells in the retina that detect light called rods and cones, the AAO explains on its website. Cone cells detect color and there are three types: red, green and blue. The brain uses input from these cone cells to determine color perception.