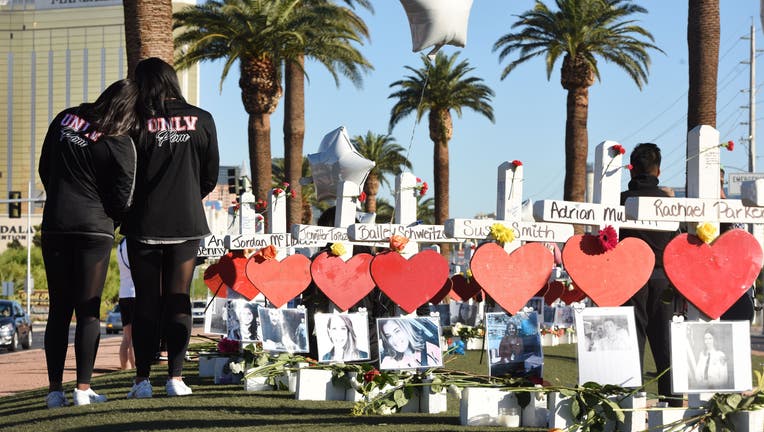 FILE - Members of the University of Las Vegas pom squad visit 58 white crosses for the victims of a mass shooting on the Las Vegas Strip just south of the Mandalay Bay hotel, October 6, 2017 in Las Vegas, Nevada. On October 1, 2017 Stephen Paddock ki

LAS VEGAS - The death of a California woman last November stemmed from wounds she received in the Las Vegas mass shooting in 2017, a coroner has determined.

The decision by authorities in San Bernardino County, California, could add Kimberly May Gervais to the list of 58 people killed in the deadliest mass shooting in modern American history.

However, Las Vegas police do not plan to adjust the death toll, said Officer Larry Hadfield, a department spokesman. He declined Tuesday to comment about Gervais’ death.

Gervais, of Redlands, was a quadriplegic after being wounded in the neck. She died at Redlands Community Hospital at age 57.

Her daughter, Amber Manka, of Corona, California, told the Las Vegas Review-Journal she wanted her mother remembered with victims of the shooting. The newspaper was first to report the coroner findings.

Gervais, a lifelong country music fan, attended the festival where the attack occurred with her friends Pati Mestas and Dana Smith, the Review-Journal said. Mestas, 67, of Menifee, California, died in the shooting.

Authorities said more than 850 people were injured, including more than 400 who sustained gunshot wounds, when a gunman firing military-style weapons rained bullets from 32nd-floor hotel windows into a concert crowd of about 22,000 at a country music festival on the Las Vegas Strip.

The gunman, Stephen Paddock, killed himself before police reached him in a suite at the Mandalay Bay resort.

Police and the FBI determined Paddock, a 64-year-old retired accountant and high-stakes video poker player, meticulously planned the attack and acted alone. They theorized he may have sought notoriety, but said they never determined a clear motive for the attack.

The Review-Journal reported that services for Gervais were held last month just outside her hometown of Kansas City, Missouri.