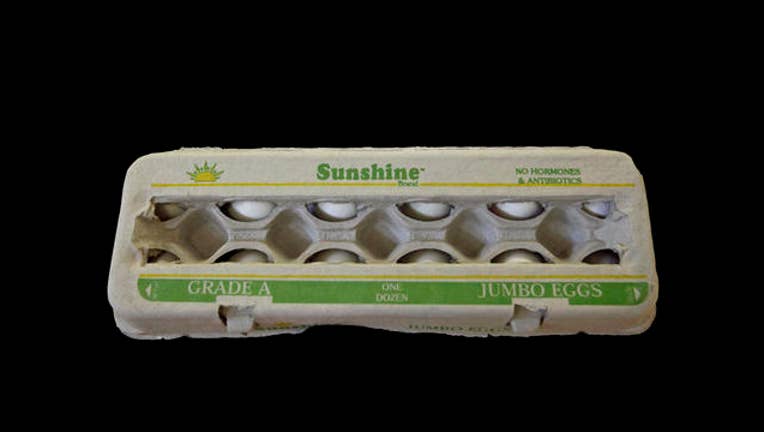 A warning sign about a possible Sunshine Extra Large Eggs' food-borne illness is posted at Trader Joe's Wednesday, Aug. 18, 2010, in Los Angeles. No eggs sold by Trader Joe's are affected by the recall. (AP Photo/Damian Dovarganes)

The 9th U.S. Circuit Court of Appeals said the Food and Drug Administration and three other federal agencies met the legal standard for acting reasonably when they considered but rejected the groups' request for label requirements.

The groups argued that some current labels, such as those advertising "natural" eggs, are misleading and that consumers are entitled to know because free-range eggs are allegedly more nutritious and less likely to carry a risk of salmonella contamination.

The organizations sued the agencies in federal court in San Francisco in 2013 after rule-making petitions submitted to the agencies by Compassion Over Killing in 2006 and 2007 were unsuccessful.

The appeals court upheld a summary judgment issued by U.S. District Judge Vince Chhabria in favor of the agencies in 2015.

The Food and Drug Administration had told the animal welfare groups that given its limited resources, it chose to pursue individual enforcement actions against misbranded eggs instead of developing an industry-wide rule on labeling standards.

The appeals panel said the FDA's explanation "barely meets" the requirement for reasonable consideration of a rule-making request, but said the agency has the authority to choose its own procedures and set its own goals for preventing false labeling.

The Animal Legal Defense Fund and Compassion Over Killing said they were disappointed by the ruling.

"The court's decision leaves the public in the dark regarding the cruel confinement of egg-laying hens, and consumers at the mercy of dishonest egg marketers," the two groups said in a statement.

"Nevertheless, we are undeterred, and remain committed to fighting for transparency in the egg industry," they said.