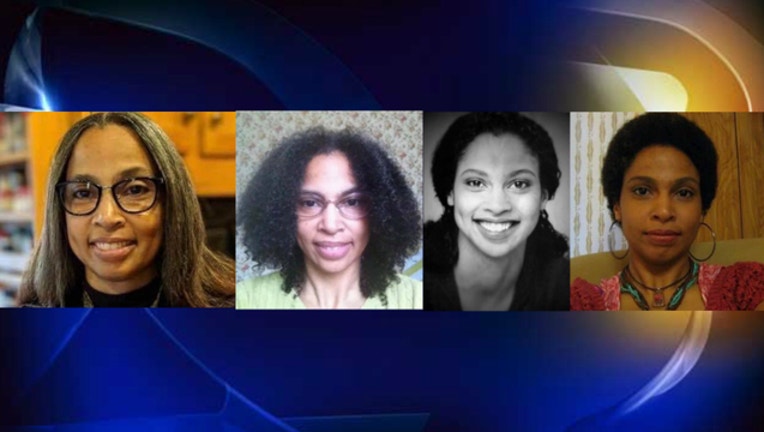 Mary Beth Haile Hofstein of Clayton, Calif. over the years has worn different hairstyle to work.

CLAYTON, Calif. (KTVU) - When Mary Beth Haile Hofstein of Clayton, Calif. would interview for jobs, she’d pull her kinky hair back in a tight bun or spend hours straightening it to a shiny sheen.

Then, when she’d worked at a place for six months or so, the mother of four and former medical industry employee, would let it go au natural: Most often sporting a medium-sized Afro.

It was then that she said she got looks and comments from managers.

“I was greeted with some dismay,” the 51-year-old said on Wednesday. “They’d start to treat me a little differently. It’s hard to quantify. I’d just get comments like, ‘Just be careful, make sure you stay within code.’”

Hofstein isn’t alone in her natural hair experiences that she said she encountered over nearly two decades working at Dominican Hospital in Santa Cruz, Kaiser Permanente in San Francisco, UCSF and when she worked at hospitals in Florida.

There have been too many anecdotes like hers to count.

But California state Sen. Holly Mitchell (D-Los Angeles) has been listening. She introduced SB 188, or the Crown Act, which unanimously passed 37-0 this week and is now on its way to the state assembly. Crown stands for "Creating a Respectful and Open Workplace for Natural" hair.

The bill updates the definition of race on the books to include “traits historically associated with race, including, but not limited to, hair texture and protective hairstyles."

If approved and signed into law, California would be the first state in the nation to create such a law aimed at ridding hairstyle discrimination based on race.

"Workplace dress code and grooming policies that prohibit natural hair, including afros, braids, twists, and locks, have a disparate impact on Black individuals as these policies are more likely to deter Black applicants and burden or punish Black employees than any other group," the bill states.

Speaking on the Senate floor on Monday, Mitchell added that until recently, searching Google Images for “unprofessional hairstyles” would only produce black women.

"However, there are still far too many cases of black employees and applicants denied employment or promotion — even terminated — because of the way they choose to wear their hair," she told her colleagues. "I have heard far too many reports of black children humiliated and sent home from school because their natural hair was deemed unruly or a distraction to others."

The Crown Act comes after similar guidelines were issued in February by the New York City Commission on Human Rights, which classified discrimination or harassment based on hair or hairstyle as a form of racial discrimination.

The guidelines specifically mention the right of New Yorkers to maintain their “natural hair, treated or untreated hairstyles such as locs, cornrows, twists, braids, Bantu knots, fades, Afros, and/or the right to keep hair in an uncut or untrimmed state.”

In practice, the guidelines give legal recourse to people who have been harassed, threatened, punished, demoted or fired because of the texture or style of their hair. The city commission can levy penalties up to $250,000 on defendants that are found in violation of the guidelines and there is no cap on damages. The commission can also force internal policy changes and rehirings at offending institutions, the New York Times noted.

The move in New York was prompted in part by investigations after complaints from workers at two Bronx businesses.

While many on social media praised the Crown Act of how they were “stared down” during an interview in San Francisco recently for her dreadlocks, others thought there are more important things that the Golden State should worry about.

“Really there are more important issues and they're wasting their time on hair... Good grief,” one man wrote on Facebook.

Another man wrote: “Honestly this makes absolutely no sense if where passing laws on hairstyles really?? How about fix the roads in contra costa county (sic) how about fix the inflation on gas prices our state waste so much time on dumb shit instead of fixing real problems.”

But for Hofstein, hairstyles – and being told that yours isn’t acceptable --  can be a real problem.

“This is serious,” she said. “It’s about getting hired. If you don’t have a job, you can’t feed your family.”

Hofstein said this bill is trying to right a wrong that her generation has dealt with since the 1960s. She knows. She comes from a family who has been fighting for civil rights for generations. The movie, "Wilmington on Fire," is about an incident regarding her great grandfather, Alexander Manly. Her grandfather, Milo Manly, was a well know activist who started the Philadelphia chapter of the NAACP.  And her father, Allen C. Haile, broke down a lot of barriers in the military and private sector and he also worked for San Francisco mayors Diane Feinstein in the 1980s.

“There was this unspoken understanding,” she said, “that if you are of my generation you straightened your hair so your natural-ness doesn’t show.”

She lauded the younger generation for being “more audacious.”