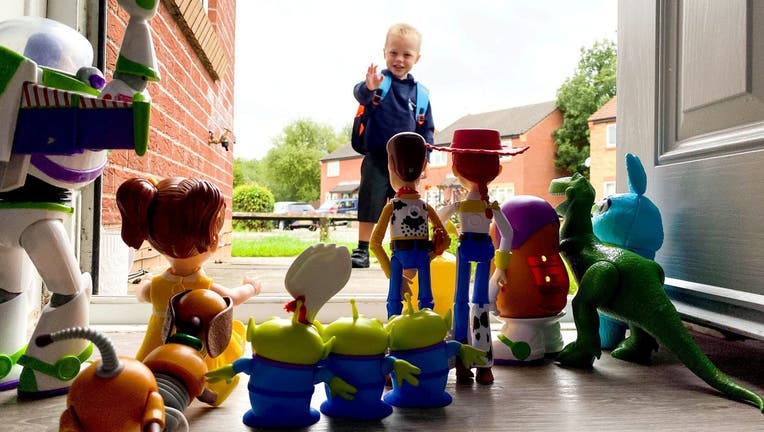 Vinny Donnelly, age 4, was all smiles while waving goodbye to his action figures from the Disney Pixar flicks. (SWNS)

See you later, Woody and Buzz!

A father in England recreated a famous scene from “Toy Story” to send his young son back to school, in a sweet photoshoot that has gone viral on social media.

Vinny Donnelly, age 4, was all smiles while waving goodbye to his action figures from the hit flicks, off to embrace the adventure of a new school year, news agency South West News Service (SWNS) reports.

The touching tribute was staged by dad Sean in the front doorway of the family’s home, referencing the emotional scene in “Toy Story 3” when character Andy leaves home for college. 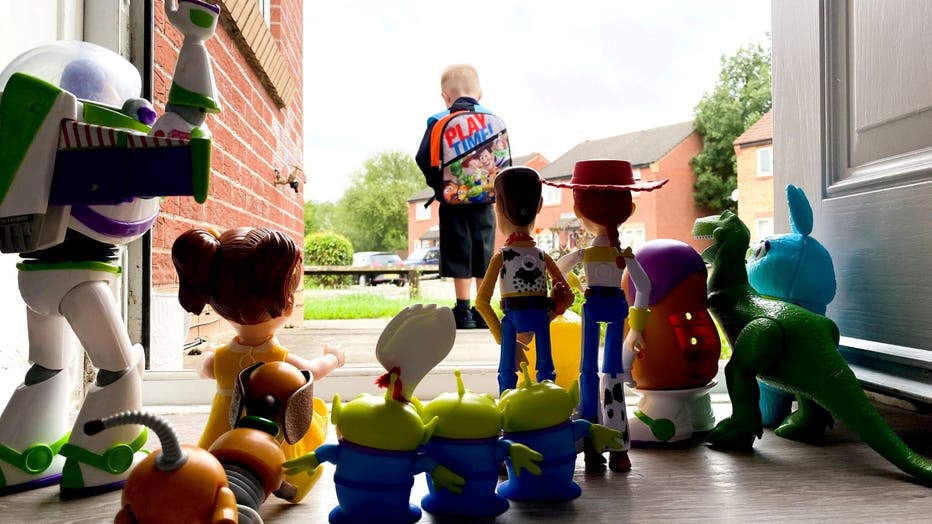 The touching tribute was inpsired by the emotional scene in “Toy Story 3,” when character Andy leaves home for college. (SWNS)

According to the outlet, mom Charlotte shared the precious pictures to Facebook, where they have reportedly gone viral with thousands of likes and shares.

“He’s a massive Toy Story fan and he has all the toys, characters and watches the films a lot,” Sean told SWNS of Vinny’s love for the Disney Pixar movies.

As for the heartfelt reactions to the photo op, Sean explained that “if you have got kids you kind of know that feeling.”

“My partner Charlotte shared it on a lockdown page on Facebook where it had over 30,000 likes and so many comments on it,” he claimed. “Lots of people found it emotional and [said] that it made them cry.”

“I tried to make it look dark inside where the toys were and light outside where he was. I wanted it to look like his future was bright, that sort of thing.”

In a larger sense, the parent mused that returning to the classroom during the coronavirus pandemic bears a unique set of challenges, amid a future of uncertainty.

“It’s been quite tough for all children really this year,” Sean said. “It’s a weird situation to be in and just starting school for Vinny has been strange for him.”

RELATED: Is it safe to reopen schools during the pandemic?

Guidance for masks in schools varies widely across the country

School districts across the United States have varying mandates and guidelines regarding student and teacher mask usage during the COVID-19 pandemic.

After sticking by his mother’s side for five months, starting school will likely push Vinny “out of his comfort zone for a while,” his dad speculated.

“Fortunately, he is loving it so far,” Sean added. “His older sister Darcy is in Year 3 now so he has her to go with him.”

“It’s quite scary with what is going on at the moment, even mentally for the kids,” he continued. “Being stuck at home, people wearing masks and washing your hands, it must be hard for them to go through.

“They are getting fed up too, wanting to see their friends and go out and do stuff more regularly.”

As his son begins a school year unlike any other, Sean is grateful to have captured a moment of the all-important first day.

“We will definitely blow it up and have it on the walls of our house somewhere,” he said of the photos. “It will be a great picture for him to have and look back on.”