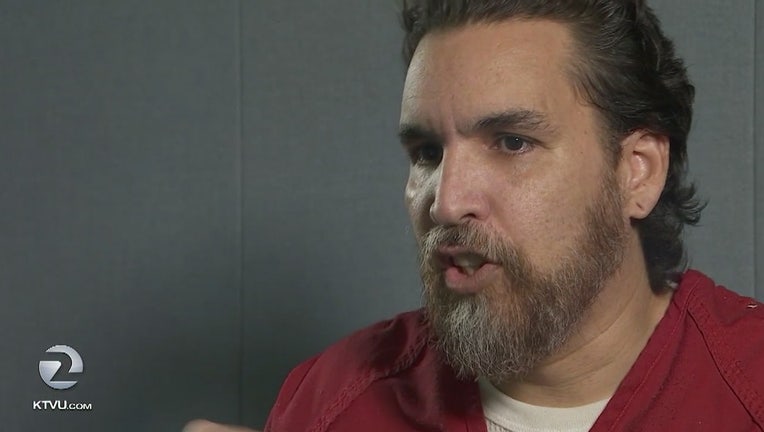 Derick Almena and his attorney are prepared for a second Ghost Ship Warehouse Fire trial.

OAKLAND, Calif. - The attorney for Ghost Ship master tenant Derick Almena said on Friday that he and Almena are ready for a second trial on 36 involuntary manslaughter charges for a fire at the Oakland building in 2016 that killed 36 people.

Almena, 49, returned to court for a short hearing on several minor legal matters in the case. He is charged in connection with the fire at a music party at the 10,000-square-foot warehouse in the 1300 block of 31st Avenue in Oakland's Fruitvale district that killed 36 people the night of Dec. 2, 2016.

The lengthy first trial for Almena, 49, and co-defendant Max Harris, the warehouse's artistic director, ended last Sept. 5 with jurors deadlocked 10-2 in favor of convicting Almena and acquitting Harris of all charges.

Harris was released from custody later that day but Almena remains in custody in lieu of $750,000 bail as he awaits his second trial.

Alameda County Superior Court Judge Trina Thompson ordered Almena to return to court on April 1 for a hearing on legal motions that are due to be filed by March 31.

Jury selection is expected to take at least a few weeks so opening statements aren't expected until late April.

After the short hearing, Serra said, "Not a lot occurred today, but we want a trial, the prosecution wants a trial and a trial has been confirmed."

That development means that Almena won't consider the possibility of a plea agreement with prosecutors, Serra said.

The veteran defense attorney said, "We're excited because we think we'll do better than in the first trial."

Serra said one reason for that is that the defense will be able to question members of the Ng family who owned the warehouse about their potential responsibility for the fire.

The Ngs were exempted from testify at the first trial because it was still possible that they could be charged for their role in the blaze but the statute of limitations for charges has expired and the defense will be able to call them as witnesses.

It's also possible that the defense will try to place some of the blame for the fire on PG&E, as electrical problems at the warehouse appear to have been a factor in the blaze, Serra said.

Prosecutors told jurors in the trial of Almena and Harris that the two men should be found guilty of involuntary manslaughter because they turned the warehouse into a death trap by creating unsafe conditions there, with no fire sprinklers, smoke alarms, lighted exit signs or stairs that were in good condition.

Prosecutors also alleged that Almena started violating the terms of the building's lease almost immediately after he signed it on Nov. 10, 2013, by allowing up to 25 people to live there even though it was zoned for commercial use, not residential use.

But defense lawyers said firefighters, police officers and Child Protective Service officials who visited the warehouse on multiple occasions never told Almena and Harris that the building was unsafe.

Defense attorneys also said there's evidence that the fire was an act of arson that Almena and Harris couldn't have prevented.

Betty Parker, one of the jurors in the first trial for Almena and Harris, attended Almena's hearing on Friday.

Afterward, she told reporters that she was one of the two jurors who voted to acquit Almena because she didn't think Almena had any criminal intent before the fire.

Parker said Almena thought the warehouse was safe because he and his family lived there and said "a lot of people shared the guilt" for the fire.

Parker said Almena "made mistakes that he has to live with the rest of his life and that's a horrible thing."