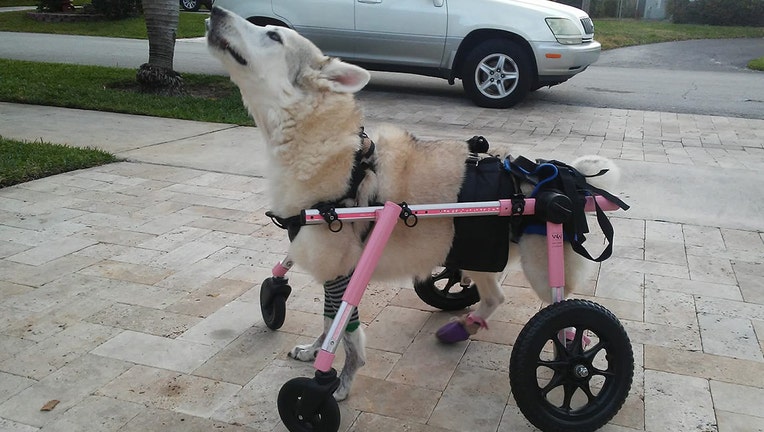 A disabled dog resting inside a car that was stolen in Florida last week — prompting the dog's desperate owner to plead for her return — has been found dead, a rescue group said.

Zorra, a 13-year-old Husky-Shepherd mix with paralyzed back legs, was found dead Monday, 100+ Abandoned Dogs of Everglades Florida posted online. The car the dog was stolen in reportedly was found Monday at an apartment complex in Sunrise.

"Zorra is gone, she is dead," Amy Roman, the founder of the group, said in a Facebook video. "I hope that they find this piece of s--- and he pays for what he did."

The Broward County Sheriff's Office said in a statement that "the investigation into the auto theft and death of the canine continues."

"Monday night, BSO Regional Communications received a call from a towing company regarding a blue 2005 Volvo that had previously been reported stolen," the statement said. "BSO deputies responded to the towing company and confirmed the car was stolen and confirmed a canine was found deceased in the car. Investigators are awaiting the results of a necropsy. No arrests have been made at this time."

The dog's owner, Wanda Ferrari, had left Zorra in an air-conditioned 2005 blue Volvo station wagon on Thursday while she ran into a Dollar Tree in Oakland Park. The dog, who typically used a pink wheelchair to get around, was lying on a pillow in the backseat, not in her wheelchair.

When Ferrari returned to her car, it was gone — and so was Zorra.

"I was in shock. And you know, the shock wore off," Ferrari told WFMY-TV. "And then, I was traumatized, and in tears, because my girl was in the back, you know. I'm like, 'Who would do that? Who would take a car with a dog?' They probably didn't know."

Rescue groups immediately pleaded for the dog's return. A pet detective was hired, and a $3,000 reward offered.

"All we care about is that somebody — anybody with compassion, that has children, that has a family, even the person that took the car — tell us, give us anything," Ferrari said to WTVJ on Monday, before Zorra's remains were found. "I don't care how you give us a clue; I don't care. Tell us where to find that dog."

Ferrari said the dog was her constant companion as she deals with a breast cancer recurrence.

Fox News' Morgan Phillips and the Associated Press contributed to this report.

NOTE: Previously reported that the stolen car was located in a pond in Lauderdale Lakes. The vehicle was actually found at an apartment complex in Sunrise.