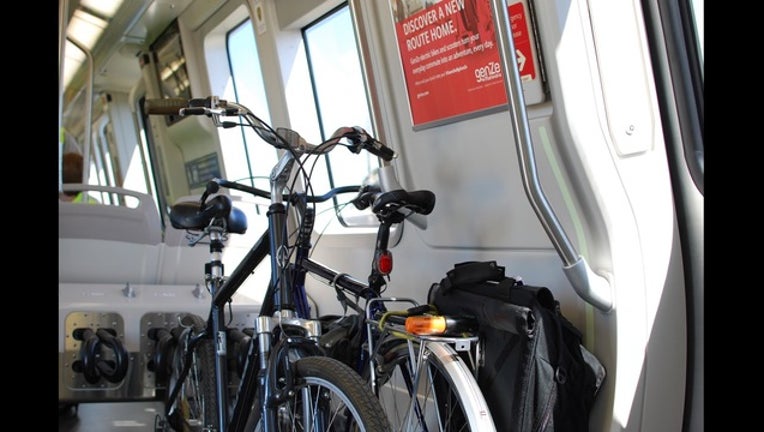 SAN FRANCISCO (BCN) - Efforts to encourage bicycling to BART are paying off as more people are biking to BART than ever.

In the next six years, BART expects that a tenth of its riders will use a bicycle to get to or from its stations, a projection that exceeds expectations.

During a presentation this morning on the progress of efforts to encourage biking, the BART Board of Directors learned that 6.4 percent of BART riders used a bicycle to get to or from stations in 2015, up from about 4.5 percent in 2012 and only 2.5 percent in 2000.

To get more people riding bikes, BART rolled back restrictions on taking bicycles on trains during commute hours, made more room for bikes in the cars, and added new parking options, including a bike shop with free valet parking near the 19th Street station in Oakland.

But the improved parking options might still be insufficient. The 19th Street station remains one of the most challenging to get bicycle parking and other stations with high bicycle use -- such as the 16th Street and 24th Street Mission stations in San Francisco -- have limited space to add new parking.

"Your aggressive approach to bike parking is, I think, the minimum we need to do," Director Robert Raburn told BART staff during this morning's meeting. "We're behind the curve in addressing the needs of the real growth center."

Director Gail Murray expressed some concern that, according to BART data, the proportion of riders choosing to bring their bikes on board trains rather than leaving them at the stations has been going up. In 2015, 75 percent of riders with bicycles took their bikes on BART trains, up from 60 percent in 2008.

But BART staff said this was to be expected once rules that banned bikes from train cars during commute hours were relaxed.

BART officials hope that new parking options on the way as well as a massive expansion of San Francisco's popular bike share program will help encourage riders to leave their bikes locked up rather than take them on the trains.

The directors admitted that lockers distributed at various stations haven't worked very well because they require getting a separate card to pay for them. This led some riders to lock their bikes to more traditional racks at stations like Ashby in Berkeley, despite the risk of theft.

New secure Bikeep racks that work with Clipper cards will be added in a demo soon at the 16th Street Mission and Pleasant Hill stations. BART has plans to open a new location for free valet bike parking at the MacArthur station in Oakland as well.

The Bay Area Bike Share program is slated to expand next year from 700 bicycles in the system to 7,000, finally bringing the popular program to Berkeley and Oakland and significantly expanding in San Francisco.

But BART is still working on accommodating riders who will continue taking their bikes on board the trains, adding 60 new straps to the bike areas on cars that will be able to secure multiple bikes on board. The agency's new "Fleet of the Future" cars, expected to begin going into service later this year, will feature built in bike racks.