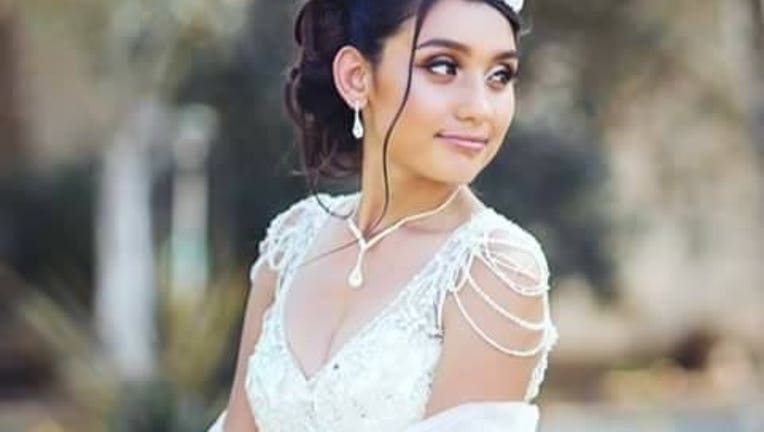 Photo of Aliciabelen Villa at her quinceañera in 2016. (Family Photo via GoFundMe)

ANTIOCH, Calif. - The family of 17-year-old Aliciabelen Villa, who the coroner on Thursday identified as the teen killed in an Antioch shooting, suffered two grave tragedies in less than a month.

Not only was the Freedom High School student shot to death on Tuesday evening in what Antioch police say was a drug deal gone bad. But her mother died of cancer about 30 days ago; her service was held on Sunday, according to family and friends who asked not to comment publicly about the double loss.

Aliciabelen's brother, who communicated to KTVU through Facebook messenger, said the family needed help. He pointed to a GoFundMe page organized by his mother's friend, Taylor Ramey, who also declined to say anything.

According to the mother's fundraising page, Aliciabelen, who went by A.B., was the only daughter of five children.

One of A.B.'s brother told KTVU that it was a struggle to pay for their mother's funeral, and now they have mounting expenses as they have to plan for his sister's.

"To now have to pay for another is too much," he said in a message. He provided a photo of his sister at her quinceanera in 2016, but he asked for some privacy and understanding in not wanting to talk about what happened.

A.B., who lived in Oakley, was shot to death about 7:10 p.m. when she was near Morro and La Jolla drives, according to Antioch Police Lt. John Fortner.

She was with a 17-year-old boy who was injured. A classmate said it was her boyfriend. He drove the two to Kaiser Antioch Medical Center on Sand Creek Road, where A.B. died in the emergency room, police said.

The boy suffered from a gunshot wound not considered life-threatening, Fortner said.

On Wednesday, police took a 16-year-old boy into custody in connection with the shooting. Police said he allegedly shot the couple during an illegal drug transaction. He was taken into custody in Oakley. Nothing else has been released.

The principal at Freedom High School in Oakley referred all questions about A.B. to Antioch police, who did not return calls.

Video at the scene showed a bullet hole had shattered the front windshield of a silver car that A.B. and the 17-year-old boy had been driving. There were at least five bullet holes in the car.

Those who wish to donate to Aliciabelen Villa's memorial costs can click here.

An Antioch police officer talks on the phone following a double shooting. Nov. 5, 2019

No suspect in custody after Antioch double shooting

Officers were called out about Tuesday about 7:10 p.m. to Morro and La Jolla drives after hearing several gunshots.