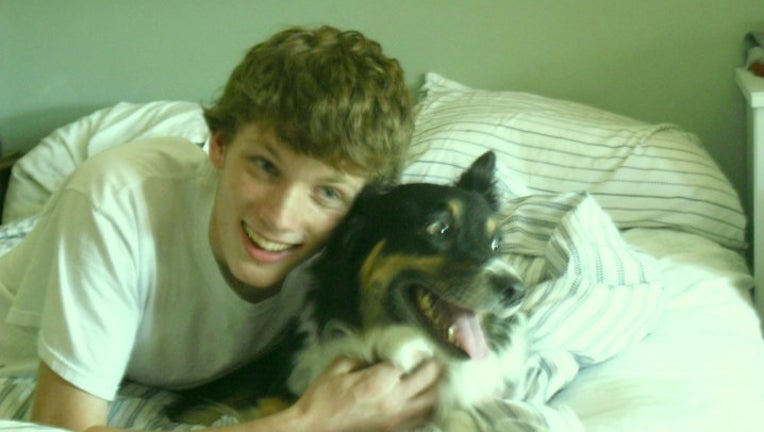 DUBLIN, Calif. - A Berkeley father is poised to sue the Alameda County Sheriff after his 25-year-old son died in custody at Santa Rita Jail from overdosing on antidepressants.

Scott Andrews filed a claim last month, alleging wrongful death and gross negligence, stemming from his son Jonah's death on Feb. 26. A claim is a precursor to a lawsuit.

The official cause of death was "acute fluoxetine toxicity," and the Alameda County Coroner ruled the young man's death an accident.

An incident report states that a cellmate saw Jonah Andrews snort a "white powdery substance" and then vomit after drinking what appeared to be an excessive amount of water on the day before he died. Jonah Andrews was being prescribed a generic type of Prozac and Zyprexa drugs, which help for depression, according to unredacted records his father showed KTVU. But it's unclear how he would have gotten this substance and what it was exactly.

The coroner's report noted that Jonah Andrews only had drugs in his system that were prescribed to him.

Jonah Andrews was one of two people who died in Santa Rita this year, a marked drop from prior years, although both deaths were men housed in the mental health behavioral unit. Since 2014, 47 inmates have died while in custody at Santa Rita, which has the highest-jail death rate in the Bay Area, according to an analysis by KTVU.

A spokesman for the jail referred questions to county counsel, who then referred the question to the clerk with the Board of Supervisors. The clerk declined comment, sending the request back to the sheriff. County counsel has yet to respond to the Andrews claim, which was filed by attorney David T. Duncan.

"People look for big misdoings, like if police shoot a man in the back. But this is not that. This is just a bad system. Where there are easy things that could have been done  but they weren't."

According to the claim, Jonah Andrews, a Berkeley High graduate, had been placed in Housing Unit 9, the mental health unit of the jail.

"He had all these problems," Scott Andrews said. "But he was always very caring. He was a carpe diem kind of person."

His father told KTVU that his son suffered from schizoaffective disorder. Jonah Andrews had been in and out of jail and had been receiving help through the county's mental health court and a program called Bay Area Community Services, or BACS. He was back at Santa Rita this time because he failed to show up for a court date, after breaking into his father's house, something his dad said he did because he heard voices telling him to do so.

On the morning of the day he died, other inmates said they had seen Jonah Andrews near the water fountain drinking unusual amounts of water and vomiting, according to the incident report. A deputy had been told that he had been "overdrinking" and vomiting. The deputy asked if Andrews wanted medical attention and the young man said no, according to the incident report.

Still, the deputy "did not summon any medical aid for Andrews," the claim states.

Then, after learning about Andrews' issues, the young man was left alone in "medical distress" for over an hour, despite a requirement that staff must observe inmates in the mental health unit every 30 minutes. Deputies missed at least two opportunities to assist Andrews in his cell between 12:15 p.m. and 1:33 p.m., the claim states.

When deputies arrived to find Jonah Andrews turning blue, it was too late. He was pronounced dead shortly after.

"People look for big misdoings, like if police shoot a man in the back," Scott Andrews said of his son's death. "But this is not that. This is just a bad system. Where there are easy things that could have been done  but they weren't."

Scott Andrews said his son was a caring person who loved his dog, Jojo so much that their ashes were buried together in a memorial forest. And his dad said Jonah Andrews was kind to his siblings and friends. 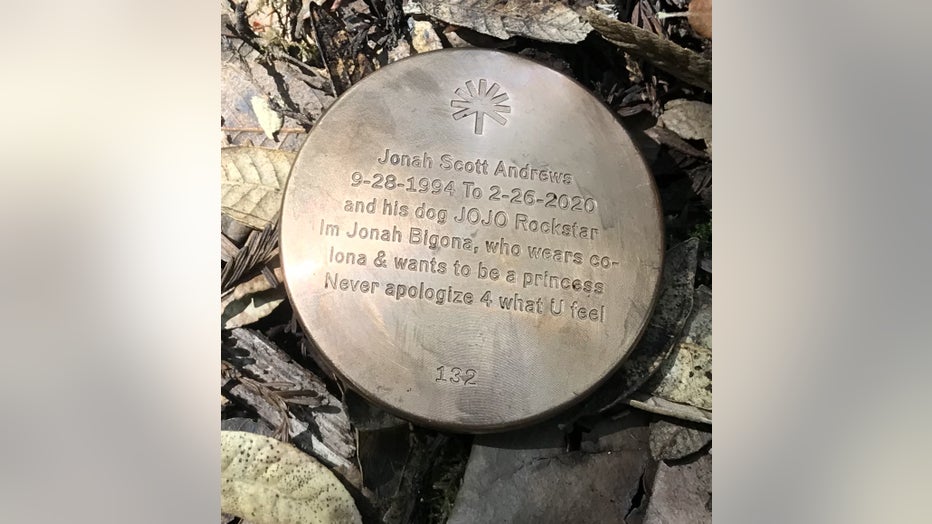 The ashes of Jonah Andrews and his dog, Jojo, are buried in a memorial forest.

But he began to battle issues in his sophomore year in high school, when his mom, who was mentally ill, died.

About three years ago, Jonah Andrews began to hear voices, his father said. He worked for a time at Le Coco's Italian Restaurant on Shattuck Avenue, but like his court dates, often wouldn't show up. His father said one time, he asked his son why he didn't go to work. Sometimes it was because he heard voices. But one time, his son said it was because he wanted to help a troubled friend.

On this last occasion in Santa Rita, Scott Andrews said his son had been poised to get released to a transitional house, where he had a caseworker who would be assigned to him. But he needed a tuberculosis test first. Scott Andrews said his son said medical staff at the jail hadn't given him the test, which is why he was held up behind bars for about a month. It's unclear why the TB test was held up for about a month.

Kara Janssen is a prison rights attorney who sued the sheriff in 2018, alleging the mental health care of inmates at Santa Rita Jail is not adequate. She is not associated with Jonah Andrews' case, but she is aware of similar issues because of her class action suit.

She noted that the number of deaths at Santa Rita is indeed lower this year compared to previous years, noting that is a positive trend. But she added that because of coronavirus, the jail population is also significantly decreased.

Janssen's firm has been notified of 25 suicide attempts this year at the jail, which she called a concerning number. She did add that she was pleased, however, that none so far have been successful as deputies have been able to prevent them from happening.

As a result of her suit against the county, Janssen said that there are more deputies working on mandatory overtime to help out at the jail.

"It helps when you have more bodies," she said. "But this system is also not sustainable."

As for whether the jail should be responsible for someone's drug overdose, both Janssen and Scott Andrews said there is a reasonable expectation when someone is in custody they will be cared for and supervised.

"A lawsuit is a way of communicating with the system that you need to provide a safe facility," Scott Andrews said.

For now, Scott Andrews is left to live the rest of his life wondering what his son would have become.

"He hadn't achieved much yet," Scott Andrews said. "But you always hope he would have. It's a loss of that potential."