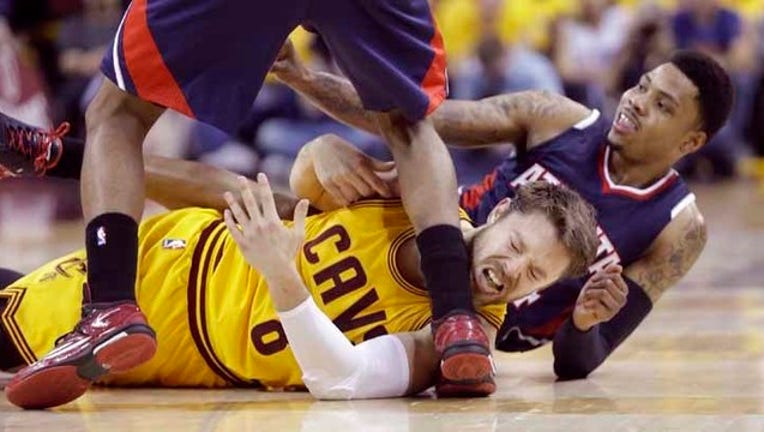 INDEPENDENCE, Ohio (AP) -- The kid was fearless, relentless, a hustler.

Growing up in tiny Maryborough, Australia, Matthew Dellavedova tried every sport. And no matter if it was playing basketball, soccer, Aussie rules football, tennis, cricket or field hockey, the Cavaliers backup point guard went after the ball with disregard for his body.

"He's always been that way," said his 77-year-old grandfather, Alan Dellavedova, who watches all of Cleveland's games in Australia. "He doesn't leave anything out there. What he has, he gives. And if he sees the ball, he wants it."

It's been that way in the NBA playoffs.

Dellavedova has become a cult hero in Cleveland, where his play has endeared "Delly" to teammates and fans, who relate to his approach and undrafted underdog story.

It's the exact opposite in Chicago and Atlanta, where he's a villain who crashes into players' knees and irritates opponents.

As he and his Cleveland teammates prepare for this week's NBA Finals against Golden State, the once obscure Dellavedova has been thrust into an unlikely spotlight. It's new territory for the easygoing 24-year-old, who has grown a scratchy beard during a postseason in which he's raised his game while All-Star Kyrie Irving battles knee and foot injuries.

In the closing moments of the Cavs' series-sweeping win over the Hawks, Dellavedova stepped to the foul line inside a rumbling Quicken Loans Arena and bathed in Cleveland's love as 20,000 fans chanted "Del-lee, Del-lee."

"I just wanted to knock the free throw down," Dellavedova said, smiling at his fresh memory of the ovation.

If not for Dellavedova's contributions, the Cavs may not have beaten the Bulls. With Irving on the bench in Game 6 with his knee wrapped, Dellavedova, scored 19 points to help Cleveland advance.

The points were a bonus from the 6-foot-4 Dellavedova, whose primary role is to provide defense and keep things going while Irving's off the floor.

Actually, Dellavedova's most impactful plays this postseason have come with him on the floor -- down, on the floor.

Against Chicago, he skirmished with Bulls forward Taj Gibson, who angrily reacted to Dellavedova scissor-locking one of his legs and was ejected. In Cleveland's series against Atlanta, Dellavedova lunged for a loose ball, rolling over and injuring Hawks shooter Kyle Korver, who was knocked from the series and underwent surgery. He also tangled with Atlanta's Al Horford, who threw an elbow, got tossed and then accused Dellavedova of being dirty.

Almost immediately, the Cavs came to Dellavedova's side with coach David Blatt insisting "he doesn't have an unsportsmanlike bone in his body."

Dellavedova said the outside comments stung, but he won't let them sink in.

"To call someone dirty is a pretty serious accusation," he said. "I wasn't happy with that. But you can't control what people think."

One of his Aussie mates has his back. Warriors center Andrew Bogut said he doesn't think Dellavedova is dirty and if Korver had reached the loose ball first, he likely would not have been hurt.

"If he sees a loose ball, if he has to box out a guy bigger than him, he'll do so. I don't think he's intentionally trying to take guys' legs out," Boguts said. "A guy you love to play with, I guess, and hate to play against. But I don't think he's dirty by any means."

Dellavedova only learned one way to play -- hard.

"You have to be able to put your nose in there and go get it," he said. "I don't know how it is in America, but in Australia, the first thing you're taught is that if you want to be a good player, you've got to go win the ball."

That goes in practice, too.

Irving, who coincidentally was also born in Australia, didn't know Dellavedova when the Cavs signed him last year out of Saint Mary's. From the moment the two matched up, tempers flared.

"It was almost a fist fight every day in practice," Irving said. "It wasn't that he was trying to be dirty or anything like that. It's just the way he is, his nature. It's that Australian blood."

Irving said he grew to love Dellavedova the same way fans do in Cleveland.

And in Maryborough, they're proud of the kid who won't give in.

"Matthew has always had a lot of energy, a lot of determination and was very competitive," said his mom, Leanne. "But he's always been very kind-natured, and most importantly, a good sport."